James A. Thomson, is an American developmental biologist whose pioneering work in isolating and culturing non-human primate and human embryonic stem cells has made him one of the most prominent scientists in stem cell research.

In 2007 James Thomson, with first author Junying Yu, published yet another pioneer paper in Science: "Induced Pluripotent Stem Cell Lines Derived from Human Somatic Cells." The same year Thomson became an adjunct professor at the University of California, Santa Barbara (UCSB). This professorship has not only allowed Thomson to collaborate in an interdisciplinary research initiative, but has also provided access to marine organisms, which are important to his interest in the evolution of pluripotency. In addition to being the John D. MacArthur Professor at the University of Wisconsin School of Medicine and Public Health and a UCSB adjunct professor, in 2008 Thomson became the Director of Regenerative Biology at the Morgridge Institute of Research.

Aside from his professorships and involvement in research, Thomson also founded a biotechnology firm in 2004: Cellular Dynamics International. He received venture capital from the Wisconsin-based Tactics II Ventures, to start this firm with the intention of applying his research in pluripotent stem cells to the medical field. This company has been using pluripotent stem cells in drug screening and development as well as personalized medical applications via such developments as a bank for individual stem cell lines.

Thomson was honored with the 2008 Massry Prize, which recognizes outstanding contributions to the biomedical sciences and the advancement of health. In 2008, he was also named one of Time magazine's 2008 most influential people, recognizing his importance in the field of science. 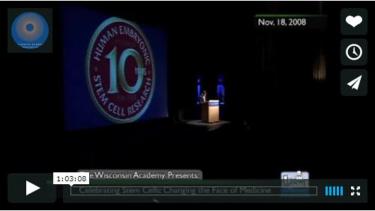