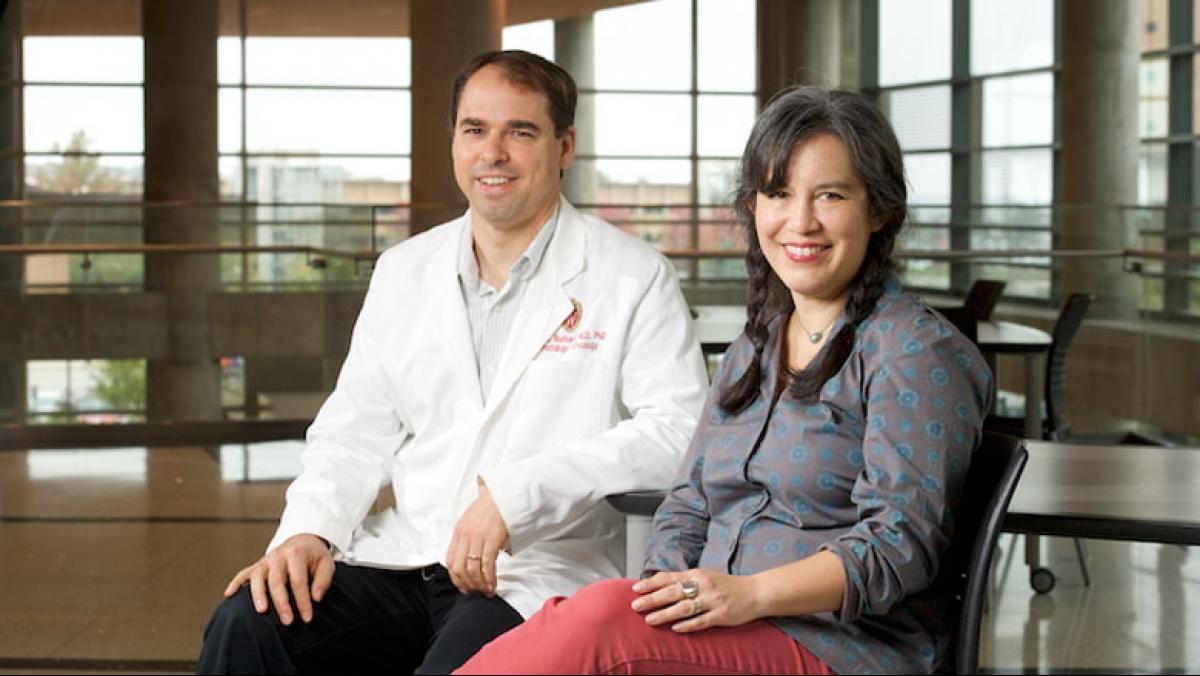 The search for the knowable has led to remarkable discovery and innovation in the sciences. At the same time, this unrelenting quest for knowledge has also fostered in many of us a sense of discomfort with ambiguity—and a detachment from our often-messy internal and external worlds. While both science and art provide us with a way of understanding the world, the latter can help us deal with ambiguity and uncertainty.

Artists, like scientists, study the structure and behavior of the world through close observation, investigation, and the testing of ideas. From the inventive works of Michelangelo and Leonardo Da Vinci, to the Modernists and their fascination with technology and artistic experiments in the laboratory, we see scientists who use art to give form to concepts and artists who use science to stretch what we see and know about ourselves—and the world around us.

Middleton-based installation artist Leslie Iwai uses close looking to discover repeating themes and narratives in her life and art. In this context of a “discovered narrative,” materials and methods are “welcomed in” by Iwai if they seem to be a good fit for a particular project.

Of her creative process, Iwai says. “You can’t make the work before you make the work.” Where some artists begin with an idea and move toward a specific destination, Iwai moves forward through uncertainty: she simply begins, going where the story takes her and believing that failure occurs only when she is not being true to the story, the materials, or herself.

Trained in mathematics, chemistry, and architecture, Iwai makes art that explores the underlying design and geometry found within diverse materials, from concrete and steel to feathers, fibers, and wax. For Iwai, process-oriented methods such as welding, casting, sewing, woodworking, crocheting, folding, even melting, all emphasize the handmade quality she considers crucial to the visual elements in her art. The tactile nature of her completed pieces and installations invites observers to find connections between the ideas she expresses and the materials used.

Making associations through research, discussion, meditation, metaphor, and observation, Iwai’s process is a rigorous one. It can’t be rushed. Slowly revealing themselves through her conceptual investigation, these associations shape the development of her work.

There are, however, some overarching themes that influence Iwai and thread through her art: contradiction between appearance and reality is one, as is the notion of communal experience. The elevation of devalued things—spaces, materials, and people—has each played a role in her creative choices. She often approaches dark or difficult topics with a lightness that makes them eminently accessible.

For instance, her 2004 installation in Omaha’s Elmwood Park, titled Sounding Stones, is deceptively simple yet emotionally complex. Employing her knowledge of architectural space and acoustics, Iwai created five permanent, large-scale sculptures that amplify the voices of those who enter them. Made from concrete and cast in fabric forms, these Sounding Stones resemble giant pillows, appearing soft and light in contrast with their roughly fifteen-ton weight. As part of her process, Iwai invited the homeless and indigent using the park to participate in decisions about the layout and placement of the Sounding Stones. Each inscribed with a word meant to be said aloud, Iwai’s Sounding Stones expand on the definition of sounding as a means to gauge depth or find evidence, and reflect her desire to provide a voice for those in the park who have none.

After moving to Wisconsin in 2011, Iwai was asked to create an installation at the Monroe Art Center. Her Interstitial Garden, which opened in 2013, explored the difficulty of change and the process of transformation. Most of the work in Interstitial Garden was suspended and featured multiple visual, material, and contextual connections to discover and enjoy depending on how you looked at the “garden.” Iwai said that she wanted people to see transitional space not as something “untended and barren,” but rather as “a rich place of growth.”

After viewing Interstitial Garden, Christie Bartels, a friend and rheumatologist at the University of Wisconsin–Madison, suggested to Iwai that these emotional spaces have a parallel place in human biology. Bartels noted that the interstitial spaces, or gaps, between brain tissues are more than just empty areas. Instead, they serve important functions in the restorative process of sleep.

An ensuing discussion about the biological as a mirror for the emotional led Bartels to suggest that Iwai might be interested in the work of Dr. Mark Burkard, a colleague of Bartels’ from the UW–Madison School of Medicine and Public Health who was doing some groundbreaking cancer research. Bartels offered to introduce the two.

Iwai hadn’t heard of Dr. Burkard’s work, but she knew the basics of cellular division. First comes the synthesis phase, when a duplicate copy is made of cell components, including the DNA-containing chromosomes in the nucleus. Then comes mitosis, when the two sets of chromosomes are physically separated in opposite directions, even though they are still in one cell. Finally, during cytokinesis, the one cell is cut into two daughter cells, thereby completing the process of mitosis.

In 2012, Dr. Burkard and colleagues at the University of Wisconsin Carbone Cancer Center were creating cells that had extra chromosomes by arresting the process of cytokinesis in order to keep both nuclei in the same cell. Binucleate cells often turn cancerous, and the team was hoping they could create and isolate cells that they could use to test particular treatments. Yet the team discovered that 19 out of 21 resulting cell colonies contained cells that had reverted back to normal chromosomal health. This self-restoration occurred when the abnormal binucleate cells divided to become normal daughter cells. These daughter cells then carried on the regular cycle of division, creating new colonies of healthy cells containing the normal 23 chromosomal pairs.

This is startling because abnormal cells are not expected to survive. And, if they do, it is thought that any subsequently generated cells will also be abnormal. Perhaps more shocking was Dr. Burkard’s discovery of how abnormal cells managed to divide outside the active mitotic phase. Until this discovery, it was widely believed by scientists that human cell division was possible only within the active mitotic phase.

Dr. Burkard’s discovery suggests that damaged cells have an innate ability to recover, an ability that somehow exists beyond what is considered normal for human cell division. This unique cellular ability needed an equally unique name, so Dr. Burkard and his research team turned to UW–Madison assistant professor of Classics William Brockliss for help. They came up with klerokinesis, which is Greek for “allotted inheritance.”

Iwai was inspired by the new term and the way it “pointed to something domestic, something enduring about the cell as a home that one leaves.” She pictured the process as a “type of escape hatch or route that the progeny of a cell would undertake in order to survive an unhealthy domestic space.”

However, as she learned more about the mechanics of how the cell divides, her thinking evolved. “It seems that with the contrasted form and literal multiple hours of construction of this long, slow cytoplasmic bridge, that [the separation] might be something different, something more gentle, a slow going, a long goodbye,” she says.

The more Iwai learned, the more she became fascinated by Dr. Burkard’s discovery—which today goes by the name cytofission—and the resilient human nature of human cells. Building on the idea of a cell’s apparent bias for recovery, regardless of allotted inheritance, Iwai began developing a new installation that expands upon themes related to cytofission through sculpture, text, drawing, and novel photographic processes. 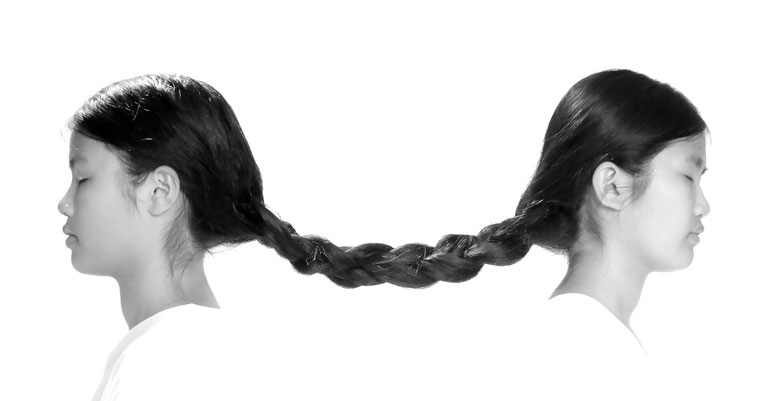 In Daughter Cells: Inheritance, Separation & Survival, a new installation at the James Watrous Gallery, Iwai attempts to conceptually connect our intimate human narratives to this story of cellular resilience and survival. Work constructed with found architectural elements, blown eggshells, red string, text, crochet, and resin create an enlarged sculptural rendering of a cytoskeleton—stretched and morphed during the process of cytofission—and the replicated progeny contained within. Iwai highlights a physical segregation that is belied by mirrored images and the connection of bloodline, reminding us that even in division we maintain our attachments. A photographic series relays this theme, with stark images of two sisters—alike but not identical—connected and yet at the same time divided by their DNA.

In composing Daughter Cells, Iwai considers her personal fissions as well. “A clean slate is not what I want,” she says, noting that there’s no such thing when it comes to relationships, no matter what form our separation takes. “We always take something with us—if not by choice, then by inheritance,” she says.

Iwai’s exploration of that which we inherit and that which we choose to take with us, led her to the use of gendered materials. Crochet, embroidery hoops, and sawhorses speak not only to the passage of time but to the domestic and traditional, passed to us from generations before. Inviting us to look closely at what is given, “microscope slides” made of window panes hold fragments of lace and other detritus labeled as attributes. 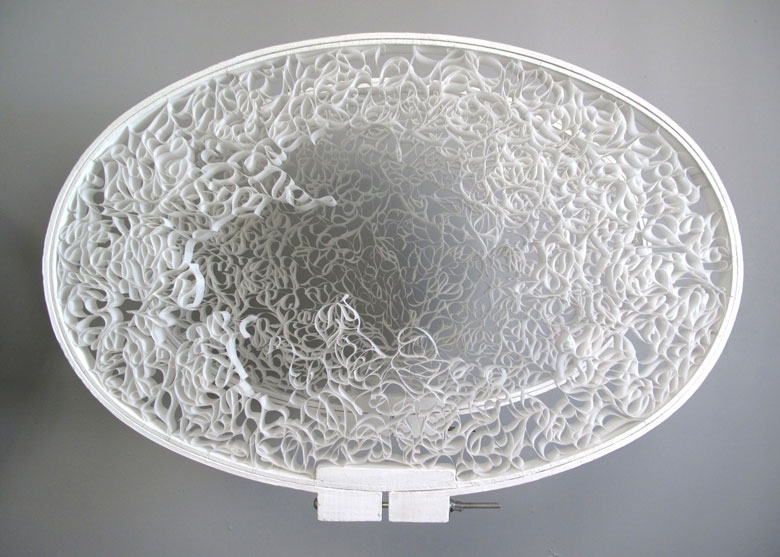 Matrix of My Mother, a representation of mitochondrial DNA contained within embroidery hoops, neatly suggests maternal links and the biology of inherited traditions. Sawhorses retrieved from Iwai’s family home are used to create rubbings, which are then transferred and enlarged to become multi-layered Mylar cutouts for Sawhorse Series: my father’s daughter, which adds a paternal reference that visually reminds us of the dual nature of our DNA inheritance.

Compelling us to consider our own inheritance, both chosen and genetic, Iwai includes the written responses from a recent artist residency where she first began exploring these concepts. She asked visitors to share three things that, in an escape, they would take with them. Objects, attributes, and implements are written on paper resembling chromosomal strands that spill from eggshells stamped Escape. For Daughter Cells, Iwai again invites others to share their stories of survival, separation, and inheritance in an interactive piece titled, Unwinding Narratives.

Ultimately, Daughter Cells: Inheritance, Separation & Survival extends the story of a cell’s recovery, relating it to a drama occurring on many levels. This installation incorporates methods that stamp, weave, signal, and bridge ideas that mimic and explore the scientific narratives that play out on the human stage every day. In doing so, Iwai interrogates our notions of escape—not in the negativity of emergency but as a hopeful disentanglement, a letting go and long goodbye—and examines what we have inherited over time. 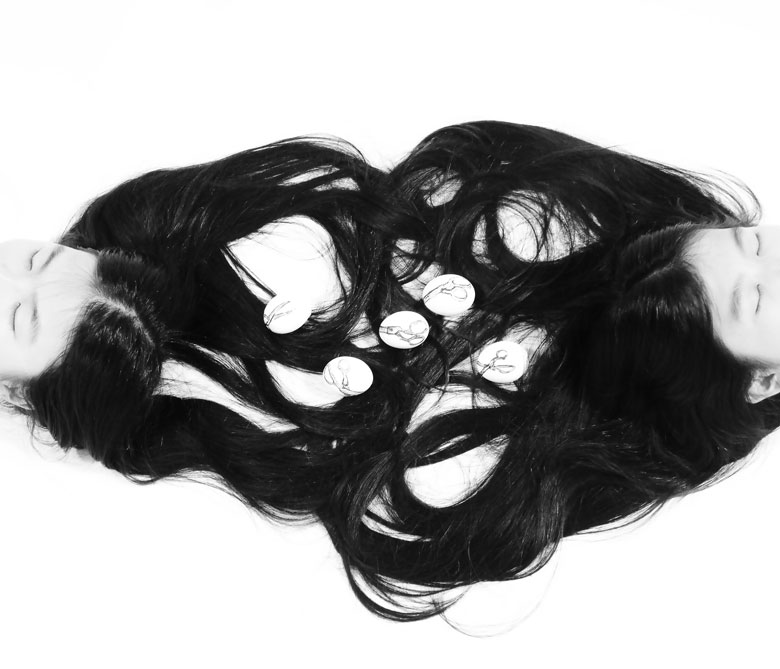 Lynne Harper is a writer and curator based in Milwaukee who works with ethnographic historical collections and contemporary global artists. She is currently studying non-Western art at The Sainsbury Research Unit in Norwich, Norfolk (United Kingdom) 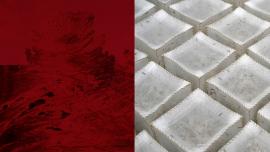 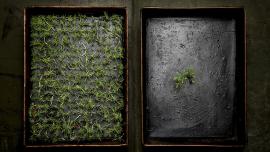 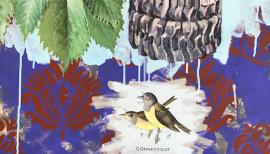