Dr. Chukuka S. Enwemeka joined UWM as tenured Professor and Dean of the College of Health Sciences on August 1, 2009, and was appointed UWM Distinguished Professor in 2012. Before coming to UWM, he served as Professor and Dean, School of Health Professions, New York Institute of Technology, Old Westbury, NY, for over six years. From March 1993 to February 2003, he was Professor (with tenure) and Chairman of the Department of Physical Therapy and Rehabilitation Sciences, University of Kansas Medical Center, Kansas City, KS, and from September 1989 to February 2003, he served as Associate Professor of Orthopedics and Rehabilitation, and Associate Director of Physical Therapy, University of Miami School of Medicine, Miami, FL. Dr. Enwemeka also held a joint appointment as Assistant Professor of Physical Therapy, Cellular and Structural Biology, and Physiology at the University of Texas Health Science Center at San Antonio, San Antonio, TX, from 1986 to 1989, before joining the University of Miami.
He received his BS and MS in Physical Therapy from the University of Ibadan, Ibadan, Nigeria and the University of Southern California, Los Angeles, Calif., respectively. He earned his Ph.D. in Pathokinesiology from New York University (NYU), and did his post-doctoral research training at NYU’s Rusk Institute of Rehabilitation Medicine.
He has authored more than eighty-five original research papers, monographs, and book chapters, and has presented hundreds of papers, seminars, symposia, and workshops nationally and internationally. Worldwide, Dr. Enwemeka is one of the foremost authorities in the area of photoengineering of tissue repair process with visible and near infra-red light and lasers. He is the Co-Editor-in-Chief of the international journal, Photomedicine and Laser Surgery, Past-Editor-in-Chief of another international journal, Laser Therapy, Past-President of the World Association for Laser Therapy, and Past-Chairman of the North American Association for Laser Therapy.
As a distinguished researcher, Dr. Enwemeka has secured millions of dollars in external grant funding and served as Board Member and Chairperson of the National Advisory Council on Medical Rehabilitation Research, National Institutes of Health (NIH), from 1998 to 2002. In addition to being a very successful grant writer, he has served and continues to serve on grant review committees for agencies such as the NIH, the Office of Special Education, U.S. Department of Education, the National Institute for Disability and Rehabilitation Research (NIDRR), the Research Grant Council of Hong Kong, and the Medical Research Council of South Africa. He is a Fellow of the American College of Sports Medicine and a Fellow of the American Society for Laser Medicine and Surgery, and is listed among Who is Who in Science and Engineering, 1991. Dr. Enwemeka’s academic career has taken him to thirty-nine countries and all but five of the 50 states in the union, either as a visiting professor, invited presenter, keynote speaker, visiting scholar, or as an invited guest of other universities. 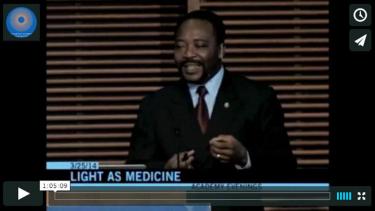 Video
Full Spectrum: The Promise of Light as Medicine