Now in his 18th season as Music Director of the Madison Symphony Orchestra, John DeMain is noted for his dynamic performances on concert and opera stages throughout the world. "

DeMain also serves as Artistic Director for Madison Opera and, until recently, for Opera Pacific, where he led an unprecedented seven-company co-production of Jake Heggie's Dead Man Walking in 2002. He is a regular guest conductor with Washington National Opera, New York City Opera, Michigan Opera Theatre and Los Angeles Opera, to which he returned in 2006-2007 to conduct highly acclaimed performances of George Gershwin's Porgy and Bess, the opera that has become his signature work.

DeMain opened Seattle Opera's 2011-2012 season with performances of Porgy & Bess and will conduct Verdi's Aida for Virginia Opera and return to Lyric Opera of Chicago for a new production of Showboat. In the summer of 2012, he'll return to the Glimmerglass Festival and future seasons will include returns to Washington National Opera and San Francisco Opera.

DeMain's orchestral world premieres includes Ned Rorem's Mallet Concerto, Daniel Catan's Suite from Florencia en Amazonas, and Joel Hoffman's The Forty Steps.DeMain was invited by Leonard Bernstein to conduct the world premiere of his last opera, A Quiet Place, and he has since conducted the American premiere of Philip Glass' Akhnaten, an operatic treatment of Astor Piazzolla's Maria de Buenos Aires, and the world premiere of Glass' The Making of the Representative of Planet Eight, based on the book by Doris Lessing. He also conducted the world premieres of John Adams' Nixon in China, Carlisle Floyd's Willie Stark and The Passion of Jonathan Wade, and Sir Michael Tippet's New Year.

DeMain began his career as a pianist and conductor in his native Youngstown, Ohio. After winning the Youngstown Symphony's piano competition at age 18, he went on to earn his Bachelor's and Master's degrees at the Juilliard School in New York. He made a highly acclaimed debut with the Pittsburgh Symphony Orchestra and was the second recipient of the Julius Rudel Award at New York City Opera. He was also one of the first six conductors to receive the Exxon/National Endowment for the Arts Conductor Fellowship-for his work with the St. Paul Chamber Orchestra.

DeMain holds honorary degrees from the University of Nebraska and Edgewood College. He was recently named a Fellow by the Wisconsin Academy of Sciences, Arts and Letters. He resides in Madison with his wife Barbara; their daughter Jennifer is currently a student at the UW-Madison. 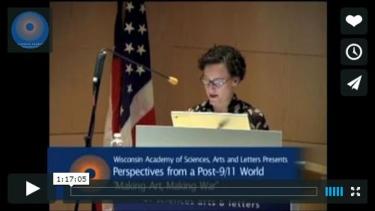 Video
Making Art, Making War: The Role of the Arts in Response to Tragedy