John D. Lyons is a fisheries scientist and ichthyologist—a person who studies and protects fishes and their habitats—at the University of Wisconsin–Madison. He was born in New York City and grew up in the country near Poughkeepsie, NY, where he fished local streams and ponds and became fascinated with the natural world. Lyons graduated with a BS in Biology from Union College in Schenectady, NY, and came to the University of Wisconsin-Madison for graduate school in 1979 and fell in love with the city.

After receiving his MS and PhD in Zoology from UW–Madison, Lyons was hired as a fisheries research scientist with the Wisconsin Department of Natural Resources to work with resource managers to conserve and improve fish populations and their habitats. Lyons remained with the DNR in fisheries research, eventually becoming a research supervisor; a position he held for 32.5 years until his retirement in 2017.

When Lyons began with the DNR, he was also appointed as adjunct curator of fishes at the University of Wisconsin Zoological Museum, a position he presently holds. At the Zoological Museum, Lyons developed a collaborative, international research program on the ecology and conservation of Mexican freshwater fishes. Since retiring from the DNR in 2017, Lyons has expanded his work at the Zoological Museum to also include studies on Wisconsin and Upper Midwest fishes.

During his time at both the DNR and Zoological Museum, Lyons published over 180 scientific and popular articles on fishes and aquatic habitats. 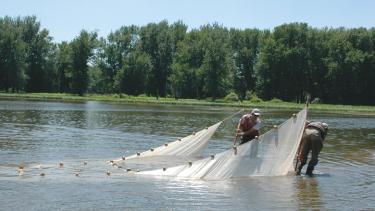