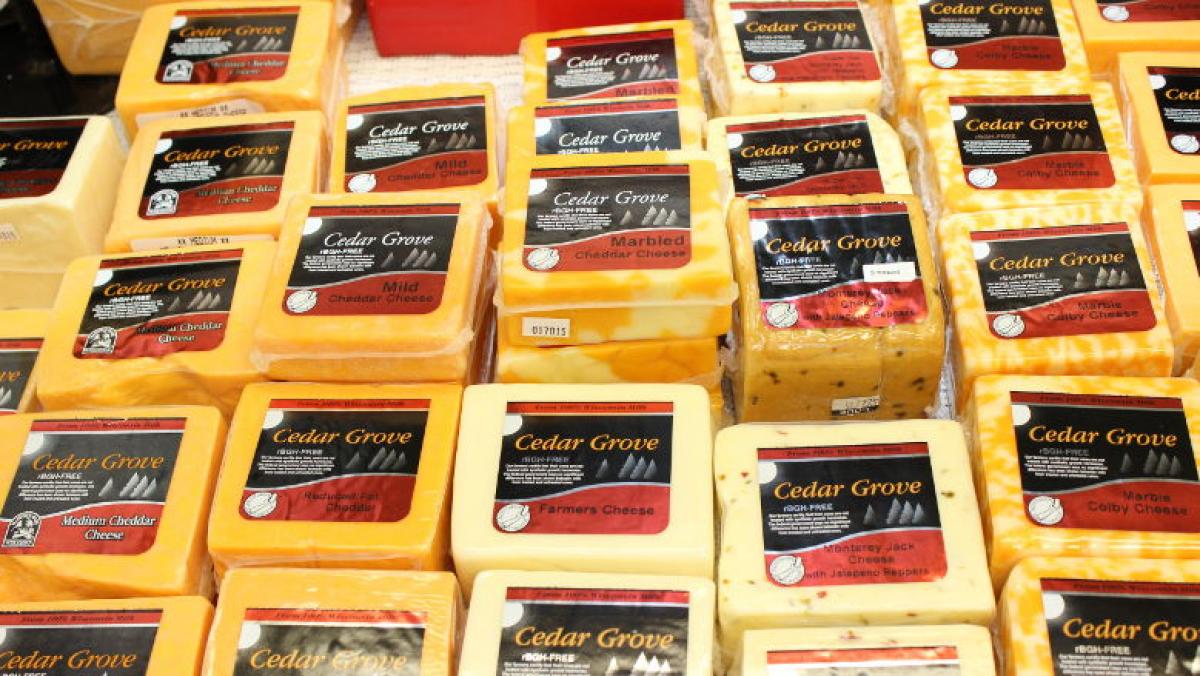 On the outskirts of Plain, Wisconsin, a small town of around 800 that lies less than an hour from Madison, stands a nondescript white brick building surrounded by farmland. From the outside, the Cedar Grove Cheese factory looks exactly like the numerous cheese plants found most everywhere throughout our fair state. A sign out front proclaims daily tours; tanker trucks deliver the latest batches of fresh milk; and of course, an American flag waves alongside a Wisconsin flag.

But there are aspects of Cedar Grove Cheese that make it stand out from the rest of the pack. The plant produces 12,000 pounds of cheese every day, and all of it is sourced from around forty family-owned local farms. Seventy percent of the cheese is produced with organic ingredients, and, as of 1993, Cedar Grove became the first cheese producer in the country to ensure that all of its products are rBGH-free (rBGH is a genetically engineered variant of the natural growth hormone produced by cows that some farms use to boost milk production.).

While their commitment to sustainable farming practices is notable, the factory has embraced sustainability itself through a revolutionary system called the Living Machine. An on-site greenhouse that uses plants to clean and purify wastewater, the Living Machine works to minimize the environmental footprint of the factory.

The person behind all of this innovation is Bob Wills, owner of Cedar Grove Cheese. A former teacher and researcher in the Department of Agriculture and Applied Economics at the University of Wisconsin–Madison, Wills is one of only fifty master cheesemakers in the state of Wisconsin. The Master Cheesemaker Program, the only one in the U.S., is an advanced education program at the Wisconsin Center for Dairy Research. Established by the Wisconsin Center for Dairy Research, UW Extension, and the Wisconsin Milk Marketing Board, the program enhances the international visibility of what is already the nation’s premier cheesemaking state and shines a light on the unparalleled standards of Wisconsin cheesemaking. Though he became a master cheesemaker in 2010, Wills has been involved with Cedar Grove since 1989. He is quick to point out that the factory, the first of its kind in the western part of the state, has been making cheese since 1878.

Wills says, “I think I always knew that I needed to be an entrepreneur and own a business. And this was a good one. It was a nice business to get into.”

Cedar Grove has found success producing Wisconsin standards such as cheese curds and cheddars. Wills says that the factory has been known to churn out up to 26,000 pounds of cheese curds in one week.

But Cedar Grove truly shines when it comes to specialty cheeses. Wills and his team started working with individual producers to make specialties for them, which later turned into the company’s bread and butter.

Perhaps one of their best-known cheeses is Weird Sisters, an aged, surface-ripened cheese that’s a combination of water-buffalo milk and cow’s milk. A pure, white cheese with a fresh yet creamy flavor, Weird Sisters has won many awards.

Wills explains that the cheese is named after the witches from Shakespeare’s Macbeth, a nod to the factory’s proximity to American Players Theatre in Spring Green. Cedar Grove produces several other cheeses that are named after Shakespearean characters: Montague (a mild sheep-cow milk blend), Banquo (a Pyrenees-style sheep-milk cheese), and Fleance (a sheep-milk cheese similar to Spanish Manchego).

Although the factory can point to achievements like producing excellent organic cheeses and dreaming up new specialty batches, Cedar Grove also prides itself on being completely rBGH-free.

Cheese that is produced with milk that is rBGH-free is considered by many to be better for one’s health. But Wills says that the company’s decision to use rBGH-free milk was influenced by wanting to stay true to cheesemaking traditions and to satisfy their customers.

“When I was at the university, I worked on a study about the basics of rBGH,” says Wills. “We concluded that dairy farmers were basically being hurt [economically] by the introduction of stuff that increased the milk supply. Consumers didn’t want it, and our producers didn’t want to lose customers.”

Cedar Grove has worked with many of the same milk producers since Wills took over in 1989. When many other milking operations began implementing a regimen of injecting their cows with rBGH in the 1990s, Cedar Grove and its producers agreed that their milk would be free of such additives, honoring the history and purity of cheesemaking.

“For a while, we were working with a fairly large farm,” notes Wills. However, there were elements lacking in the large farm’s milk “such as the seasonal characteristics or antioxidants” found in milk from smaller or rotational grazing operations.

Too, if the farm closed or milk was somehow compromised, Wills says Cedar Grove would be at risk to lose 25% of their annual milk supply. “That would be hard on our customers—and on us.”

“It works for smaller plants to pair up with smaller farms because both of them become significant to each other,” says Wills, pointing to the forty family-owned farms from which Cedar Grove sources their milk. All in close proximity to the cheese factory (most no further than Sauk City, Reedsburg, or Richland Center), these farms generally have small herds of eighty or so cows.

Wills says that “there isn’t enough organic milk in this area for what we need,” so the farthest they travel for milk is to a cluster of organic farms in the Darlington area. Wills also likes to source locally because it helps keep transport vehicle emissions to a minimum, which reflects Cedar Grove’s commitment to environmental sustainability.

The cheesemaker/farmer compact that Cedar Grove has developed over the years is a model for sustainable production. But perhaps what makes Cedar Grove truly unique is its ingenious Living Machine, an in-factory system that cleans wastewater before it goes back into the ground. Implemented sixteen years ago, the Living Machine was in operation long before being environmentally-friendly was a selling point for products.

The Living Machine is essentially a greenhouse next to the cheese factory containing a series of ten 2,600-gallon tanks. Wastewater flows from tank to tank, each of which contains collections of wetland plants. The plants absorb and filter out wastewater nutrients, while bacterial colonies that live in the tanks remove soaps and caustic cleaners as well as any remaining whey, milk, and bits of cheese.

“We [have] to clean the trucks that come in, the tanks, the pipelines, the pasteurizer, the vats, and the floors and walls. Everything is washed down. And in the process of that, we use around 8,000 gallons of water a day,” Wills explains. Into the Living Machine goes the “really dirty water that has whey, milk from the cheesemaking process, and cleaning chemicals, [stuff] we can’t just put that into nature without killing off the fish or whatever is out there.”

At the end of the three-day process, water processed by the Living Machine is clean enough to release into nearby Honey Creek, keeping the watershed clean and mitigating the impact of their manufacturing process.

“The goal is to have the water stay here,” says Wills, “but the main thing is to not put stuff out there that will damage the environment.”

The Living Machine is one of the only systems of its kind in the United States. Wills knows of a similar system at a cheese factory in Québec, Canada, and there is one in the Everglades. Wills says that the Missouri Department of Transportation even came to Cedar Grove to study the Living Machine, so they could build one at their headquarters in Jefferson City.

Since Cedar Grove is unique in its practices, many aspiring cheesemakers train or intern at Cedar Grove to learn their craft.

“We want to make the best-quality, safest product on the market. We want to support our farmer suppliers and our employees and the environment. And we want to be collaborative,” says Wills, noting how Cedar Grove helps others to develop their own cheese businesses. “We end up benefiting by growing along with them,” he says.

Many of these cheesemakers don’t have their own facility, so Cedar Grove shares the space with them. Certain producers, such as Chris Roelli of Shullsburg’s Roelli Cheese Haus and Andy Hatch of Dodgeville’s Uplands Cheese, use the facility and at times even train others.

“We give an equal opportunity to new artisan cheesemakers who need to get their hours in to become licensed. They’ll come in and do internships with us and get their training so they can start their own businesses,” says Wills.

Wills says that these interactions really help him to grow as a master cheesemaker.

“Every time I bring somebody new in here, and he or she is working on something that I can’t replicate, I’m going to learn a lot more about cheesemaking and be a better cheesemaker at the end of the process.”

Shelby Deering is a freelance writer who lives in Madison. She writes for several national magazines and regional publications, including Experience Wisconsin and BRAVA. Deering loves to explore new restaurants around Madison, and she has never met a cheese she doesn’t like.