Poetry in the Dark - Sky Park 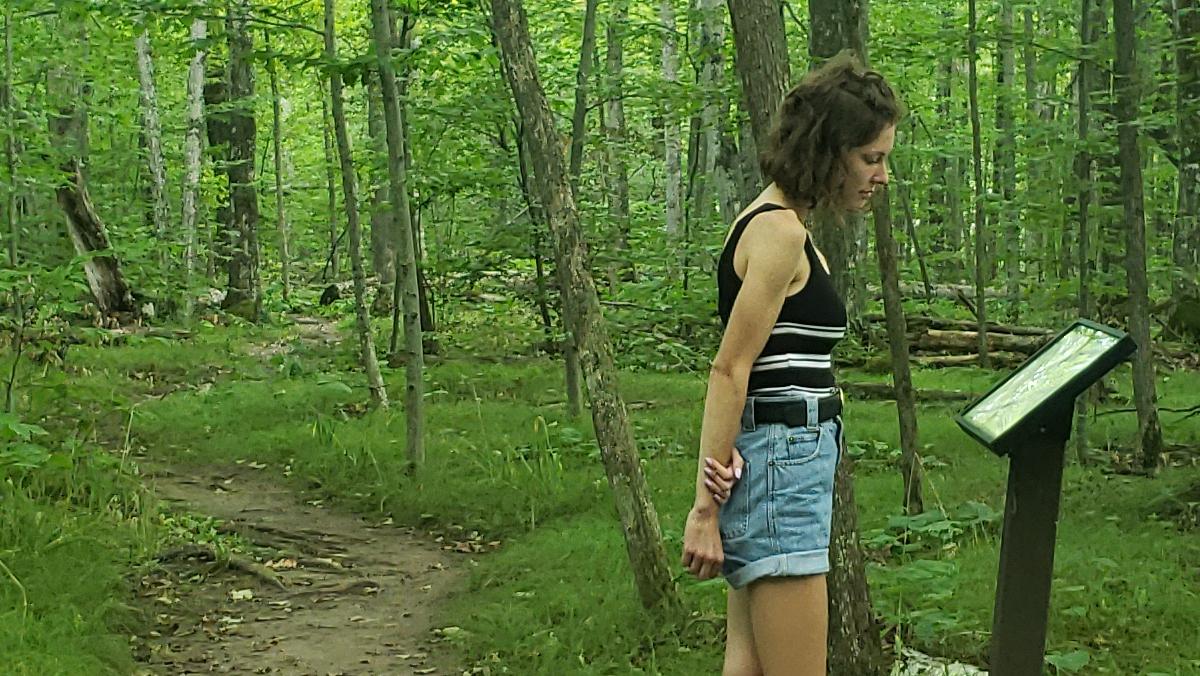 The Newport Poetry Trail in Newport State Park on the lakeside tip of the Door County peninsula is a ¾-mile walking trail that showcases the works of local writers and Wisconsin poets. All photos by Alex Paniagua

There’s a certain kind of serenity to be found at Newport Beach State Park, especially during the off-season in late autumn, when the stone path and forest floor have curled up together under a blanket of leaves. It’s a time of year when the warmth of the afternoon sun is balanced by the breeze coming off of Lake Michigan.

Being a state park, Newport is the kind of place where you might expect to see an occasional signpost bearing a trail map or bit of nature lore. But on this trail, the signpost is different. Behind the thin film of plexiglass is a short poem. Not too far ahead, more waist-high posts with poems appear, unexpected guides along a path that winds through dense forest and along yellow prairies. You have found the park’s Poetry Trail. 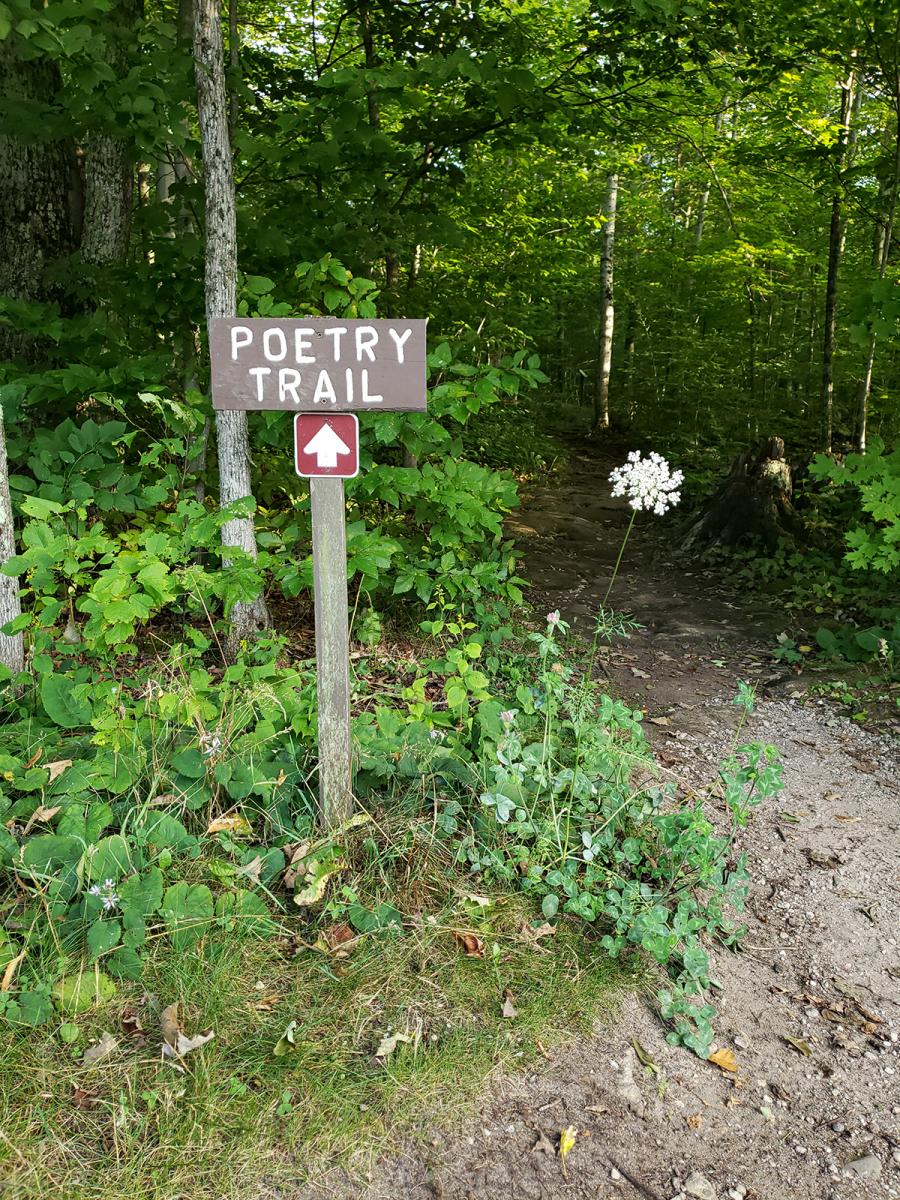 While the Newport Poetry Trail comprises only a small part of the 2,373-acre state park at the tip of the Door Peninsula near Ellison Bay, it inspires creative collaborations with musicians, nature lovers, and other members of the greater Door County community—all in the name of poetry. It’s a place that many visit regularly, and others happily find by chance.

The Poetry Trail came to be as the result of a few meaningful encounters and collaborations. In 2009, a retired neurosurgeon and poet named Phiroze “Phil” Hansotia made a visit with his wife, Marilyn, to the Robert Frost Interpretive Trail in Vermont. Inspired by what he saw on the Frost Trail, Hansotia decided to create his own. You can still find his first modest poetry trail nestled in the woods of the campus arboretum of the University of Wisconsin–Stevens Point at Marshfield, not far from Marshfield Clinic, where Hansotia worked as a neurologist from 1970 to 1996 after emigrating from India.

After his retirement, Hansotia and his wife moved to Ellison Bay in Door County, where he immediately began to look for opportunities to create another poetry trail. A chance meeting between Nancy Rafal, Hansotia’s friend and former treasurer of the Wisconsin Fellowship of Poets, and Newport Wilderness Society president Jack Travis provided one. One day, Travis mentioned to Rafal that several members of Door County’s Newport Wilderness Society wanted to incorporate poetry somewhere in Newport State Park and were trying to figure out the best way to do so.

“It all felt too perfect,” Rafal recalls. “I went to Phil, told him about their idea, and he was very happy to work on a poetry trail in Newport.” 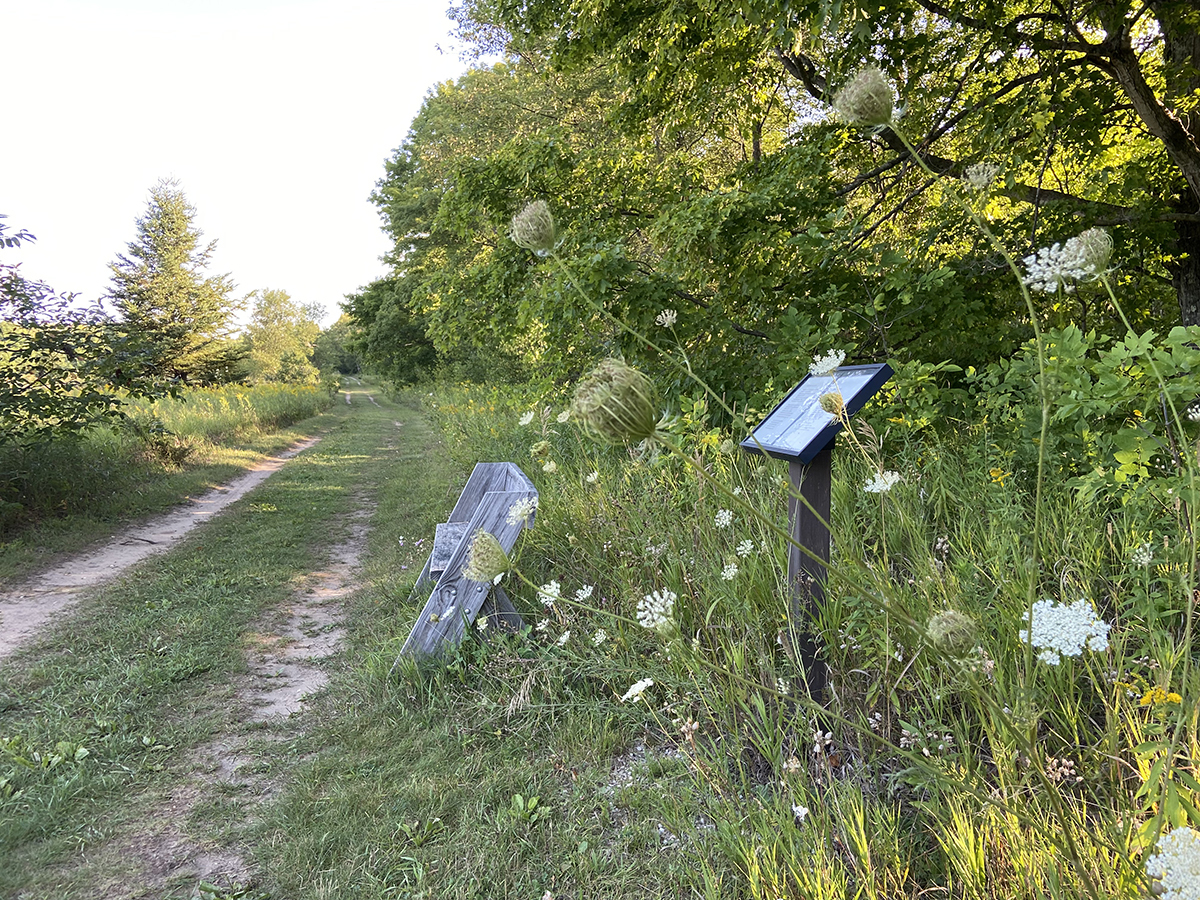 Hansotia and Rafal, along with former Door County poet laureate Sharon Auberle and Newport State Park manager Michelle Hefty, came up with a plan to install stanchion posts along a 3/4-mile-long path of meadow and wooded bedrock. Each stanchion would display a poem from a revolving collection featuring Wisconsin’s many creative voices, from state and local poets laureate to Door County residents and students. About six years after establishing the trail in 2010, Rafal brought in another partner, the nonprofit literary center Write On, Door County, to help expand community participation. Today, Write On helps to curate the trail, replacing the poems on a quarterly basis.

These poems at any given time reflect a deep collaboration between the trail partners and Door County theaters, community groups, musicians, and schoolchildren, as well as a wide variety of aspiring and accomplished writers. The trail has featured poems by elementary and middle school students working with Fish Creek’s Northern Sky Theater, poems inspired by the 2020 Door County Celebrate Water Initiative, and the works of local poets laureate like Auberle and Rafal, as well as statewide poets laureate such as Karla Huston and Margaret Rozga. 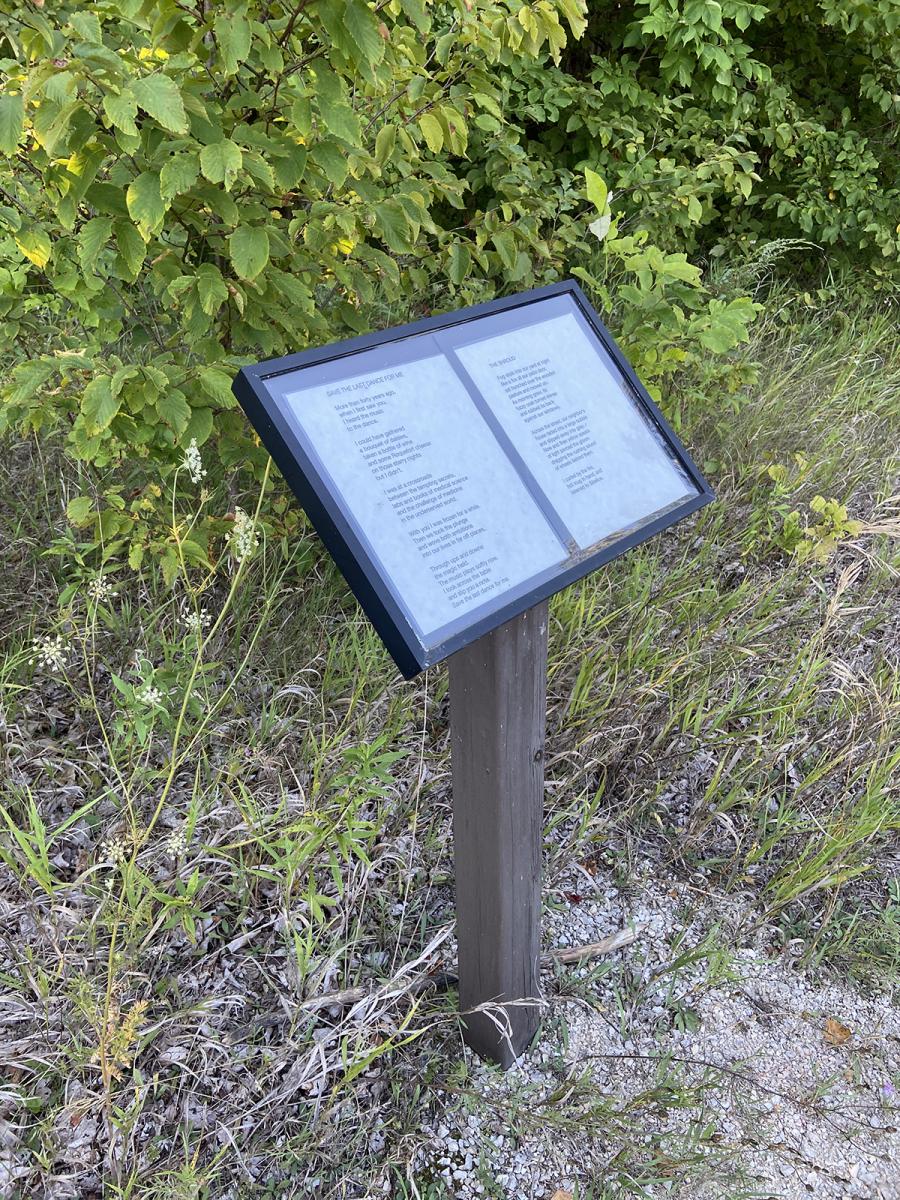 Although the majority of people visit the poetry trail during the prime tourist months of summer and early fall, others tend to enjoy the park in the winter. Jerod Santek, artistic director of Write On, Door County, believes that working with a wide range of groups during the entire year provides returning visitors with a very different experience from their last—and allows new visitors to encounter poetry in a totally different way.

“People who don’t normally have poetry in their lives might come across this trail by accident,” Santek says. “But they stop for a bit and realize that poetry isn’t this intimidating thing they were taught in high school—it’s an accessible art form that everyone can enjoy.”

One of the groups Santek regularly collaborates with is Midsummer’s Music, a performing arts group in Sister Bay that has been bringing chamber music to Door County audiences for more than three decades. Before each season, Midsummer’s Music provides Santek and the Write On, Door County team with recordings of the music they will be playing. The Write On team then shares the recordings with various poets, who in turn create a poem in response to the music.

“Each poet has shown us just how unique, creative, and intellectual they are with this process,” said Allyson Fleck, executive director, assistant artistic director, and violist for Midsummer’s Music. “Some poems are very long, others are just a short verse. It truly comes down to what the poet extracts from the music.”

The poets who write for this collaboration are invited to read their finished poems prior to the performance of the composition that inspired them. Afterwards, these poems are printed and displayed on the Poetry Trail. 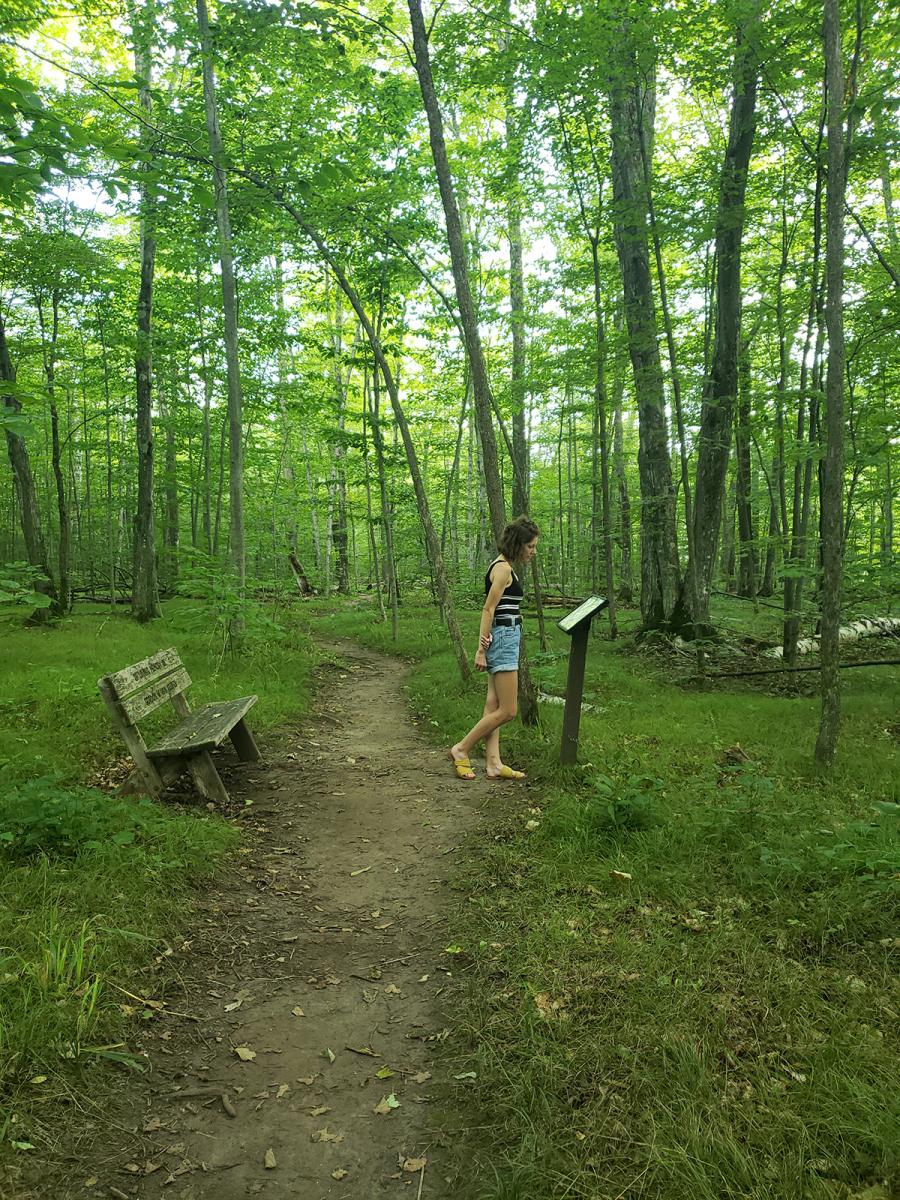 Another collaborative event developed by Bailey’s Harbor poet Francha Barnard, called Write When the Moon is Full / Read When the Moon Is New, brings people together in the park to draw inspiration for their poems from the full moon’s rise over the lake. Participants then submit their work to be placed along the trail in preparation for an afternoon reading of their poems just before the following new moon.

Barnard, a retired elementary school librarian from Sheboygan who moved to Door County in 2006, says that two books of poetry she enjoyed reading to children became the inspiration for the event: Owl Moon, by Jane Yolen, and When the Moon is Full: A Lunar Year, by Mary Azarian.

Barnard says that she really began to notice a growing interest in poetry throughout Door County around the time Write When the Moon is Full had its first event in 2018. According to Barnard, the event drew a sizable crowd because it did such a good job of highlighting the many writing styles of the community and the influence that nature has on creativity.

“There were people who came who had never written poetry before,” says Barnard. “They just heard it was happening and wanted to give it a try.”

Although the trail frequently showcases multiple poets at any given time, occasionally trail organizers feature the works of a single poet. This was the case for the poems of Phil Hansotia, which were displayed May through July 2021 as a celebration of his life, writing, and many contributions to the Door County community. Hansotia passed away in June 2020. A reading of his poetry was held at the head of the Poetry Trail on July 1, 2021. Hansotia’s widow Marilyn selected the opening poem, “Looking for America,” and read the piece to those in attendance, the last resounding verses lingering in the heat of the day:

America has always been a work in progress—

an imperfect entity busy correcting itself.

Taken as a whole it does quite well.

That’s why we’re all here.

While the majority of the past year’s poetry events have been put on pause due to the COVID–19 pandemic, the Poetry Trail is seeing more and more visitors. According to the Wisconsin Department of Natural Resources, between 2019 and 2020 Wisconsin State Parks in general have seen a 22% increase in visitors. As this number continues to rise, there’s a good chance that more people will experience the unique combination of poetry, community, and nature that the Newport Poetry Trail has to offer.

Alex Paniagua is a Milwaukee-based freelance writer and creative editor focused on travel and profile stories. His articles on notable people and places have been featured in Wisconsin Banker, AQUA Magazine, and American Farriers Journal.