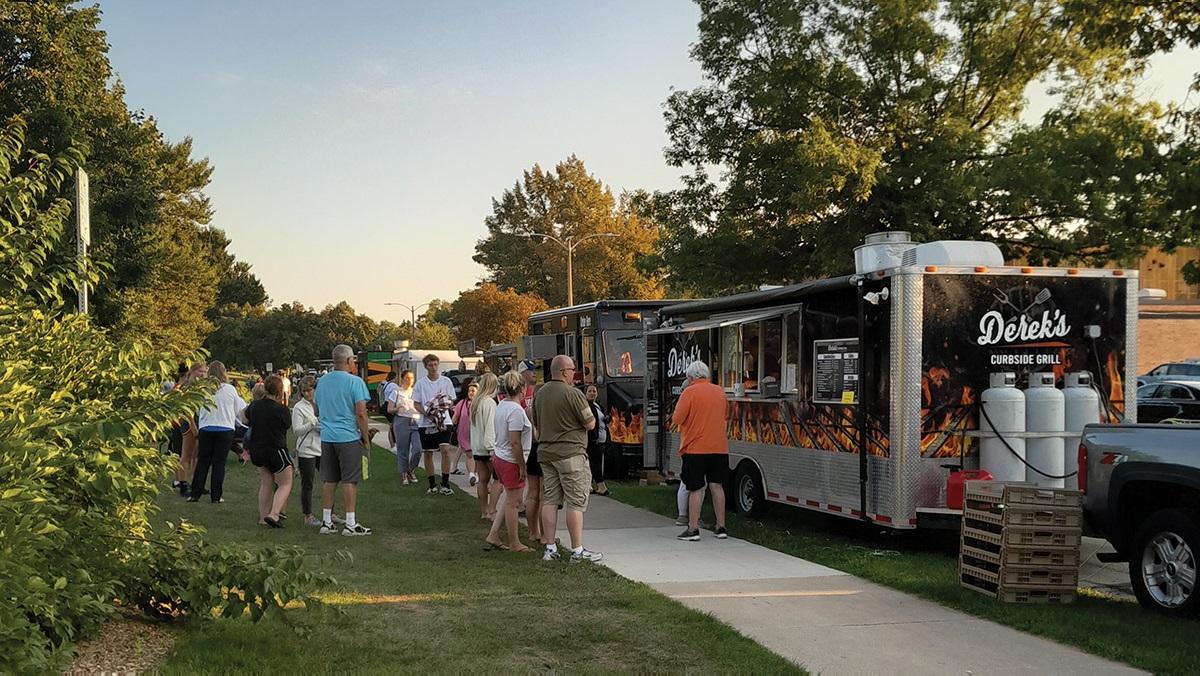 Once a week, from late spring to early fall, Vollrath Park on the northeast side of Sheboygan transforms from a serene lakeside park to a bustling mall of hungry people and colorful food trucks. From specialty sandwiches, burgers, and pizza to Mexican, Thai, and Chinese dishes, and an array of dessert choices, you’ll be hard pressed to find better takeout options elsewhere on a Monday night.

The weekly event runs from 4 to 8 pm and attracts up to a thousand people, so my girlfriend Reyna and I and our kids made sure to arrive early. We parked and walked in as food truck operators made their final preparations. Other early birds were pacing the sidewalk and reading over menus. Reyna already knew what she wanted—steak tacos—but we walked past all the trucks for good measure. There were over a dozen to choose from. 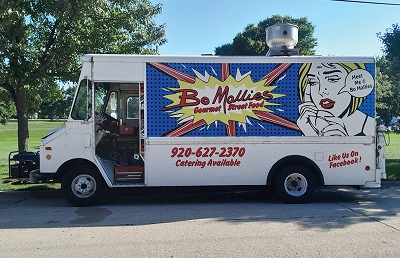 People were already forming lines outside the food trucks. Along the roadside, the hum of generators blended with chatter from the excited crowd. In years past, there were only enough trucks to fill the main road. This year there were half a dozen more trucks parked on the intersection leading towards the bluff.

In between chance encounters with friends and family, I tried to catch some of the food truck operators in a lull to learn more about this event and what they were serving. The business at some of the trucks never slowed down long enough for me to talk with the proprietors, but there were plenty of people who were happy to recommend their favorite dishes.

The first vendor we visited was Gyros 2 Go, an authentic Greek cuisine food truck owned by a local Sheboygan family. I spoke with Adam, who was managing the food truck while Greg, the owner, attended to their brick-and-mortar restaurant, The Greece-E-Spoon. Gyros (pronounced Yee-ro, from the Greek word “to turn”) are made from meat that’s sliced, stacked on a spit, seasoned, and cooked on a vertical rotisserie that turns slowly in front of a broiler. The cooked and seasoned meat is sliced thinly and served on pita bread with tomatoes, onions, and a cucumber sauce. While lamb meat is traditionally used, beef and chicken options are available with a variety of toppings. I asked Adam his favorite item on the menu, and he quickly responded, “the deluxe gyro for sure, either lamb or chicken.” The deluxe comes with all of the toppings plus feta cheese and hot peppers.

People congregated around the park, some groups sitting on benches to visit while others stayed just long enough to finish their food. While some families brought blankets and foldable chairs, others simply sat on the grass. Friends caught glimpses of one another walking through the crowd, leading to new groups forming and long conversations through the evening. When an acquaintance and I recognized each other from the local archery range, Reyna asked him and his wife what they were planning to eat, and a conversation began. Strangers can become new friends here, such is the power of good food and a welcoming environment. 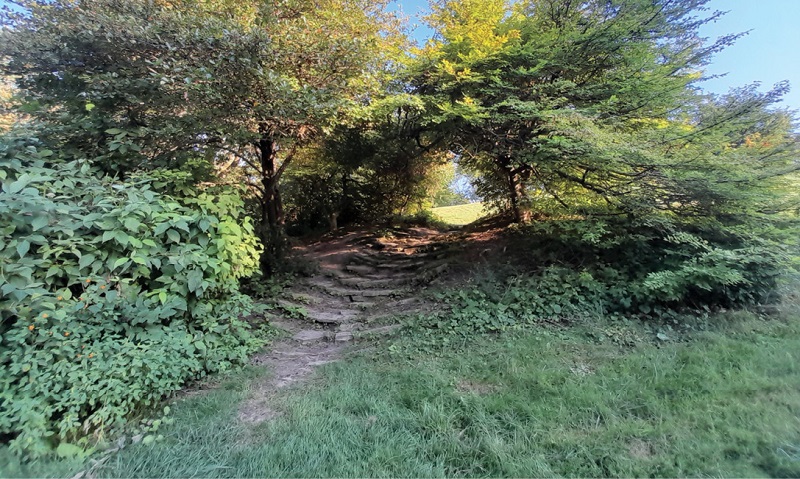 The kids insisted they weren’t hungry and wanted to go to the park’s playground. I decided to return to the truck and grab our folding chairs. On the way I saw Jim, a good friend’s brother, heading home with a hefty burrito from José’s Food Truck. Turns out Jim lives a few blocks from the park and visits nearly every other week to grab a meal.

As I headed towards my truck, my friend Ray appeared, heading in the same direction. I asked if he had decided on a food truck. He thought he might go for gyros, but he was not sure yet. Then, in the sea of scooters, bicycles, and wagons, I bumped into my cousin Christopher pushing his godchild in a stroller. Our conversation was brief but another unexpected treat, thanks to Food Truck Monday at the park.

From specialty sandwiches, burgers, and pizza to Mexican, Thai, and Chinese dishes, and an array of dessert choices, you’ll be hard pressed to find better takeout options elsewhere on a Monday night.

I looked over the bustling scene before heading back in. A steady stream of cars passed by on their way towards the lake. Every half hour the city bus made its route through the neighborhood. Motorcycles of all sorts crept by to allow pedestrians safe travel before roaring on. Any other day of the week this park would be quiet.

One food truck that caught my attention was Jamaica Mi Krazy, owned and operated by a young man named Rushane. His tow-behind trailer was modified with sliding windows, a functioning kitchen, and decorated with painted palm trees. Getting an audience with Rushane meant getting in line like everyone else. Originally from Jamaica and now living in Green Bay, he told me, he’s always dreamed of being his own boss. These days, Rushane makes a living using his entrepreneurial spirit and a passion for cooking, feeding people across northeast Wisconsin.

This was the perfect time for me to learn more about jerk chicken, the signature Jamaican dish. Although he didn’t share his recipe, Rashane described the process. The chicken is marinated overnight with a spicy wet rub, then grilled the next day and served with a side of rice and a homemade coleslaw that includes pineapple and cashews. This complex mix of flavors makes it his bestselling dish. The jerk chicken is authentic, Rashane told me, “It’s what we’re known for.” 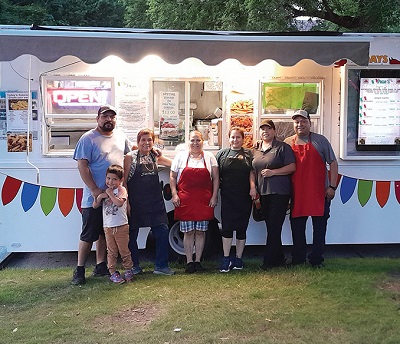 It took some convincing, but the kids finally agreed to leave the playground. From the diverse range of foods, they opted for quesadillas and French fries. Lucky for us, José’s Food Truck had us covered. A community staple, and one of the original five food trucks since this weekly event began back in 2013, José’s is an authentic Mexican food truck run by a multigenerational family originally from California. I spoke with José himself, who told me how the business has evolved over the years. His father started a restaurant and food truck combo in California long ago, which became a Mexican grocery store when the family moved to Sheboygan around 2003. A few years later, they returned to their roots in the food industry and haven’t looked back. With a new location in town and a second truck focused on seafood in the works, the family works year round to meet demand. I asked José if he preferred working in a restaurant or the truck. “Working in the truck is better than a restaurant,” he said. “Here, I can step outside whenever I want.” Knowing they operate the truck year round, I asked if that meant winter, too. José looked up and just laughed.

One of the food trucks parked along the intersection was Authentic Thai Cuisine On Wheels, serving Thai street food out of a repurposed ambulance with functioning red lights. A woman named Saji was working inside, along with her mother and young son. Short in stature, open, and full of energy, she reminded me of my own mother. Saji told me about her move from South Carolina to Sheboygan, and how the idea of running a food truck arose after she received compliments on her cooking at a neighborhood block party. It took a few years and a major financial investment, but the end result is not only authentic but delicious. A woman in line said she had come all the way from Howards Grove, northwest of town for the Thai food. 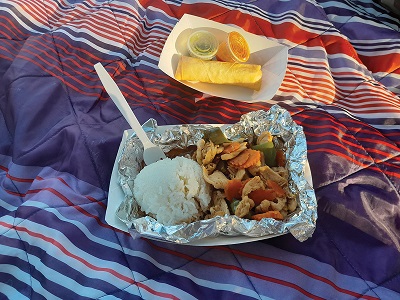 I ordered cashew chicken and a spring roll and waited with the other customers. The aroma that wafted from the truck made me smile in anticipation. Thinly sliced chicken, artistically cut carrots, cashews, yellow and green bell peppers in a red sauce with plain white rice to the side all came together perfectly. I took my first bite. It was difficult to believe how tender everything was, especially the carrots. The chili flakes had me expecting more heat, but the mix of slightly sweet and fully savory flavors were more than enough to support the chilis. The vegetable spring rolls had an enjoyable simplicity that paired well with some hot salsa from Jose’s. Even Reyna, a notoriously picky eater, complemented Saji on the food.

As daylight began to fade, some of the food trucks turned on their outdoor lighting. Last minute customers took this as a call to action, returning to place their final orders. Even with some Cookie Cart cookies for the ride home, it was tough to leave. I felt like a kid forced to leave a party early. 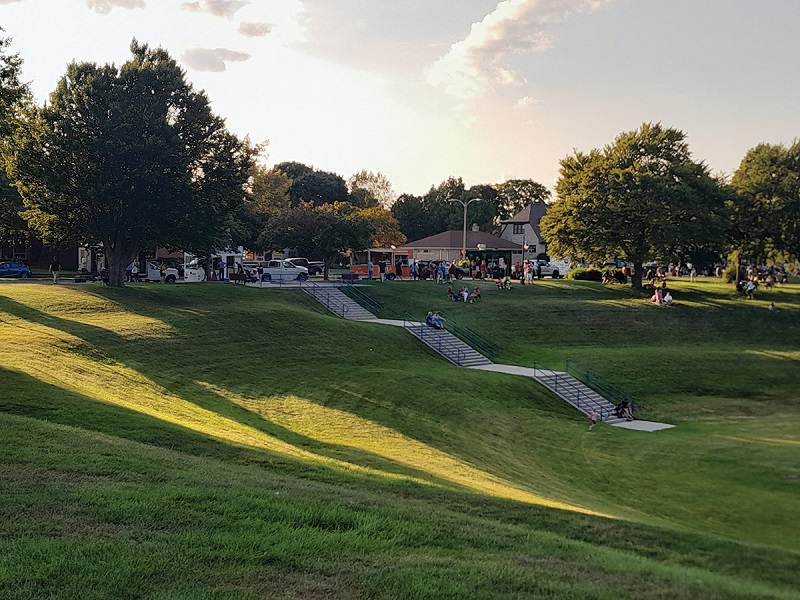 Vollrath park is open year-round and usually frequented by joggers, dog walkers, and groups of kids out having fun. Growing up in Sheboygan, I also equate the park with graduation ceremonies, winter sledding, public movie events, and disk golf. And always, glistening beyond the trees, the great lake can be seen any day of the week. On Mondays though, weather permitting, this park transforms into a dynamic scene where people from all over the city and the region congregate for good local food and good company.

All images by Leo Aguilar

Leo Aguilar is a graduate of Lakeshore Technical College and a student at UW–Green Bay. When he isn’t creating art, he’s daydreaming about horticulture, reptiles, or edible insects. He lives in Sheboygan and enjoys visiting Lake Michigan with his family. His work has also appeared in On Wisconsin Outdoors.