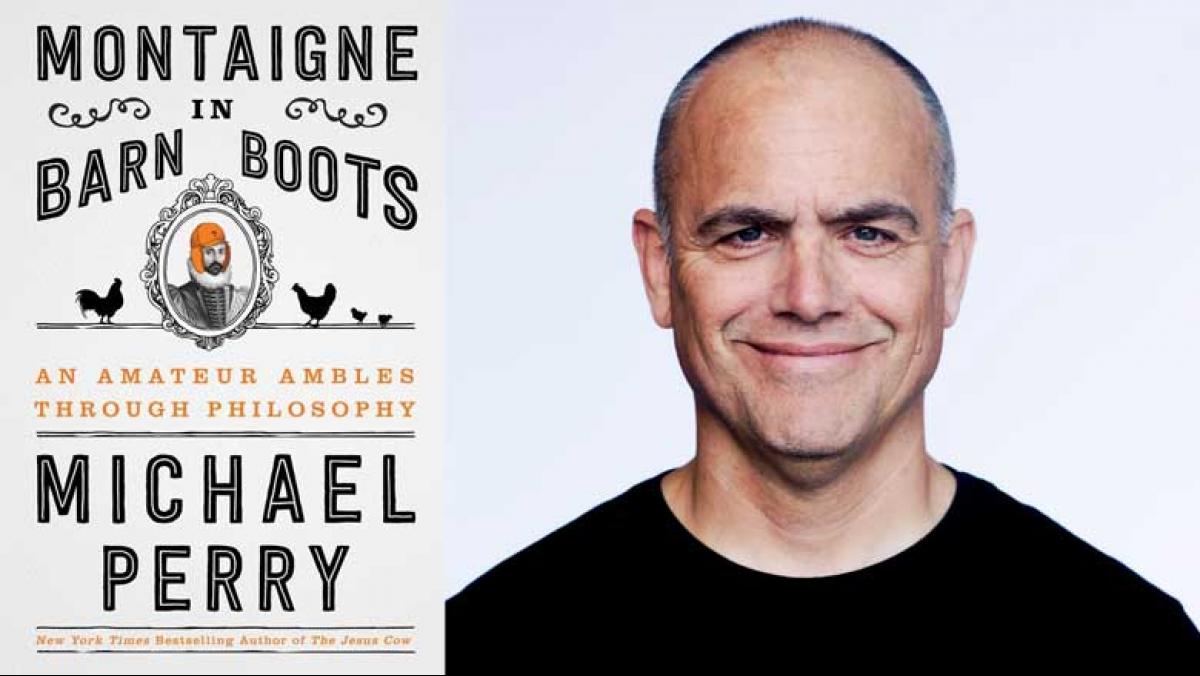 Michael Perry, a pig farmer and bestselling author of books about life in rural Wisconsin, decided to immerse himself in the essays of sixteenth-century politician-turned-philosopher Michel de Montaigne while recuperating from kidney stones. In Montaigne in Barn Boots: An Amateur Ambles Through Philosophy, we learn how Perry discovers that Montaigne suffered from kidney stones, too, and wrote about them along with memory, health, aesthetics, sex, marriage, cannibalism, and faith, among a host of other topics in his influential and voluminous Essais.

An “essay” in French means an attempt. The point of writing is “to look narrowly into one’s own bosom” says Montaigne, to put ideas to practice. Perry writes that, like the electric fencer he once grabbed, Montaigne’s essays “jolt[ed] me out of my absentminded musing and into the recognition that through the examination of my imperfections I can better serve my obligations to others.”

Where Montaigne wrote from a castle tower in an attempt to describe in utter frankness the traits of man, Perry writes from a room above the garage on his farm to pay the mortgage. Perry points out that while the two might be separated by centuries, socioeconomic status, and intellect (Perry notes that while Montaigne could read at age two, he placed only second in his sixth grade spelling bee), they are both writers pecking away—like chickens—at life through words.

Each of the ten chapters in Montaigne in Barn Boots, Perry’s version of the Essais, includes an introduction in which Perry draws poignant and humorous parallels between his own experiences and those of Montaigne. Topics range from the weighty (sex, race, death) to the quotidian (aromatherapy, non-spill fuel nozzles, Prince albums). For instance, Perry reflects on the dissonance between the Shakespeare play he'd attended with his daughters the day after taking them to see a demolition derby. Perry’s hunting buddies chide him for bringing tea into the deer stand. “Right on,” he retorts.

It turns out that deep thinkers—Montaigne and Perry both—can get the blues. Sometimes it’s tied to illness, sometimes to writer’s block, and sometimes it just happens. But, for writers, no material goes to waste. Perry notes: I “leverage that vulnerability to deepen the vigor of my life by—here I paraphrase Montaigne—countering its brevity by appreciating its weight.”

Sometimes Perry laments the palpable chasm between his life as a farmer and a that of a popular writer. In a chapter titled “Roughneck Intersectionality,” Perry admits to growing concern about the distance between rural and urban America. Montaigne helps Perry see how opposites can inform one another and create a greater understanding of the breadth of human experience.

What Montaigne does for Perry, Perry attempts to do for readers of Montaigne in Barn Boots by providing us with room for self-reflection. “I’m less interested in confirmation or repudiation than I am in exploration,” he notes. Perry asks us to go deep, dedicating the book to “those willing to approach conversation with something less than a steamroller.” We readers can aspire to be those to whom the book is dedicated, to read not as passive observers but as thoughtful citizens who understand our duty to each other in an increasingly divisive world.