Booyah: A Noun, A Verb, An Exclamation! | wisconsinacademy.org
Skip to main content

Booyah: A Noun, A Verb, An Exclamation! 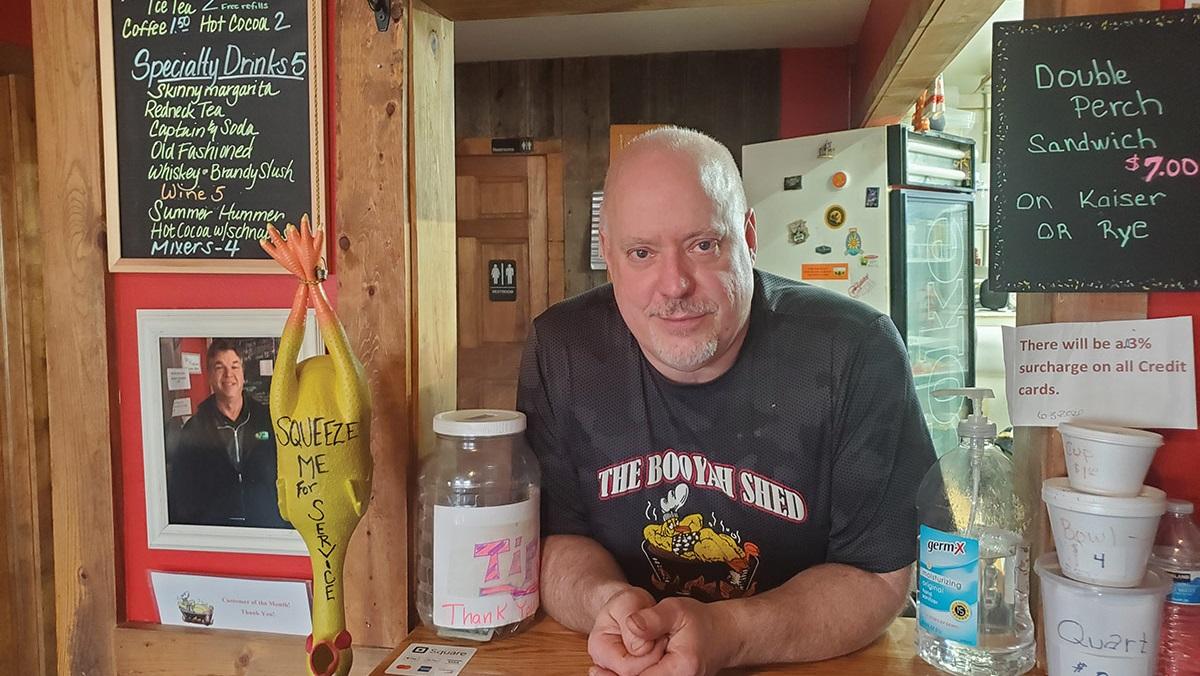 Dan Nitka, owner of The Booyah Shed in Green Bay.

It’s a noun, a verb, an exclamation, and a hot bowl of everything but the kitchen sink. Booyah, a regional soup, holds a firm grip over the people of Green Bay and northeast Wisconsin at large. Residents take pride in preparing large batches of booyah (the soup) for a booyah (a gathering), whether at a park, church basement, or parking lot, so all can enjoy this hearty dish.

Booyah has a mysterious and disputed history. A 2015 article in the Green Bay Press-Gazette attempted to chronicle its origins with interviews of local residents, some who claimed that their great-grandfather invented the dish, and one who took credit for the soup’s odd name.

The engaged, and often heated, discussions that ensue when locals talk about the dish is a sign of a healthy and active food culture according to Terese Allen, author of numerous Wisconsin cookbooks, and co-author of the comprehensive Flavor of Wisconsin: An Informal History of Food and Eating in the Badger State. She has written about Wisconsin’s food and culinary history for decades and is the co-founder of Culinary History Enthusiasts of Wisconsin (CHEW).

“You go to a booyah to eat booyah,” says Allen. “That’s saying something about the importance or the connection people have to it because it becomes larger than the dish itself. It's the event as well.”

At its most basic, booyah is a soup created in large batches to serve large groups of people. The dish often features fresh vegetables, like carrots, green beans, peas, potatoes, and celery, and one main protein, with chicken the most common in the Green Bay area. There are conflicting opinions over whether booyah should include cabbage, rice, additional meats, or tomatoes.

“There is no one recipe,” says Allen. “It's much like chili in that people have strong opinions and strong feelings about the right way to do it.” Allen says booyah is specific to the lower-Door County, Green Bay, Brown County, and Outagamie County region, and not everyone in the state knows about it. Traveling around Wisconsin to give presentations, she has noted that people in the lower, central, and western parts of the state seem perplexed when she mentions booyah. She believes the Belgian-American heritage in the eastern region of the state is at least partly responsible for the booyah tradition there.

Immigrants from Belgium flocked into Wisconsin in the second half of the 19th century. A report by the Ministère de la Région Wallonne in Brussels, Belgium, on file at the UW–Green Bay library, documents the immigration from 1854 to 1855 of more than 15,000 Belgians to the lower-Door County region, including Door, Kewaunee and Brown Counties.

In her research, Allen has never come across a dish from Belgium called booyah, but she says it’s that likely Belgian immigrants used inexpensive, in-season ingredients to cook up something like it for large group gatherings.

According to the Belgian Heritage Center in Brussels, Wisconsin, Belgian-American communities celebrate an annual harvest tradition called Kermiss or Kermis, with games, singing, outdoor activities, and booyah in a three-day festival. The festival was also a way for the 19th-century immigrants to raise money for their rural schools, churches, and communities, a practice still seen today in local fundraisers around the region each fall. 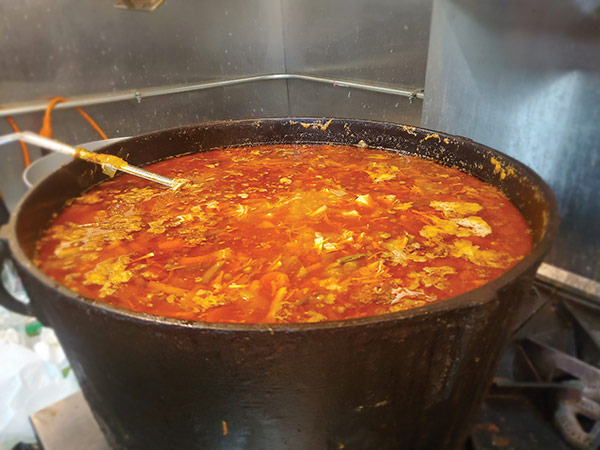 Chicken booyah particularly can be found in a variety of places across Green Bay, from Menard’s parking lots to Lutheran church basements, and it has found its way into the contemporary culture of the region. The local collegiate summer baseball team, the Green Bay Rockers, was known as the Green Bay Booyah from 2019 to 2021. During those years, the ballpark served chicken booyah during games from a 2,000 gallon booyah kettle claimed to be the world’s largest. The team’s mascot was Rocky Bal-Booyah, a larger-than-life cartoon chicken.

While the dish may not exist in other parts of the state, Allen says it shows up in similar forms in communities like St. Paul, Minnesota, where chicken booyah is served at church suppers. Communities along Lake Michigan’s northern shore have fish booyahs that are similar to chicken booyah in structure and communal importance. Their booyah is akin to Door County fish boils and similar dishes served at community events in other parts of the country, such as jambalaya and crawfish boils in Louisiana.

Allen, who now lives in Madison, grew up in Green Bay and has a strong, familial connection to the dish. Her father, a man with Belgian roots and customs, grew up eating fish and turtle booyahs, and she did as well until chicken booyah became the dominant version in the Northeast region. She shared the story of how her father ate the dish on the last day of his life.

“Booyah was Dad’s favorite food…it was a Belgian food (and) that was a meaningful thing for him,” says Allen. “That he got to eat it on his last day has become part of the folklore of our family.”

For almost four years, Nitka has owned and operated the Booyah Shed on Highway 32, about a mile from Lambeau Field. The modest restaurant is easily missed. Nitka says the building and the name were inspired by the tin-roofed sheds often found in backyards where families and congregations cook their booyah.For Dan Nitka, booyah and family have been interwoven for the last two decades. Nitka and his brother Robert began tinkering with a family booyah recipe that originated with their uncle. The brothers began making their booyah to sell at the Green Bay farmers’ market and to serve at church picnics and community events.

The roughly 1,000-square-foot building has a simple, no-frills feel, but Nitka’s approach to booyah is anything but. He wouldn’t divulge much about their decades-old recipe for booyah, but he says it takes a lot of time.

“We do a few other steps in the process to extract as much flavor from the chicken as possible,” says Nitka. “I’ll say that much.” 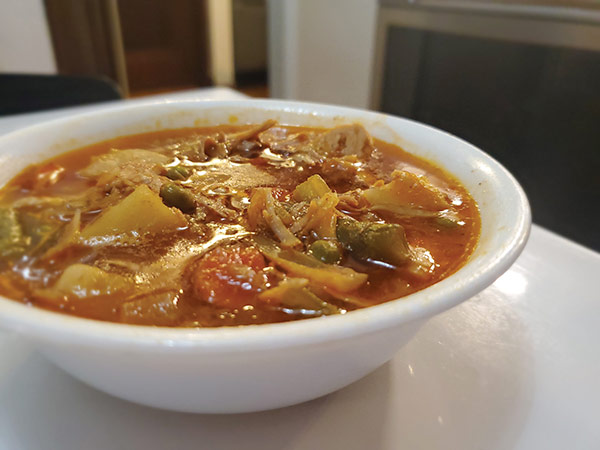 Rather than using pre-cut chicken thighs or chicken bouillon, Nitka will cook down 30 pounds of whole chicken low and slow overnight. He divulged that he does include beef bones in the broth and as a result, bone marrow shines in the flavor. He says after refining the recipe for over 20 years, he has come to the point where he considers it perfect.

‘Right now there’s nothing more I would tweak on the recipe,” says Nitka. “We’ve got it dialed in now.”

In addition to whole chickens, Nitka includes fresh vegetables like cabbage and carrots. And the Booyah Shed shows its Green Bay Packers pride with the addition of green and wax (gold) beans.

“People want to booyah for their tailgate parties or parties for the game,” says Nitka. “So once the Packers lost (this year) we kind of did see a little down drop.”

In the summer and fall, the Booyah Shed caters to family gatherings, anniversaries, and Packers parties. In the winter and spring months, customers pile inside to warm up and eat or to pick up quarts of booyah to take home to share with loved ones.

In 2021, Nitka sold roughly 3,000 galloons of booyah in addition to brats, burgers, tacos, cheese curds, and chicken sandwiches. The booyah is made in a 45-gallon, cast-iron kettle, something Nitka says is crucial to the success of the booyah. They go through about five batches a week. In the summer, the Booyah Shed fires up an old-fashioned 90-gallon kettle outdoors for larger booyahs.

Regardless of the time of year or size of the kettle, Nitka keeps the focus on the customers. The Booyah Shed’s walls are lined with family photos, candid shots of diners, newspaper and magazine clippings of the Booyah Shed’s history, and memorials for people, such as Dan’s brother Bob, who have passed on.

Nitka isn’t a booyah snob. The dish, and his restaurant, are all about the people who make and eat the hearty offering. “Everybody makes it different,” he says. “There’s no right or wrong way.” Like Allen, he’s seen various renditions across the region and in other parts of the country, such as a turkey booya (without the “h”) in northwest Minnesota. No matter how or where you make it, booyah is a year-round dish that brings people together.

All photos by John McCracken.