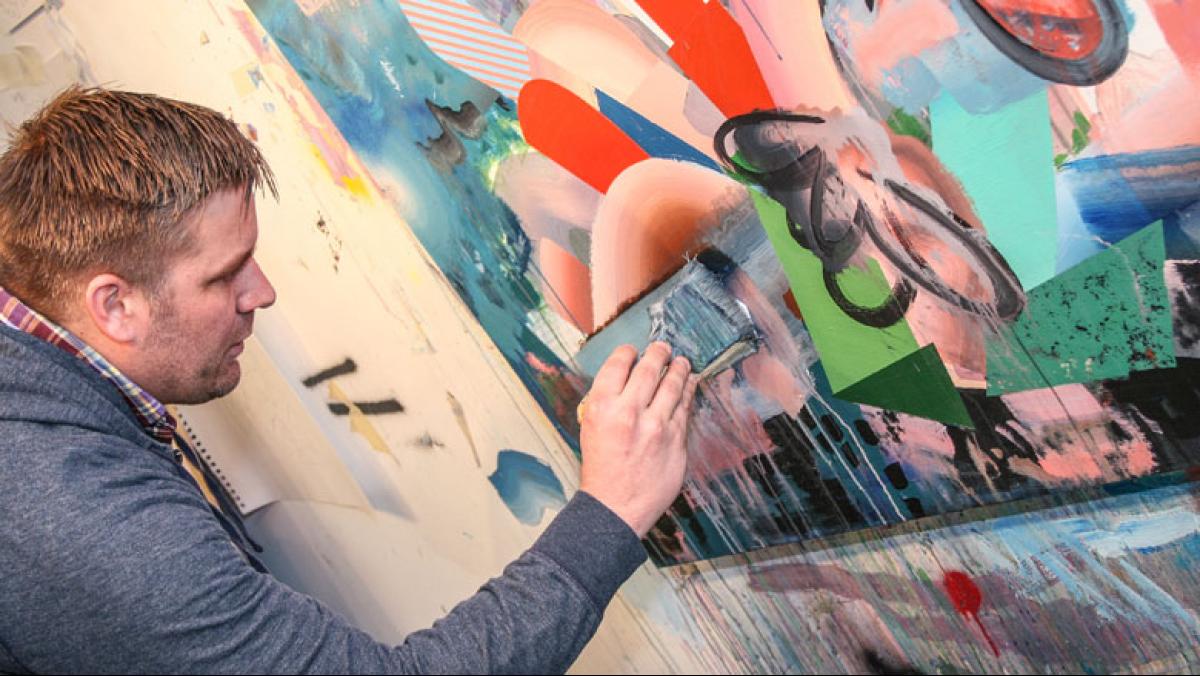 I met Tom Berenz back in 2008 when we were teaching together at Ripon College. Both Wisconsin-based painters with backgrounds in traditional methods, we often met to discuss our views on painting and art. Since then we have exhibited together and from time to time encounter each other’s work in shows around the state.

I recently had a conversation with Berenz in anticipation of his upcoming exhibition at the James Watrous Gallery in March of 2016. Reflections on his work and life reveal Berenz to be a Midwestern pragmatist who strives for authenticity in his paintings. His workmanlike approach to his craft reveals a penchant for honesty as he succeeds and struggles in the artistic process.

Art is often seen to connect with—or to be consciously divorced from—an artist’s biography. The contemporary work of Tom Berenz seems to fall somewhere in between.

For two generations, Berenz’s close-knit family owned an auto body shop in the Fox Cities. Encouraged by his parents to pursue an early interest in drawing, Berenz brought his creative sensibility to the nearby University of Wisconsin–Oshkosh where he began studying Art Education.

An internship decorating the interiors of McDonald’s restaurants turned out to be an influential introduction to form and color, contributing to his ability to see painting as a practical pursuit as much as a magical process of inspiration. As his study of art intensified, professors and mentors such as Li Hu and Jeff Lipschutz instilled in Berenz a desire to take on painting as a rigorous pursuit.

Berenz entered the MFA program at the University of Wisconsin–Madison after receiving an MA in painting from Northern Illinois University. Interestingly, he was also accepted into the Masters program at Hunter College in Manhattan, one of the most prestigious art schools in the country. Never bohemian by nature, Berenz felt removed from the lifestyle of this elite art school. A family kid from Fond du Lac with roots deeply bound to Wisconsin soil, he decided to maintain his practice here.

During this time, Berenz began painting events of disaster and calamity, realist depictions taken straight from the AP wire: floods, fires, and homes broken into piles of wreckage. Though not mature works, they began to mark a territory of the psychological in future paintings. Detailed compositions of chaos, his disaster paintings seem to be a reflection of inner thought rather than simple renderings of a dedicated subject.

Berenz also began to move beyond realism into an honest interpretation of his experience. His current paintings, nearly abstract piles of landscape detritus that he calls mounds, resulted from this interpretation. Accumulated masses of self-discovery, these mounds are as much autobiography as reflections on art and contemporary culture. Though often subdued in mood and content, they retain a whimsical love of process and material that is captivating.

In many ways, his mounds move beyond realism, but still retain the world within them. They are jumbled masses of detritus, mashed up heaps of cultural baggage and personal symbols. As with the disaster paintings, we still see lots of bad news: broken and dripping objects hang forlornly in the landscape. But these worlds are also introspective and poetic. A pile of snow thaws into slush, divulging frozen and forgotten objects buried during a bleak winter. An abandoned playground is a mash-up of busted and rusty toys. These are not newsworthy events but rather the landscapes of the mind, an inner state.

They are also expressionistic. Berenz says that in earlier works he found it necessary to work toward realism, that he understood quality in art by how refined and correct he could make his paintings appear to the viewer.

Berenz is now creating marks that describe mood and atmosphere. Color is used to evoke states of mind. As in a dream, incongruous depictions are forced to interact. Ducks in the sky become digitized versions we would see in a video game. Figures are broken and mix with flaring and saturated daubs that actively dominate the composition. Images collide in a jumble of noise and vision. In my view, these works become more complete as form and content interweave. As the paintings become less realistic, they become more authentic.

Painting is deeply rooted in authenticity. The hand strives to communicate what the mind’s eye sees, what the heart divulges. It is a strangely accurate barometer of the quality of a painting. A thoughtful viewer can feel when a painting is inauthentic, can negotiate a lie in paint as easily as we can identify the dull delivery of a bad actor.

But authenticity shouldn’t be confused with realism. Berenz is working in an ambiguous tradition—not realistic, but not leaving the world behind either. Moments of painterly ambiguity transform into a bicycle, a stuffed toy, garbage. This move between abstraction and the recognizable world creates a tension between the literal and the imagined, between the conscious and dreamed world. This transition—using paint instead of image to describe ideas—forces Berenz’s paintings into new territory.

Dealing with abstraction can be a challenge. Although it has been a Western tradition in art for a hundred years, abstraction often remains mysterious to viewers. Conceived by artists such as Wassily Kandinsky as a universal art form, today abstraction is often considered to be elitist—paintings for painters. When confronted with the possibility that viewers who relate to his realist works may be reticent to accept the new pieces, Berenz says that his current paintings are the only ones he should be making, the ones that speak most directly in his own voice.

In an interview with Fresh Paint Magazine Berenz stakes out his territory: “I explore the in-between space that is neither real nor artifice, still-life nor landscape, natural nor artificial, messy nor clean, flat nor deep, and dynamic nor static.”

His mounds—combining figure, ground, and sky into a mass of emotion—continue to be an area of exploration. Berenz is also expanding his inquiry into autobiography. Childhood visions rise to the surface. A few are quite grim. Berenz mentions a finger being cut off, a near drowning at a vacation lake. Some of these events may be true, others invented. Ultimately, it doesn’t matter. They feel like the truth and retain an emotional authenticity if not a factual one. They are memories for a workingman artist to mine and pile up for all to see.

Rafael Francisco Salas is a Wisconsin-based artist. He combines landscape, the legacy of portraiture, architecture, and country music into artwork that evokes a strange, rural poetry. 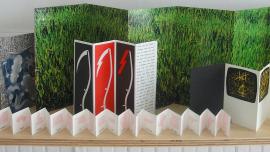 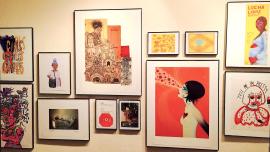