Why is our electrical system so complex? | wisconsinacademy.org
Skip to main content

There are three different types of electric utilities in Wisconsin.

Public utilities provide important goods or services like electricity, natural gas, water, sewage, and internet. In Wisconsin, you can’t pick which utility provides you electricity. Rather, it’s determined by where you live. Customer choice—the idea that an electric customer could pick their utility—was explored in the 1990s in Wisconsin, but was ultimately rejected when it was determined that it would likely result in higher electricity bills for consumers. Because it was cheaper historically to build all of the necessary distribution infrastructure in a certain location for just one utility, that utility was given the exclusive right to sell electricity to customers in the service area.

Utilities are tasked with providing reliable and low-cost power to its customers. They can propose electricity rates that cover costs and provide a reasonable rate of return on their investments. Lacking competition, utilities are regulated at state and federal levels, striving for service that is adequate and reasonably priced.

Electric utilities don’t have the same competition many other businesses do since their customers are determined by where they live. So to keep these monopolies in check, different players provide oversight. Each state has a public utility or service commission regulating the utilities, as well as a customer protection group.

While utilities generate some income through electricity sales, they make money primarily by returns on investments. This business model incentivizes the building of infrastructure such as power plants. Long-term energy planning is important in informing long-term investments. Utilities plan for long-term investments to be covered by an assumed electricity rate and demand. When demand and economics shift—for instance, due to energy efficiency measures or closing a coal-fired power plant before its expected lifetime—they’re not making as much money as anticipated and can end up with stranded assets. This could lead to them attempting to recover costs by increasing electricity rates.

How well the dominant utility business model of selling electricity and building infrastructure is compatible with initiatives like energy conservation, building distributed energy resources including renewable energy and microgrids, community concern over transmission lines, etc. is currently under debate as utilities and customers both look to our future and building a system that works for the public and environment. 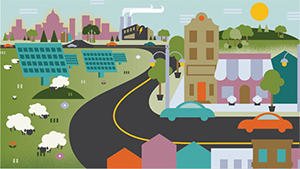 Back to the landing page

Wait ... what does public mean?

Why is our electrical system so complex?

How can I have a voice in energy decisions?

Utilities at a glance chart

At the ballot box