We Are Still In | wisconsinacademy.org
Skip to main content

We Are Still In

In early November 2017, delegates, political leaders, and civil society convened in Bonn, Germany, for the 23rd annual Conference of the Parties (COP23) to the United Nations Framework Convention on Climate Change (UNFCCC). As they had since the UNFCCC was established in 1992, delegates from countries across the world discussed the shared overarching goal of stabilizing greenhouse gas concentrations in the atmosphere. This year delegates focused on the specific goal of creating a legal toolkit to implement the 2015 Paris Agreement to reduce greenhouse gas emissions to keep global warming below 2 degrees Celsius above pre-industrial levels. The Paris Agreement has been officially ratified by 170 countries, with 195 signing on in some form. The U.S. did initially ratify the agreement, planning to meet our share of this international pact by reducing our emissions 26-28% from 2005 levels by 2025. However, earlier this year President Trump announced his intention to pull the U.S. out of the agreement, leaving our country as the only one in the world not intending to participate.

Yet recent federal push and pull on international climate agreements belies the momentum brewing among other actors in the U.S. to address climate change locally and as part of the international effort. These parties—states, regions, cities, corporations, NGOs, and other subnational and non-state actors from an array of nations—have had a growing presence at COP meetings over the years. Indeed, for the U.S., they were the loudest among the American representatives at COP23.

I have been fortunate enough to attend the two COPs following Paris—Marrakech in 2016 (COP22), and Bonn in 2017 (COP23). I can tell you from interactions I have had with other attendees that at least as important as the American withdrawal’s direct impact on global carbon outputs is its symbolic resonance in the diplomatic community. The growing number of American subnational and non-state actors involved in local and global climate change action understand this—which is why some of them funded an entire pavilion dedicated to the assertion that, yes, “We Are Still In.”

The pavilion, called the U.S. Climate Action Zone, operates in parallel with the new “America’s Pledge” initiative led by former New York Mayor Mike Bloomberg and Governor of California Jerry Brown. The Zone hosted six days of programming featuring the efforts of businesses, cities, states, tribes, colleges and universities, and citizen groups to curb greenhouse gas emissions, adapt to a changing climate, promote renewable energy, and so on. As a structure, the Zone was impossible to miss—it was the largest single pavilion at the conference. Its location also rendered it conspicuous: being positioned between the two main conference sites ensured delegates and other attendees would stumble upon it while walking between events and negotiations.

Although I had commitments at other parts of the COP, I was able to spend an entire Saturday afternoon at the Zone. I attended three concurrent sessions and was astonished at the caliber of speakers. One panel—the “U.S. People’s Delegation Town Hall”—featured several prominent elected officials including Senator Jeff Merkley of Oregon, Mayor Bill Peduto of Pittsburgh, and Dan Zarrilli, the New York City Chief Resilience Officer, as well as commissioners and councilmembers from other parts of the country. The event gave members of the U.S. People’s Delegation the opportunity to ask critical questions of the elected officials, on fracking, the Keystone XL Pipeline, and other contentious issues. 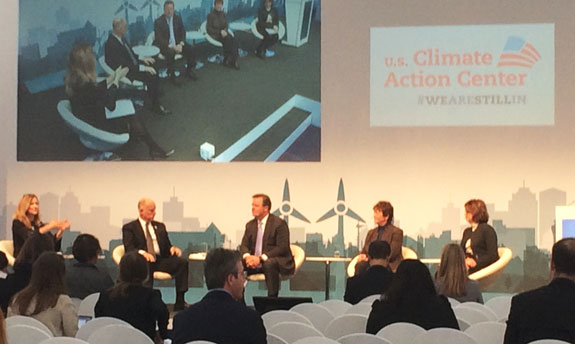 Another Zone event on emphasizing “the business case” for climate action placed Governor Jerry Brown from California (who the UNFCCC actually designated as Special Advisor for States and Regions to COP23) with prominent business owners, including a vice president from Pacific Gas & Electric Company (PG&E). Every one emphasized how being mindful of climate change and its effects (e.g. water scarcity, increase in average temperatures, and so on) are necessary for both financial stability and public health. All participants—regardless of partisanship—were constantly reminding the audience of their belief in international cooperation—between cities, regions, NGOs, businesses, and other actors. This philosophy manifested itself in the session entitled “From Committing to Acting: 22 Actions for Global Cities.” This time, one of the panelists included the vice mayor of Oslo, alongside the mayor of Davenport, Iowa and mayor of St. Gabriel, Louisiana. “The element of collaboration is really important to doing this work,” one panelist remarked. Clearly, this included global cooperation.

Alongside the events, the “We Are Still In” initiative published a report on U.S. subnational and non-state climate action, as well as a declaration of continued support for the Paris Agreement. Over 2,500 parties have signed on, avowing that “in the absence of leadership from Washington, states, cities, counties, tribes, colleges and universities, businesses and investors, representing a sizeable percentage of the U.S. economy will pursue ambitious climate goals, working together to take forceful action and to ensure that the U.S. remains a global leader in reducing emissions.” The unofficial agreement also recognizes the importance of working globally, noting that “it is imperative that the world know that in the U.S., the actors that will provide the leadership necessary to meet our Paris commitment are found in city halls, state capitals, colleges and universities, investors and businesses.”

My afternoon at the U.S. Climate Action Zone lifted my spirits for two reasons. For one, it re-emphasized for me how many subnational and non-state actors there are invested in climate change mitigation and adaptation locally. Perhaps more crucially than this, the Zone’s participants demonstrated a fundamental willingness to engage globally and for the world to bear witness to that aspiration.

Yes, we’ll always have Paris. But, as these efforts demonstrate, I think we still have Paris.

At the Academy, we have been exploring ways that different groups in Wisconsin are working to honor the goals of the Paris Agreement. Through our Environmental Breakfast Series this fall, we are exploring leadership by individuals, businesses, and counties. As the series continues into the spring, we look forward to discussing the role of cities, faith communities, and universities, and we hope you’ll join us for the conversation.

Meredith Keller was the Initiatives director at the Wisconsin Academy from 2014 to 2016, where she led both the Waters of Wisconsin and Climate & Energy Initiatives, and launched the statewide, annual Local Government Summit on Energy & Resilience.