Della Wells is a self-taught artist who began drawing and painting in earnest at the age of 42 and her creative process stems primarily from her personal experiences embellished through the art of storytelling into visual work. Wells' work has been written about and has appeared in several publications including Black Collection by Teri Henderson, Betty-Carol Sellen's and Cynthia J. Johanson’s book, ''Self Taught, Outsider and Folk Art, A Guide to American Artists, Locations and Resources, 2000 and 2016 ed. and one of her images appears in a children's book “The Classic Treasury of Childhood Wonders: Favorite Adventures, Stories, Poems and Songs For Making Lasting Memories”, published by National Geographic and written by Susan Magsamen.

In 2011, an award winning play which was written, inspired by her life, ''Don't Tell Me I Can't Fly'', debuted in Milwaukee. The play was commissioned by Milwaukee First Stage Children’s Theatre and written by Y York. In 2010, the play was selected to be read at the Kennedy Center in Washington D. C., for its New Visions, New Voices Festival. Since its debut in Milwaukee, the play has been produced in Nashville, Tennessee and in Charlotte, North Carolina and Richmond, Virginia The play is published by Dramatic Publishing Company and is included in an analogy of Y York’s plays, “Don’t Tell Me I Can’t Fly: 10 Plays For Children and Families“ published in 2016.

Her dolls, cards and collages are currently sold at The Smithsonian National African Museum of History and Culture in Washington, DC. Inuit Center for Outsider Art in Chicago sells her dolls and cards. She has been a featured artist at the Kentucky Festival of Arts, the largest art festival which features folk, self-taught and outsider art in the United States. Her work is in over 100 private, corporate and museum collections including Saint Kate Hotel, Hurn Museum of Contemporary Folk Art, North Western Mutual Insurance, Museum of Wisconsin Art, Milwaukee Bucks and The Wright Museum of Art. Wells is represented by the Portrait Society Gallery in Milwaukee, Wisconsin, Main Street Gallery in Clayton, Georgia and Marcia Webber Art Objects in Alabama and Mason Fine Art in Atlanta, Georgia. 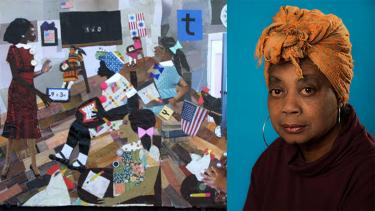