Marcia Bjornerud is Professor of Geology and Environmental Studies at Lawrence University in Appleton. Bjornerud’s research focuses on the physics of earthquakes and mountain-building, and she combines field-based studies of bedrock geology with quantitative models of rock mechanics. Bjornerud has done research in high arctic Norway (Svalbard) and Canada (Ellesmere Island), as well as mainland Norway, Scotland, New Zealand, and the Lake Superior region. She teaches courses ranging from ‘hard rock’ and planetary geology to environmental modeling and history of science.  She received a BS in geophysics from the University of Minnesota and her MS and PhD in structural geology from the University of Wisconsin-Madison.  She then held a postdoctoral fellowship at the Byrd Polar Research Center at Ohio State University and worked as a contract geologist for the Geological Survey of Canada and the Norwegian Polar Institute.

Bjornerud began her professorial career at Miami University in Oxford, Ohio but gave up a tenured position there in order to return to Wisconsin and join the faculty at Lawrence. She was the founding director of Lawrence’s degree-granting program in environmental studies and holds the Schober Endowed Chair in Environmental Science. She uses the landscapes and bedrock of Wisconsin as a classroom and integrates field studies into courses from introductory to advanced levels. With Lawrence students, she has carried out research projects in the Gogebic Range, Baraboo Hills, Marinette County, and the Flambeau Flowage, documenting chapters in Wisconsin’s complex tectonic history. In 2012, Bjornerud was lead author on a pro bono report for the Great Lakes Indian Fish and Wildlife Commission on the geology of the Gogebic Range, intended to serve as a freely available public document and to provide baseline information about the potential effects of an open pit mine on the waters of the Bad River and the wild rice stands in the Kakagon Sloughs.

Bjornerud is a Fellow of the Geological Society of America and was a Fulbright Senior Scholar in Norway (2000-2001) and New Zealand (2009). She was named Outstanding Educator in 2011 by the Association of Women Geoscientists. She is the author of a well-received book, Reading the Rocks:  The Autobiography of the Earth and a contributing writer to the New Yorker’s science and technology blog, “Elements”.

When not studying Wisconsin’s rocks, Bjornerud celebrates other aspects of Wisconsin’s natural heritage as an avid cross-country skier, bicyclist and berry picker. She is the mother of three sons. 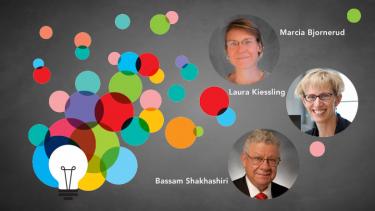