Catching Up with Kimberly Blaeser | wisconsinacademy.org
Skip to main content

Catching Up with Kimberly Blaeser 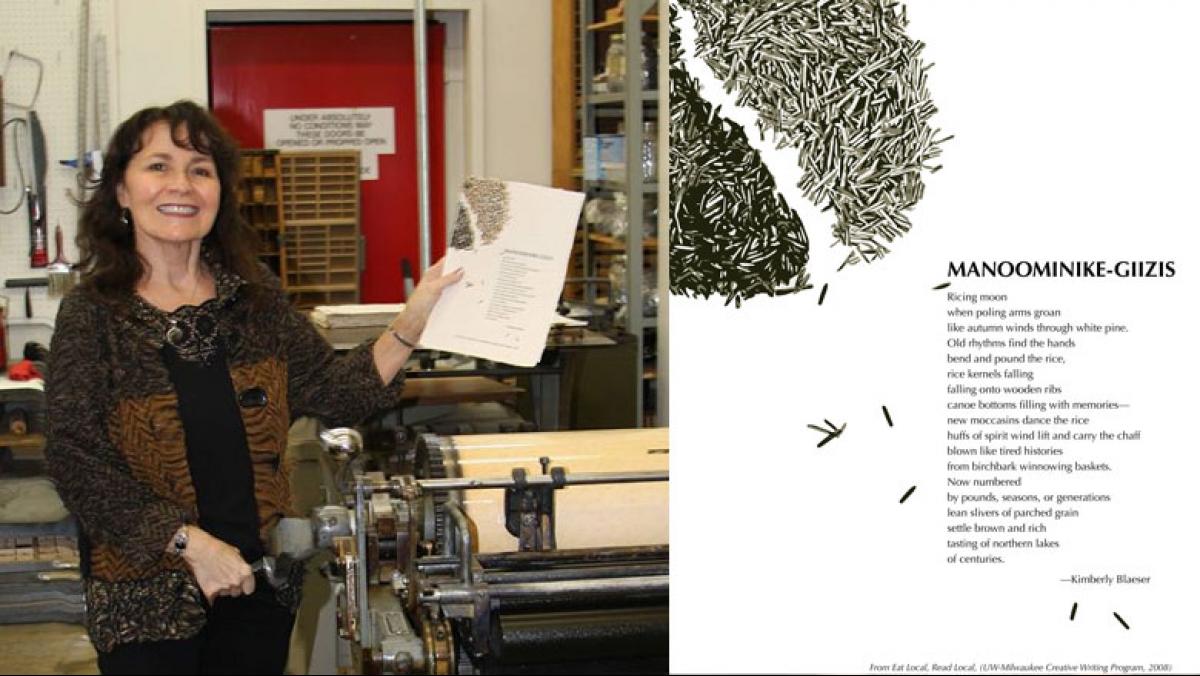 If poet Kimberly Blaeser had to use two words to describe her first year as Wisconsin Poet Laureate, they would be exhilarating and exhausting.

Blaeser, who was appointed to a two-year term on January 7 last year, says her schedule has been filled with appearances across Wisconsin and beyond—fifty-one, to be exact.

From time to time Blaeser was also asked to deliver a poetic benediction to an event, as in during the legislative breakfast at Arts Day 2015 or the inauguration of incoming UWM Chancellor Mark Mone.

Blaeser found herself invited to a surprising number of conferences and panel discussions on the role of poetry, but also found that people outside of academe and the poetry world were equally eager to have her participate in a diverse selection of programs. Blaeser appeared at the Aldo Leopold Center’s “Building a Land Ethic” conference; in a segment of John McGivern’s WPT travel show, “Around the Corner;” and even played a role in the debut production of Morning Becomes Electa, a play about Electa Quinney, a member of the Stockbridge-Munsee Band of Mohican Indians who became Wisconsin’s first public school teacher.

Even with a blistering schedule of 2015 appearances, Blaeser continued to publish, and to teach and work with UWM graduate students in creative writing. Drawing on her passion for teaching poetry and finding ways for people to engage with poetry on multiple levels, she recently recorded a series of video segments for Wisconsin Writes, a program of the Wisconsin Department of Public Instruction. Wisconsin Writes provides a rare glimpse into the writing processes of Wisconsin writers from a variety of perspectives. The series captures the recursive, complex, often messy process of writing.

For her Wisconsin Writes segment, Blaeser shares her background in writing, why she uses different types of technology and mediums to write, and how images are an important part of her writing process. She then transitions into the revision process, explaining subtle changes she made to a historical poem about a prisoner of war named “Mochi,” and to “A Crane Language,” a picto-poem.

Picto-poems like “A Crane Language” combine original photography and verse as a way of exploring what Blaeser calls “the complex harmonies between the vibrant natural world and the resonant human imagination.” They are another way Blaeser hopes to connect with nontraditional audiences.

During October of 2015, an exhibition of her picto-poems and ekphrastic poetry (poems that vividly describe an image or work of art in order to amplify and expand its meaning), Ancient Light, was held in the Jones Gallery of the Dwight Foster Public Library in Fort Atkinson. As a part of the Lorine Niedecker Poetry Festival, she gave a talk amid the exhibit, “Gesture and Silence in Poetry of Place,” that touched upon the ekphrastic poetry tradition.

Blaeser says she draws on the Anishinaabe (Ojibwe) way of being in the world, which is part of her heritage and which involves a foundational understanding of community with nature. “My photographs and picto-poems arise from this understanding. They invite the viewer/reader to imagine themselves in such a space.”

She said that finding herself in a panel discussion with and performing alongside three of Wisconsin’s former Poet Laureates—Marilyn Taylor, Max Garland, and Bruce Dethlefsen—reinforced her sense of the state’s strong poetic tradition and the variety of voices it entails.

What does 2016 hold for the Wisconsin Poet Laureate?

Blaeser says her months are already filling with tantalizing events including a panel discussion for the Academy’s Writing Wisconsin’s Future series (see page 33), reading at the Nelson Institute’s Earth Day Conference in Madison, reading at the Nelson Institute’s Earth Day Conference in Madison, a height-of-color, nature writing workshop this October at the 320-acre UWM Field Station in Saukville, and a residency and performance at Shake Rag Alley. In addition she is working with Wisconsin Poet Laureate Commission members to launch a poetry recitation project which will literally put poetry on Wisconsin’s map—allowing individuals and groups to upload videos of readings to an online map of the state. In conjunction with this, Blaeser will host public recitation events including one already scheduled at UW–Marathon County in March.

Kimberly Blaeser, Wisconsin Poet Laureate 2015-2016, is the author of five poetry collections including Copper Yearning, Apprenticed to Justice, and the 2020 bi-lingual Résister en dansant/Ikwe-niimi: Dancing Resistance. An Anishinaabe activist and environmentalist from White Earth Reservation, she also authored the mo