My garden is usually a source of pleasure, but in early June the weird events in my favorite little space left me unsettled. I’ve been tending the same front-yard garden for more than 25 years, and I’ve never seen an aster bloom in June. Usually, the asters are the stars of my late summer and early fall garden. And yet, there in all its bold purple presence, one of my perennial asters had opened its blossoms and was waiting for the pollinators to come by and renew its life cycle. I thought: We haven’t even reached the summer solstice yet. Will the right insects come along, or will they wake up in late August and wonder where the pollen is? And odd, out-of-synch things just kept happening: like the July raspberries peaking in June, along with oppressive heat and scarce rain. Whoever first called disruptive climate change “global weirding” got the concept down.

This strange spring and summer have triggered many other unsettling events in Wisconsin and the broader Great Lakes region. Wisconsin and Michigan will lose most of their treasured cherry crop this year. The wildly warm weeks in mid-March were avenged by bud-killing frosts in late March and April. A recent Farm Report story quoted Bob Lautenbach, of Lautenbach’s Orchard in Fish Creek, describing this year as “the worst year [he’s] ever experienced,” and his family has grown cherries all his life. The 2012 cherry crop in Door County has all but failed. Lautenbach says the county would normally produce about 8 to 10 million pounds, but this year the prediction is a harvest of only about half a million pounds. Cherries are being imported from Poland to meet demand from consumers used to the summer bounty.

Our family freezer has a permanent space reserved for a large supply of Door County cherries, because I’m married to one of the world’s great cherry pie bakers. Bill’s pies grace our table on holidays and are among our most frequently requested potluck offerings. Part of Bill’s secret is the high-quality Door County cherries. I’m sad for our lost supply, but our loss is no comparison to that of the growers in an already challenging business.

Maple syrup production—so highly dependent on warm days and below-freezing nights in March—suffered a fate similar to that of the cherry crop this year. The U.S. Department of Agriculture says Wisconsin production fell 68% from last year, with a mere 50,000 gallons of maple syrup produced this spring, down from 155,000 gallons produced last spring. The going rate in 2011 was almost $38.00 a gallon—that’s a lot of lost syrup and lost local revenue. From Minnesota to Quebec, only Maine had a decent sugaring year. I think ahead to winter breakfasts and wonder if syrup hoarding is ethical in times like these, although I shudder to think what the price will be.

June brought other weird events as well. The local paper featured a discouraging story about corn crops stunted by the hard-baked soils that crusted after early heavy rains followed by prolonged hot, drought-like weather. Then, the next week, stories about the record-setting torrential rains that inundated Duluth and Superior were all over the regional news and Facebook. Meanwhile, nasty algal blooms were making headlines, and the summer stink was rising from the shores of local lakes again. Oh, did I mention the forest fires raging across Michigan’s eastern Upper Peninsula?

Are we connecting dots yet?

2012 is the warmest year in modern history (at least since we’ve been keeping records). While that might feel like good news on a cold February night, the effects of this spring’s heat aren’t very cheery, and the trends tell us that the down sides are likely to become more serious and more unpredictable with each coming year.

As any good climate scientist will tell you, a fluky jet stream pattern like the one causing this year’s wacky weather isn’t necessarily a prediction of the way things will be in the future; nor is it definitive proof of climate change. But our experience this year certainly aligns with ongoing warming trends and the predicted outcomes of a changing climate, which include more extreme weather, increases in intense storms, and disturbed phenology (the timing of life cycles of plants, birds, insects, etc.).

The nonprofit group Climate Central released a map in June that shows how temperatures have increased across the United States over the last century. Since 1970, the Upper Great Lakes states—Minnesota, Michigan, and Wisconsin—have had the dubious distinction of being among the most rapidly warming states in the nation. This is not welcome news if you depend on some of the world’s most important sources of fresh water, if you like locally grown food and a healthy farm and forest economy, if you value white pines, burr oaks, and maples, if you dislike heat waves and worry about their impact on the poor and vulnerable, or if you enjoy trout fishing (because you can kiss trout goodbye when water temperatures get too warm).

Heck, even dairy cows produce less milk when they are hot and bothered, and who can blame them?

And these examples only scratch the surface of how a warming and climate-altered Wisconsin will affect our lives.

Wisconsin can, and should, be a leader in creating strategies for adapting to this new, warmer world and also for reducing the size of our state’s “carbon footprint.” This is a “can do” state, and we don’t need to wait for the ultimate federal plan or some imagined perfect solution to begin working on the task at hand.

Some of the world’s leading climate experts are right here. We have a long tradition of conservation and a love of Wisconsin’s living landscape. We care about the way policy decisions affect farmers and businesses, neighbors, families, and our great outdoors. Besides, there’s that deep Midwestern ethic that just hates waste and procrastination. If we roll up our sleeves and work together to find solutions, we can make a difference for Wisconsin’s future, and perhaps the world’s.

In that spirit, I’m pleased to announce that the Wisconsin Academy is embarking on a new project to foster constructive dialogue on Wisconsin’s climate and energy future. We’ll look for promising leadership and opportunities to advance Wisconsin climate and energy initiatives, explore some of the cultural and psychological barriers to responsive action, and seek out and share stories of Wisconsin innovators in energy efficiency and related fields. Our mission is to connect people and ideas for a better Wisconsin, and the climate and energy challenge we face needs clearer connections and groundbreaking ideas for Wisconsin to live up to its potential to lead as we know it can. 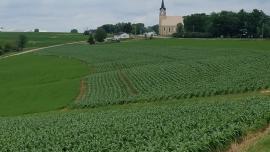 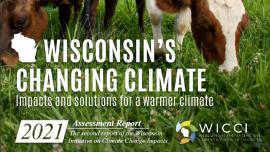 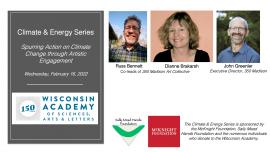 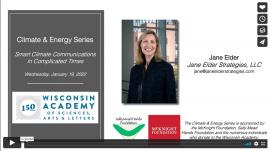