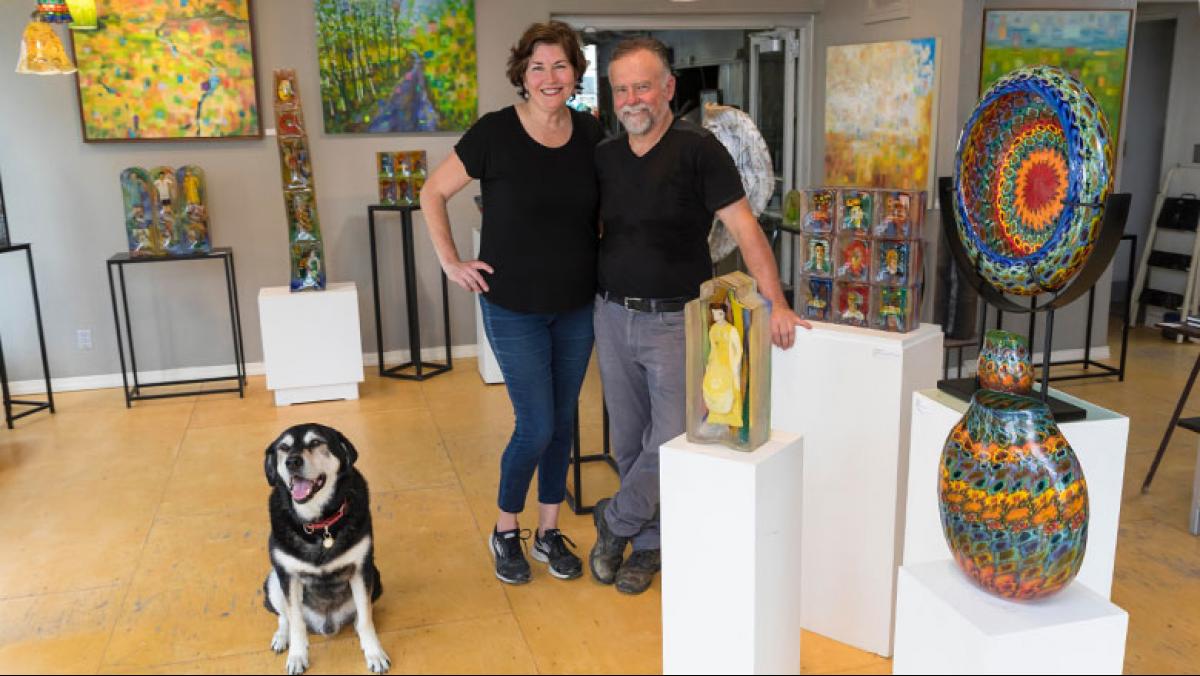 The inviting orange glow emanating from the back of the Popelka Trenchard Glass studio belies the fury that lies within the 2,000-degree furnace: three hundred pounds of molten soda-lime glass.

While the front of the studio is lined with luminous bowls and vases, lamps featuring swirls of color, and charming figurines encased in glass, the back of Popelka
Trenchard Glass looks like an industrial forge. An iron casting ladle, steel blowpipes, and oversize shears rest just steps away from the work stations where Sturgeon Bay artists Jeremy Popelka and Stephanie Trenchard transform molten glass into sometimes practical, sometimes whimsical works of art.

Working with hot glass is a delicate and sometimes dangerous endeavor. But this husband-and-wife team, whose success in the studio depends on their ability to move quickly among tight spaces with little physical protection, has an almost innate knowledge of each other’s next move.

“From the outside it looks a little bit chaotic sometimes, and you wonder how we manage to not hurt each other,” says Jeremy. “But, in reality, it’s just like a dance we’ve done every day for 25 years.”

Twenty of these years have been spent pushing the boundaries of glass artistry in a studio-gallery located in Sturgeon Bay’s historic downtown. Working from the gateway to Door County, Jeremy has gained a global following with his kaleidoscopic glass vessels; while Stephanie has racked up award after award for her painterly sand-cast sculptures.

Though the labels that accompany the works of art displayed on the sunlit shelves of their gallery suggest each piece is a solo endeavor, collaboration lies at the heart of Popelka Trenchard Glass.

A thirty-year veteran of the glass art world, Jeremy specializes in glassblowing, cast glass, and murrini, which is considered among the most labor intensive and difficult of all glass methods. Developed in the Middle East more than 4,000 years ago and revived by Venetian glass artists in the 16th century, the murrini style of glass art is identifiable by its fluid, multi-colored patterns.

The murrini process begins with layering molten glass colors on a steel rod, stretching that glass into a four- to five-foot-long cane, and cutting that cane into half-inch slices, also known as murrini. After repeating the process to create rods of varying designs, up to five hundred murrini slices are assembled into complex patterns on a flat surface.

“The murrini slices end up being the patterns in the vessels,” explains Jeremy. “So they have to get fused together and then clear glass is added over, … and then it gets blown out.” The “blown out” to which Jeremy refers, involves an assistant blowing on the end of a long, metal tube inserted into the end of the molten glass in order to get the vessel to expand to just the right proportions.

In any hot glass process, the master craftsman (in glass terms, the “gaffer”) must rely on an assistant to supply tools, open furnace and kiln doors, protect the gaffer’s arms from the heat, keep the work-in-progress pliable, and, of course, blow out the glass. 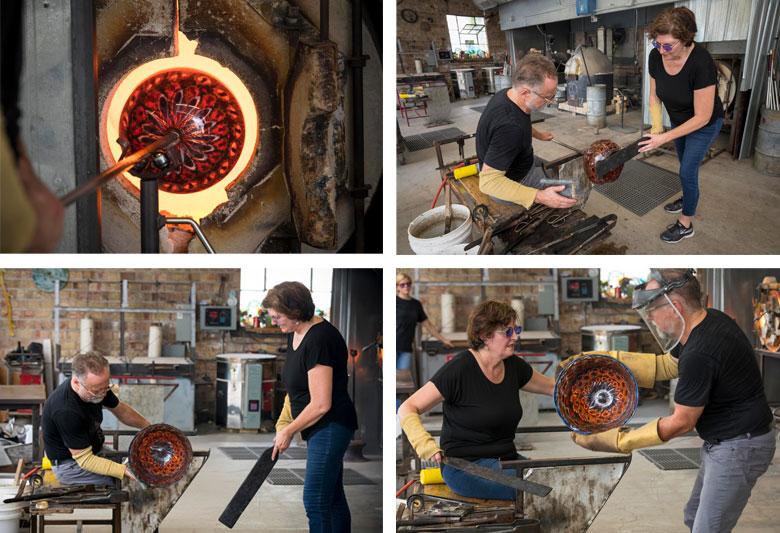 For practiced glass artists like Jeremy and Stephanie, the dance of studio work is second nature. “We know how pieces are made, different techniques. Unless you’re doing something really exotic, you can go into a different place and be a pretty functional assistant right away,” says Jeremy, noting that, “outside of a few tweaks that each artist has, there’s a foundation of dance steps that everybody knows.”

For Stephanie, these dance steps—those of the assistant, and those of the gaffer—were learned slowly over two decades. A painter by training, she took just two classes in hot glass during her undergraduate studies at Illinois State University where she met Jeremy, an art major focusing on glass, in the early 1980s.

They married in 1987 and spent the next decade pursuing their individual artistic endeavors in California—Jeremy in hot glass and Stephanie in textile design. After years honing their crafts on the West Coast, the couple made their way to Door County, drawn to the slower pace of life and proximity to family.

“It was kind of a restart,” recalls Jeremy. “California was an expensive place … and I thought, well, this is a place where we can actually be artists, start over again. I could build a studio and we could try to make it happen.”

With support of a small startup loan and incubator space furnished by the Door County Economic Development Corporation (DCEDC), the studio dream slowly became a reality. On a shoestring budget and with tools borrowed from Stephanie’s father, the couple built a bare-bones studio in the DCEDC warehouse in 1997 and launched Popelka Trenchard Glass.

While the two didn’t yet have gallery representation, they did have access to a fork lift and loading dock, as well as invaluable business support services, thanks to the DCEDC. The establishment of a new art studio also marked the earliest professional collaboration between Jeremy and Stephanie, who saw their shared investment as reason enough for Stephanie to try her hand with glass.

By the time Popelka Trenchard Glass relocated to its current space on 2nd Avenue in 2002, Stephanie was not only working in glass but inventing and perfecting a technique that incorporated sculpture, painting, and sand casting.

“I saw immediately we had something we had never seen anyone else do,” says Stephanie.

The sand-casting process uses molten glass poured directly into a pre-formed mold made from compacted sand. Stephanie’s approach amplifies this process by taking small, glass-sculpted objects and figures painted with high-fire enamel and embedding them into molten glass. She describes the resulting works as “still-life paintings in glass.”

Stephanie’s sand-cast works met with immediate success at exhibitions in the Midwest, inspiring the couple to bring more of their individual art histories, personalities, and interests to the table in the spirit of collaboration.

“Stephanie has a lot of wisdom and history that is not within the glass field, … and I knew that wisdom would make for a more dynamic place,” says Jeremy, adding, “we constantly need each other’s feedback—for better or worse—about what comes out of the kiln.”

As their artwork gained critical attention and garnered exhibits in increasingly larger venues, from the SOFA (Sculpture Objects Functional Art and Design) Fair in Chicago to the International Exhibition of Glass in Japan, Jeremy and Stephanie began accepting requests for classes and workshops. Since developing in 2008 a studio schedule that balances teaching and practicing, the duo has guided more than 350 students in glass blowing and casting techniques.

“Jeremy and I have a really shared approach of generosity of information with people,” says Stephanie. “We don’t withhold techniques or style. When students come in, we share it.”

In recent years, that generosity has taken the artists beyond their little corner of Wisconsin to share their craft at the nation’s glass centers, including New York’s Corning Museum of Glass. But perhaps their most significant contribution to the international hot glass community happened at a bottle-making facility 8,000 miles away from home.

The Bangkok Glass Studio, Thailand’s first learning center for hot glass, was established in 2017 by Bangkok Glass Public Company Limited under Jeremy and Stephanie’s guidance. Unlike any of their other experiences, this one began with the discovery of an intriguing e-mail in their spam filter asking, “What is your availability to come and teach glass artists in Thailand? To start a glass-blowing studio.” Stephanie says they were extremely skeptical this was a legitimate offer.

But the man behind the e-mail was a top executive of Bangkok Glass Company, a mega-manufacturer of glass and packaging products throughout Asia. With six manufacturing plants and a growing line of glass products, the company’s president was looking to find new ways to use their existing facility and material to gain further prestige in the glass world. Thus the idea for a hot glass studio was born.

But, given its novelty in Thailand, the studio would need to serve first and foremost as a training center in hot glass design and technique. With no immediate connections to the art glass world, Bangkok Glass Company executives set out to find artists with an intimate knowledge of hot glass and a willingness to share that knowledge.

Their search led them to the Popelka Trenchard Glass website, where their initial contact led to the exchange of ideas and proposals. Bangkok Glass Company said they had assembled a group of employees and graduate art students from the neighboring Silpakorn University who were eager to learn. Jeremy and Stephanie decided to take a “leap of faith” and bring their medium into uncharted territory.

“To go to a place that has no history [in art glass], it’s a heavy responsibility,” Jeremy says. “I felt the weight of that, but it never was consuming. I felt up to the challenge.”

For a six-week period beginning in January 2017, Jeremy and Stephanie taught Thai students the fundamentals of glass blowing and hot glass studio work. At times the experience pushed the couple beyond the boundaries of their craft as they learned to adapt to the stifling heat of the studio and the limited English of their students. Visual cues and chalkboard translations bridged the language barrier, and work with the tools and techniques became their sign language, as they taught their students the required steps for the dance.

When the couple returned to Thailand in April 2017 as honored guests of Bangkok Glass Studio for the grand opening, they did so with a newfound appreciation for the simple mix of sand, soda ash, and limestone that changed the course of their lives. Even today, Bangkok Glass Studio students reach out to Jeremy and Stephanie, requesting video chats and e-mailing photos of their own journeys in the hot glass world.

“You realize there are other possibilities of things that you can do to broaden your mission,” Jeremy says. “The main thing Thailand did for me personally was give me permission to dream a little bit. It makes me want to be more ambitious with what we do in the future.”

Alyssa Skiba is the Arts, Entertainment & Literature Editor with the Peninsula Pulse newspaper and Door County Living magazine. She lives in Ephraim. 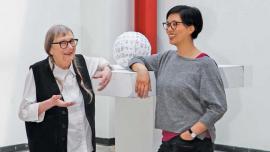 @ the Watrous Gallery
Language as Order and Play 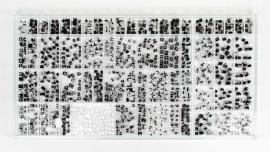 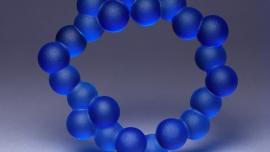 @ the Watrous Gallery
Donald Friedlich: A Life of Stone, Gold, and Glass