Memory, History, and the Life of a Community 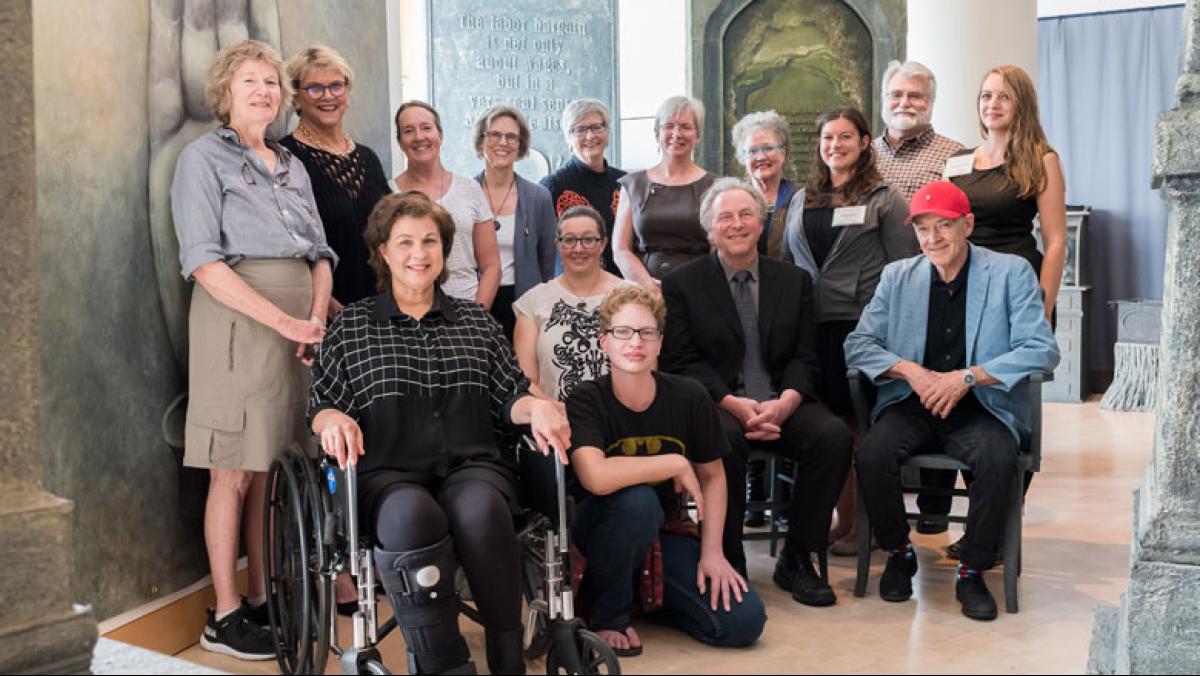 Artist Terese Agnew (seated in wheelchair after an art-related accident) and her collaborators for the epic Writing in Stone installation. Photo by Studio Indigo Photography.

Perched on a hilltop in LaFarge, Star Cemetery is just across the road from artist Terese Agnew’s house. Over the past decade, Agnew has visited the tiny cemetery almost daily on her walks, finding inspiration in its sweeping views of the Kickapoo River Valley. But in 2011, as politics in the state began to shift, Agnew found herself worrying during her walks.

“Policy changes were coming down from the Capitol seemingly without historical consideration, or a long-term view of the future,” says Agnew. “Some people felt this was fine, as long as they saw their taxes go down. But many people felt the traditions of the state were under siege.”

As political debate intensified across the state and became increasingly acrimonious, Agnew recalls, “people reacted emotionally, and it hurt relationships.”

Known for large-scale public installations and intricately detailed fiber works that embrace environmental and social justice themes, Agnew understands the political and cultural power of art. Made up of 30,000 individual clothing labels over the course of two years, her large-scale Portrait of a Textile Worker (2005) drew considerable public attention to the plight of the millions of low-wage sweatshop workers who make our clothing.

Distressed by the fraying fabric of her state and community, Agnew wondered how she could help pull people together and bring wisdom to the debate. She found her answer in Star Cemetery’s timeworn headstones. Reading the fading epitaphs of the town’s early settlers, Agnew thought about the importance of memory and history in the life of a community. Why, she wondered, do we create monuments only for death and war?

With a new, large-scale installation titled Writing in Stone, Agnew seeks to create monuments not to death or war but to transformative ideas and events from Wisconsin’s past. “We seem most to want to honor conflict—violent conflict,” she says, pointing to the current political and cultural tempest surrounding Civil War monuments as one example. “[But] there are so many other ways that human beings over time have struggled to resolve problems, and they deserve a place in our memory that’s bigger than the place they’ve been granted.” 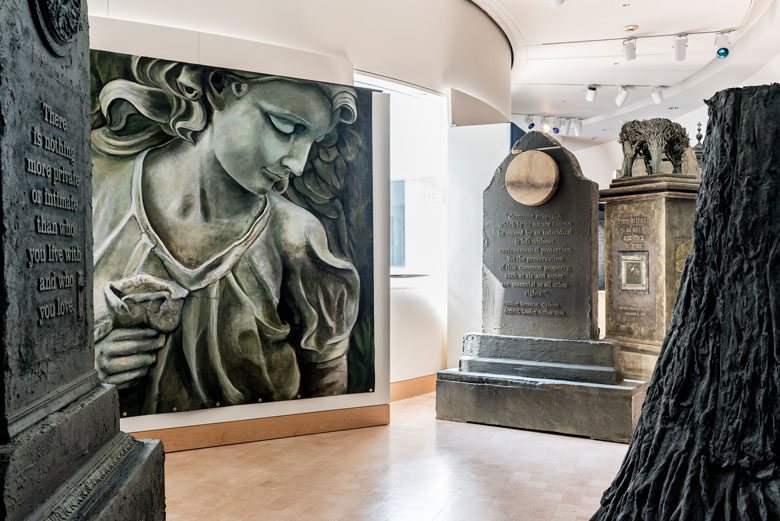 Now on view at the James Watrous Gallery, Writing in Stone invites viewers into a garden of monuments that take their visual cues from traditional shapes and motifs found in cemeteries and public places throughout Wisconsin. Each component of the installation—from a tribute to Caroline Quarlls, the first known African-American to escape slavery through Wisconsin’s Underground Railroad, to a piece honoring the Menominee Forest Keepers, whose stewardship has preserved one of the largest remaining old-growth forests in the world—challenges what we have come to expect from civic monuments.

Although Writing in Stone was not conceived specifically in response to the debate over Civil War monuments, it’s almost as if the installation proposes an alternative (and timely) vision to consider: exemplary moments in our shared history that can draw our communities together rather than enshrine and amplify our differences.

Around the time Agnew began planning Writing in Stone, she was introduced to Tom Thibodeau and Rick Kyte, two professors at the D.B. Reinhart Institute for Ethics in Leadership at Viterbo University who had a deep influence on Writing in Stone. Kyte’s book, Ideas Unite, Issues Divide: Essays on the Ethical Life, “examines contemporary moral struggles in light of our shared commitment to the ideas that bind us all together in shared human experiences.” For Agnew, the book’s theme struck an important chord.

“If we want to move beyond the issues that divide us, it makes sense to revisit the historical leaders and events that still command broad-based esteem,” she says. “It makes sense to look at how and why things are the way they are now, at the best historic examples of ethical choices that shaped this place we call home.”

Wandering among the resulting sculptures evokes the experience of being in a town square or a cemetery—if that cemetery had sound, music, and the occasional moving statue. At the opening of the Watrous exhibit, actor Flora Coker performed as a “living statue” of  suffrage and civil rights crusader Belle LaFollette. The installation also includes an audio experience by sound artist Rob Danielson (who happens to be Agnew’s husband) that adds an extra dimension to one of the works.

One of the more than twenty monuments in the installation invites visitors to reflect on the gently curving crop rows that help make Wisconsin’s hilly farmland so productive. Devised by the Civilian Conservation Corps working in the state, the practice of contour farming stems soil erosion and supports the health of working cropland. Vernon County, notes the text on the monument, now has more acres of contour-farmed land than any other area in the nation.

Another Writing in Stone monument offers testament to the various political factions in Wisconsin committed to standing against slavery that went on to establish the national Republican Party. The sculpture, a faithful recreation of the door through which the newly minted Republicans passed on the night the party was formed, almost seems to beckon viewers to enter and share in the spirit of purpose and forward thinking that must have suffused that gathering.

Other sculptures pay tribute to Walter Bresette, an Ojibwe leader and advocate for a Seventh Generation amendment to the U.S. Constitution that would obligate lawmakers to consider the impact of legislation on future generations. From within a small grove of sculpted trees, the recorded sound of Bresette’s own soft voice, layered with an audio naturescape created by Danielson, emerges like a whisper in the leaves, urging that strength and truth be tempered by gentleness in confronting the social and moral issues of the day.

Not all the elements of the Writing in Stone installation are memorials to people and ideas of the past. Some, such as the monument honoring a long-term Monarch butterfly habitat restoration project outside Milwaukee, pay tribute to ongoing efforts by people who are very much alive today. 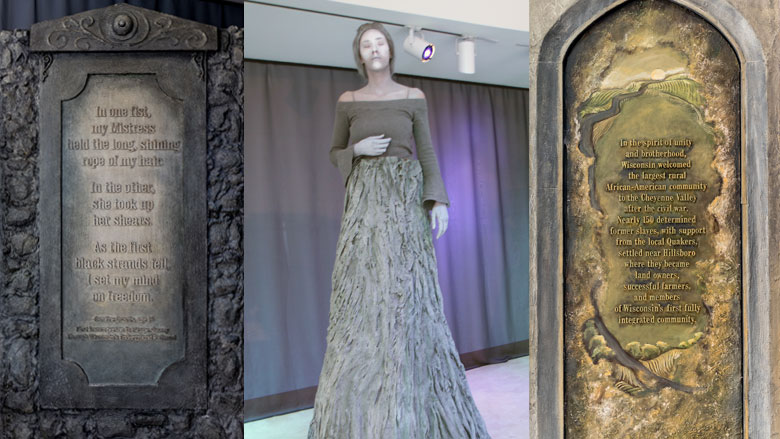 While the subjects of the monuments composed for Writing in Stone are diverse, a common theme unites them. “I was drawn,” Agnew explains, “to people in history who worked harder, more courageously, or simply against the odds to solve the problems of their time. Most of all, I was moved by the people who found another angle, another possibility, outside the bounds of the status quo.”

Agnew says it was especially daunting to decide what to include in the installation. The task began in earnest with a comprehensive list of recommendations made by Kathy Borkowski, director of the Wisconsin Historical Society Press. From these recommendations, Agnew assembled a reading list and invited book groups to read, discuss, and share favorite quotes and moments for the project. She hoped that by reading and responding to these books, “people could begin to remember, learn from, and inspire others with the knowledge our ancestors left us—even before the sculptures were built.”

Research and construction for Writing in Stone spanned more than three years and involved a huge cast of collaborators. (Full disclosure: the writer of this piece was one of them, and participated primarily at the beginning to help launch the project.) Agnew is no stranger to working with large groups; many of her projects have involved teams of artists, craftspeople, organizers, and funders. But Writing in Stone, Agnew says, breaks her own record.

The principal team that physically created the installation includes Diane Dahl, a mixed-media artist whose mural work has been commissioned by Wisconsin businesses; Elliot Meadow, who previously worked creating sets and props in New York City and whose own paintings have been exhibited in local galleries; jewelry-maker and glass artist Peggy Krzyzewski; and puppeteers and display artists Gene and Lynette Lombard. The building team also included carpenters Jim Krenn, David Moynihan, and Jeff Miller, and organizer Julie Hoel. They were backed by a far larger group of historians, writers, and even pie bakers, because Agnew knows that artists, like armies, run on their stomachs.

Constructing the sculptures presented a new set of challenges. Previously, Agnew used actual stone in her works, such as the gargantuan Rockmen Guardians along the Rock River recreation path in Rockford, Illinois. Another project incorporated an entire grove of tree stumps cast from concrete. But because Writing in Stone was planned as a traveling installation, practical considerations ruled out such heavyweight materials. After exploring other options, Agnew and her team found it worked best to build forms with lumber and foam obtained as factory discards, then coat the forms with a product used for creating movie sets and props. The final step was a series of translucent paint washes by artist Elliot Meadow to create the illusion of lichen, soot, and the passage of time.

Although it is not a monument, one piece from Writing in Stone seems to express most clearly the spirit the team of artists brought to this incredible collaborative project. A two-dimensional banner created specifically for the installation at James Watrous Gallery depicts a Shaker motif common in Wisconsin cemeteries: a heart resting in the palm of a hand. “To me,” says Agnew, “it’s about welcoming others with an open heart, and putting your hands to work at what you believe in.”

Judith Woodburn is a Madison-based freelance writer and editor. Her essays and articles have appeared in many publications, including the New York Times. She’s written several nonfiction books for children, most recently a book on mindfulness: Your Happiest You (American Girl, 2017). 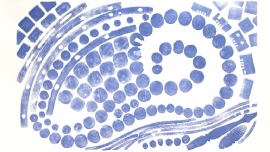 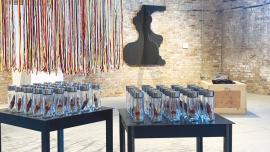 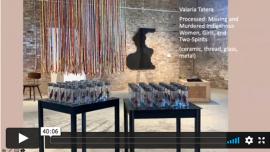 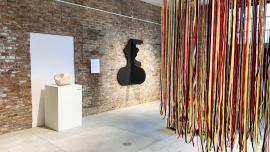