Painting Beyond Walls by David Rhodes 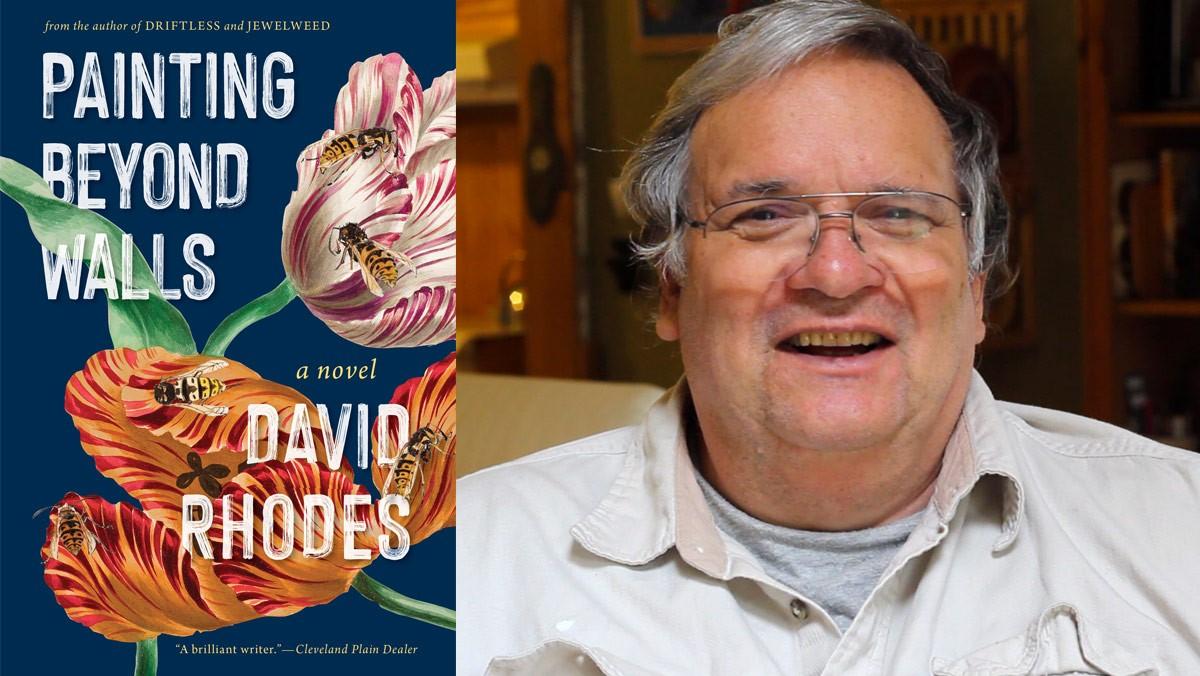 In his new novel, Painting Beyond Walls, David Rhodes returns to the hamlet of Words, Wisconsin, the setting of his two most recent novels, Driftless, and Jewelweed. It is now 2027 and change is on everyone’s mind: environmental degradation, aging, class disparity, and sexual politics. August Helm, now thirty, has traded his idyllic rural life in the Driftless region for an academic life in Chicago. There, somewhat monastically, August studies adaptive immunization engineering—the intimate cosmos of the human species’ physical, genetic, and biochemical underpinnings.

Enter Amanda: independently wealthy, smart, and most importantly, possessing the precise physical and hormonal biome that momentarily pulls August out of his head and into a confluence of brilliant sex. Still, August responds to their primal joy like a scientist, “Amanda and I were simply gene-expressing the algorithms of our breeding congenators.” In August’s new world, feelings are no longer just feelings; they are rooted in our genes. But sex, privilege, and power get the better of him. He returns home to Words to reconnoiter and recover the part of him that got lost in Chicago.

But the hamlet of Words is having its own growing pains. August’s parents, Jacob and Winnie, are feeling their age. August’s best friend, Ivan Bookchester, has developed increasingly radical ideas about social change. The mysterious orphan Hanh, formerly known as Jewelweed, cares for the ailing Lester Mortal and tends to her orchard and wild ginseng, caught between Ivan and August. Forest Gate—a collective of uber-wealthy refugees, fleeing urban blight and environmental collapse—has bought, fenced off, and developed their own version of utopia on a huge swath of prime land near Words.

Like a melting glacier, Forest Gate looms large in the present and future. Its wealthy inhabitants are both eccentric and traditional but, it seems, only because they can afford to be. As Ivan puts it, “The Forest Gaters couple heard the faint heartbeat of something better and came to stamp it out.” Technology, at its best and greedy worst, is both their master and modus operandi. They hire locals to do their dirty work.

The story turns when August takes a temporary house-sitting job for Thomas and April Lux in Forest Gate. Suddenly, August is stretched between worlds, a border skirmish of beliefs and boundaries: his fascination with the lives of the rich; his loyalty to Ivan and loved ones in Words; his head-spinning attraction to the mysterious April who, it seems, has ruffled many feathers in Forest Gate. In essence August becomes Words’ unofficial mole, stumbling on the cracks of his own, and Forest Gate’s, internal dramas. In a clever bit of writing, August’s first day at the ‘Gate’ includes a Scrooge-like series of visitations by several members of the community that will lead to a transfixing conclusion.

Rhodes, as always, lifts the daily human struggle to a higher and more complex conversation, understanding that humans will always struggle with change and thus will always need community to navigate that journey, and that the natural world—including our internal biochemical configuration—will be our guide and teacher.

Guy Thorvaldsen’s poetry has appeared in various publications, including Alligator Juniper, Poet Lore, and Verse Wisconsin. His first book of poetry, Going to Miss Myself When I’m Gone, was published in 2017 by Aldrich Press.