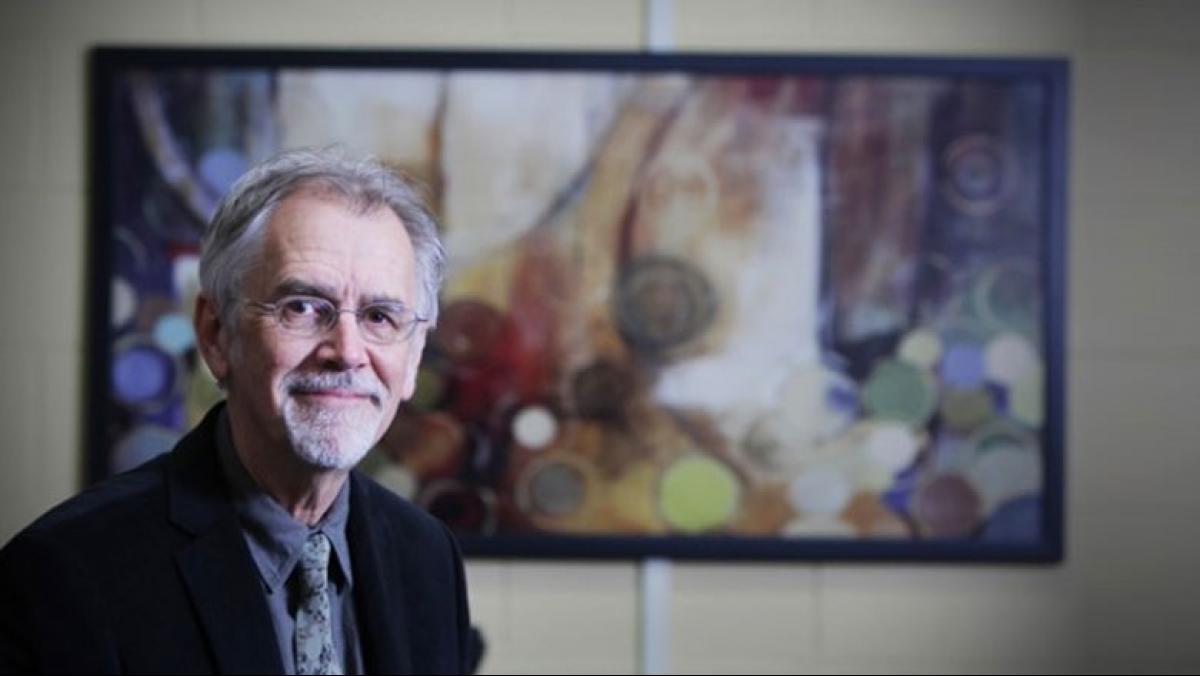 “It was a typically frigid winter night in Wisconsin, and I, having taken on the admirable habits of my adopted state, was having a drink with a friend in a nice warm Wisconsin bar, and, believe it or not, sharing a plate of fried cheese curds,” says Garland.

Originally from Kentucky, Garland has been an Eau Claire resident for long enough to recognize the humor in his situation.

“In fact,” he adds, “I suggested [to Cofell] that when the Commission calls future Wisconsin Poets Laureate to tell them they’ve been selected that if the poets are not in a tavern at that very moment sharing a plate of fried cheese curds, then the Commission should just move on to the next choice.”

A professor of literature at UW–Eau Claire and well-published poet with two books under his belt, Garland is a known quantity in the poetry world. His workingman’s approach to verse is reflected in deeply humanistic and eminently accessible poems. In his first poetry collection, The Postal Confessions, which earned the prestigious Juniper Prize for Poetry, Garland chronicles his years carrying the mail in a classic American voice, discovering deeply felt significance within everyday experiences often drawn from the lives of the folks who lived on his rural mail route.

Growing up in rural Kentucky, Garland recalls a home in which academics weren’t necessarily pushed, and a school where poetry wasn’t presented as a field of study much less a career option.

After high school, Garland knocked around a bit and moved from job to job, working as a termite inspector and janitor at a motel until settling in to a job with the United States Postal Service. He was assigned to the same route his mailman grandfather had covered for over forty years. During this time he was writing poetry, publishing some, and even attending summer writing conferences.

“I think a lot of us wrestle with whether or not we’re living the life we choose, or the life we more or less fell into,” he says, noting that it wasn’t as if he “suddenly decided to become a writer.”

Garland credits music by singer-songwriters of the day—Joan Baez, Leonard Cohen, Joni Mitchell, Neil Young—as well time spent “just reading poetry,” which he says he did then a great deal more than he does now, with an eventual decision to pursue his craft and teach as well.

“I thought working for living, at a ‘regular,’ decidedly non-academic job, was a perfectly good way to be a writer. And I still do,” he says. “It’s just that after a time I began to long for a little more conversation, and began to have the dangerous inkling that I might want to teach.”

It was a two-week writing workshop in Port Townsend, Washington, where Garland met with friend and mentor William Stafford, that convinced him he was on the right course. The two talked frequently that weekend, and Garland read writers and poets from all over the world.

“I realized how starved I was for conversation about writing, and that having done my time at a whole host of jobs, maybe I should stop looking down—in a sort of reverse snobbery—on the academic world. I had a rather robust working class bias against all things overtly intellectual, and it took me many years, many bundles of mail, to chip away at that. After the conference I drove down the coast of Washington and Oregon by myself, and one evening (I know this sounds corny) as I walked along the ocean near Cannon Beach, I knew it was time to live another way, to do whatever I had to do, go wherever I had to go to become a better, more fully engaged writer. The need to write was something I just couldn’t shake, and I realized there were things, stubborn as I was, that I still needed to learn, and I might need to leave home to learn them.”

Upon his return to Kentucky, Garland applied to the MFA program at the Iowa Writers’ Workshop. To his delight, his application was accepted. He resigned from the postal service a year and a half later, took all his savings out of the bank, and moved to Iowa to become a full-time student.

Upon graduation Garland bounced around teaching jobs at University of WisconsinMadison, the University of Iowa, and the Iowa Summer Writing Festival before joining the UW–Eau Claire Department of English in 1996.

His poems, stories and essays were finding publication in journals like Chicago Review, Poetry, Ploughshares, Prairie Schooner, Poet and Critic, and a few anthologies, but it was with the 1995 publication of The Postal Confessions that Garland felt for the first time like he was giving voice to the unknown residents of his rural hometown. According to Garland, the book is in some ways a paean to the particular time and place in Kentucky.

“I felt as if I owed something to the place where I was born, and the people there—particularly my parents and grandparents. There was a story to tell, a story they lived and yet never had the opportunity to fully and publicly articulate. So, I thought, among other things, maybe the poems, though personal, might … serve as a small acknowledgment and testimony to a certain place and time. There’s something the writer James Baldwin said, about how history is not what happens to illustrious or notable people, but history is what happens to ordinary people every day.”

Place and time are themes Garland returns to again and again in his work. Garland is particularly interested in promoting the connection between poetry and place. He hopes that by urging young as well as young-at-heart writers to write of the places they know—towns, cities, farms, cabins—that poetry can be used as an everyday tool to understand and navigate life.

“To map the cities and towns and countryside of Wisconsin from space is one thing, but to creatively render life at ground level, down on the human scale, is the job of poetry,” he says.

Indeed, the metaphor of poetry-ascompass is something Garland believes is only limited by the scope of our imaginations.

“We have remarkable technology for mapping and providing geographical information. But Google Earth, or Chamber of Commerce websites, or reams of demographic numbers still don’t honestly explain how it feels to live in a place,” he says. “These remarkable tools don’t provide the living record of the deep emotions, dreams, aspirations, sufferings, and quiet triumphs of an ordinary person living in Augusta or Oconomowoc, South Milwaukee or Barron. However, if you read the poems of Lorine Niedecker, or the essays of Michael Perry, or the journals of Aldo Leopold, you begin to get another kind of ‘mapping,’ one that reveals more of an inside story that maps not only the global coordinates, but the life that quietly happens in our heads and hearts, and the connection of that life to where we live, the roots of that life in the places we know and love.”

And Garland will travel to lots of the places we know and love across the state.

As Wisconsin Poet Laureate Garland receives an annual travel stipend of $2,000 and a week-long residency at Shake Rag Alley in Mineral Point, in addition to a commemorative broadside and other recognition opportunities. However, the stipend doesn’t go very far when you consider the amount of travel Garland will do over this tenure.

“Former Poet Laureate Bruce Dethlefsen put over 17,000 miles on his car during his two-year tenure,” says Commission chair Catherine Cofell, noting how the stipend didn’t even come close to covering his expenses.

Then-Wisconsin Academy executive director Margaret Lewis noted the essential nature of the Wisconsin Poet Laureate and articulated a case for the Academy to “adopt” the program.

“The poet laureate plays a crucial role in keeping the arts accessible and vital— to all age groups—and acts as a statewide emissary for poetry and creativity,” said Lewis, reflecting the Wisconsin Academy’s support for the Poet Laureate Commission for the future “in order to ensure the survival of this meaningful program.”

While the Commission and Wisconsin Academy both support Garland and provide promotion for his appearances across the state, It’s ultimately up to Garland as to how he will schedule his time has Wisconsin Poet Laureate.

An ardent ambassador for poetry, Garland says that beyond the usual readings he will devote time as Wisconsin Poet Laureate to making a case for more public support of the arts in any and all forms. He believes that poetry provides other ways of knowing and getting at the truth that can’t be found through data mining or public opinion polls.

“The ‘knowing’ that takes place in poetry and other works of art is experiential, ‘felt’ knowledge. We have within us more capacity for compassionate and honest knowing that our individual experiences can fully account for,” he says. “Poetry, while drawing from our separate and unique experiences, also draws from a fund that transcends that separateness, and is much older and wiser than any one of us.”

For more information on Wisconsin Poet Laureate Max Garland or to see a schedule of his upcoming appearances, please visit wisconsinacademy.org/ poetlaureate.

Max Garland is the author of The Word We Used for It, winner of the 2017-18 Brittingham Poetry Prize.