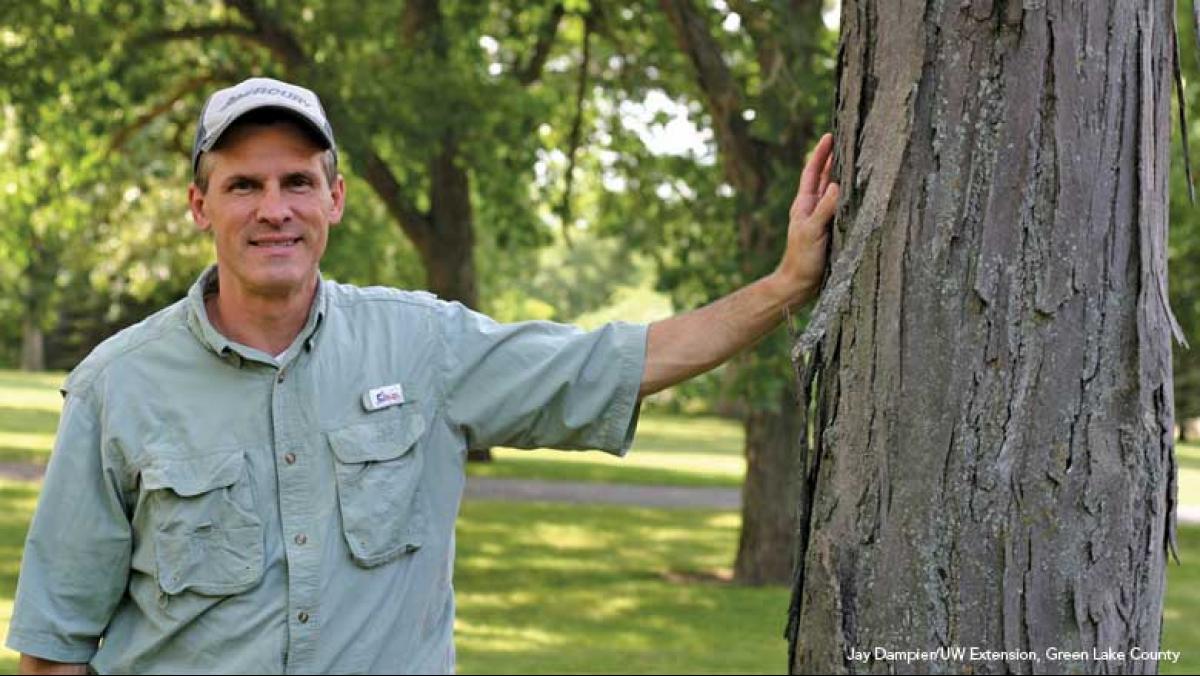 It’s a not-so-well-kept secret in Wisconsin that hickory nuts taste better when someone else shells them. Two hickory species are found in Wisconsin, the shagbark (Carya ovata), and the rarer bitternut (Carya cordiformis). With coarse bark that hangs off the tree in shaggy strips and large, pinnate leaves, a mature shagbark hickory is easy to recognize. The tree’s nuts make for superb eating. However, clad in a leathery outer husk and hard inner shell, the hickory nut meat is a treat for which one must work.

Industrious nut foragers who know where to look—along back roads, in woods shared with oak trees, on hillsides with dry soil—can easily gather enough fallen nuts (look for brown outer husks) from a single tree to yield at least a pound of meat. The amount of nuts produced by the trees, a process known as masting, varies naturally from year to year, with most nuts falling to the ground in late summer and early fall. Occasionally there is a “bumper crop” of hickory nuts, which are a great source of omega-3 fatty acids and vitamin E for wildlife, particularly squirrels, deer, and wild turkeys—as well as humans.

According to Brown County’s University of Wisconsin–Extension horticultural agent Vijai Pandian, foragers should bring a heavy sack or five-gallon pail to collect hickory nuts, which can be oily. Remove the pithy outer husk and put the light-brown nuts in buckets of water, discarding any that float. Lay the nuts in a warm area to completely dry, which usually takes a week, and then move them to a cool, dry area (such as a basement or root cellar) for up to a month. A nutcracker or Vise-Grip and a nut or dental pick are essential tools when it is time remove the meat from its tightly enfolding shell. Nut meats are ready to eat fresh from the shell or can be frozen and stored for months.

Humans in North American have been eating hickory nuts for thousands of years. Writing in his 1792 book Bartram’s Travels, William Bartram reported “ancient cultivated fields” of hickory trees in Georgia and noted that Creek Indian families would store as many as a hundred bushels of nuts every season. Another Native American practice was to toss crushed hickory nuts into boiling water to make a kind of nut milk known as pawcohiccora, the Algonquian word from which hickory is derived.

Native Americans are thought to have helped propagate and expand the range of the species, which in Wisconsin covers the lower two thirds of the state. Early European settlers planted the trees near farmhouses for summertime shade and in woodlots for autumn crops of nuts and wintertime hardwood for fuel and smoking meat. Dense, heavy, and difficult to work with, hickory wood was good for shovels, axe handles, and wagon wheels, while oak and pine were often used for home furnishings. Hickory trees take a long time to mature and produce nuts (from twenty to forty years), and this, combined with the difficulty of extracting the nut meat, made them less conducive to commercial production than related species such as the pecan, and, perhaps, has led to their decline in popularity.

Today, however, interest in the hickory tree is rebounding. And the nuts are not the only hickory product drawing attention. Hickory syrup is beginning to appear at farmers’ markets in a few areas of the state. Mike Starshak, president of the Wisconsin Hickory Association, sees a potential market in Wisconsin for both nuts and this delicious alternative to maple syrup.

Unlike maple trees, hickories are not tapped for their sap. Doing so would be harmful to the tree, which is adapted to drier soils than a maple and needs to remain unstressed in order to produce a mast of nuts. Additionally, hickory sap does not contain enough sugar to make syrup in an economical way: eighty gallons of hickory sap would be required to produce a single gallon of syrup, which is about twice the amount of sap required from a maple tree.

The organic compounds that give hickory syrup its flavor are found in the bark, which is naturally shed from the tree. Hickory syrup production begins by collecting, scrubbing, toasting, and then simmering the bark in water to extract the flavor. The flavor-infused water is then combined with cane sugar for sweetness and reduced over heat to make the syrup.

The smoky, earthy syrup has myriad applications, including as a topping for pancakes and ice cream, a glaze for roasted meats, and a sugar or honey substitute for Old Fashioneds and other cocktails. Starshak, who has been producing hickory syrup at his home near the Town of Princeton in Green County for fifteen years, says that he can hardly keep up with customer demand, especially after his Wisconsin Hickory Syrup won a blue ribbon at the Green Lake County Fair for three years in a row.

“Initially I made it for family members during the holidays. Then, in 2012, I began selling my syrup to the public at the Princeton Flea Market. Since then, demand has increased greatly, and we regularly appear at farm markets in Appleton and Milwaukee, and get many more requests that we are not able to fulfill.”

“Wisconsin is a wonderful foodie state. We also enjoy and highly value our natural areas and the wildlife and vegetation that define them,” says Starshak. As a resource, hickory can bring together some of the things Wisconsinites love, which, for Starshak, means the time is ripe for Wisconsin to “rediscover hickory’s long, notable history and restore its prominence” in our state’s culture as well as our kitchens.

STEP 1: COLLECT AND PREPARE THE BARK
Locate a shagbark hickory and collect the newly fallen bark near the base of the tree. Bark can be taken directly from the tree, but only loose pieces should be harvested so as not to harm the tree. You won’t need much to make syrup: approximately a one-gallon bucket full of bark should be enough.
Fill the bucket with enough water to cover the bark. Scrub each piece on both sides, rinsing well to remove insects and lichen. Pat the bark dry with a dishtowel.

STEP 2: BREW THE HICKORY TEA
Preheat an oven to 325°F, break the bark into six-inch pieces, and lay them on a sheet pan. Toast the bark in the oven for 20 minutes. Remove the sheet from the oven and allow the bark to cool.
Place the bark in a large pot with enough filtered water to cover it. Bring the pot to a boil and immedi-ately reduce the heat to medium. Simmer the bark for 30 minutes. Remove the pieces and continue reducing the “tea” until it reaches the desired flavor and a dark-amber color, about another 15 to 30 minutes.
Place a fine mesh strainer with a coffee filter inside over a bowl or pitcher and pour in the tea.

Max Witynski is a former editorial assistant for Wisconsin People & Ideas magazine. A Madison native and graduate of Cornell University in Ithaca, New York, Witynski is interested in ecology and science communication. In his free time, Witynski enjoys birding, cycling, and cross-country skiing.