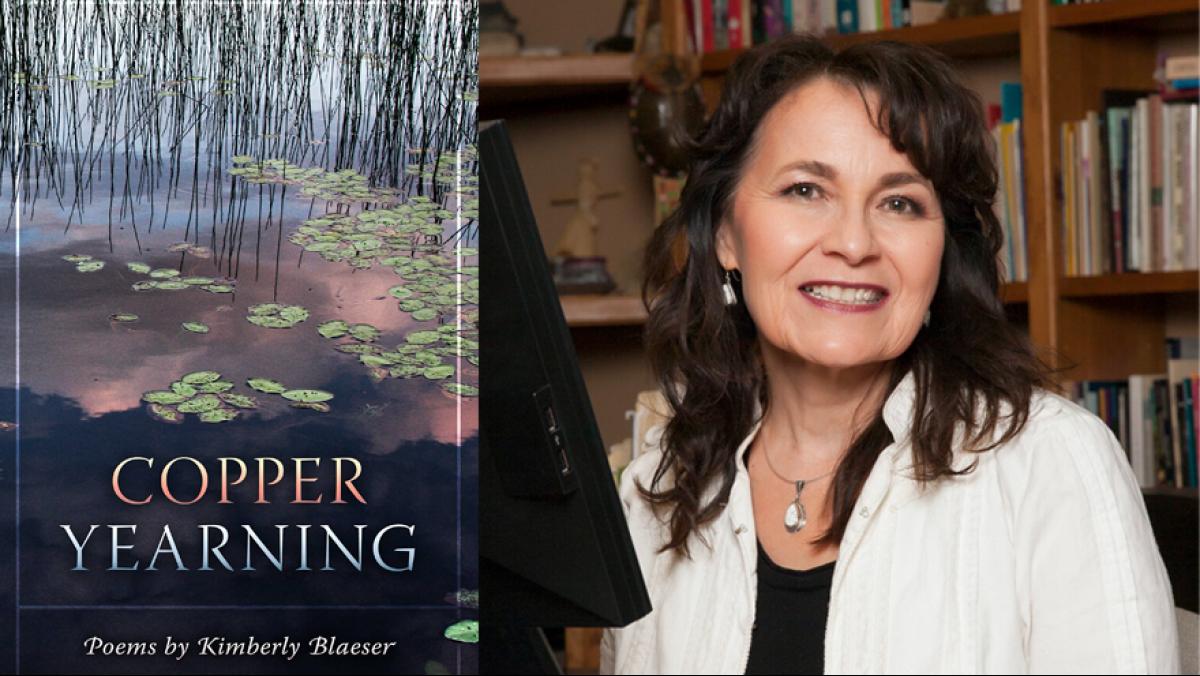 In Copper Yearning, her first book since the 2007 publication of Apprenticed to Justice (Salt Publishing), Kimberly Blaeser draws heavily from the poet’s toolbox—assonance, consonance, rhythm, color, and music—to make her poems sing across pages filled with light and clear, reflective water.

The collection is divided into thematic sections with poems of respect, as well as praise and concern, for the earth and its creatures. These poems are personal—poems of becoming in the spaces the narrator finds herself, poems of hope and resistance—as well universal. Often Blaeser reimagines the history of Native peoples or corrects misconceptions about Native culture.

What I find so compelling about this collection is Blaeser’s ability to weave cultures together using “code-shifting” between American English and the Ojibwe language, part of her ancestral heritage. In the poem, “Bawaajige” (which translates into “s/he has dreams”), you can feel the tug of identity, pulling the poet this way and that:

Whispers through my tributaries—
crane voices and stale pow-wow jokes,
Native tragedy and the “great white road.”
I won’t cliché you, betray you
with the spent hopes of language.

Another integral theme is that of the Other; how a woman becomes in the midst of two contrasting cultures. In “A Litany of Other,” the narrator addresses her doppelgänger:

My doppelgänger self,
she knows the slight weight
of a folded twenty,
knows how to smooth Andrew Jackson
bend and turn him, origami the Indian-war president
to a tucked and folded three-cornered retired flag neatness.
Then, holding him, a triangle of envy green, centered in her palm,
knows the precise pitch of lip
necessary to win each bar-stool happy-hour wager.

The stewardship of language seems the most significant theme in this book, and Blaeser grapples with big questions: Should all Americans speak the same language? How does culture define who we are, how we speak?

In the poem, “Speaking, Like Old Desire,” the narrator says:

Inwe. Mikwendan.
Gezikwendam.
Remember. Or barely. A dialect.
Can a nation re-speak itself
like a ghost dance singers conjuring the buffalo?
Who holds the ends of the broken
telegraph lines crackling between
a signal this moment a word.

By shifting between her native language and English vernacular, Blaeser adds power to her lines. She hints at the underlying motif of language itself. What do we lose when we don’t have the words? What does our culture lose when our language is gone? And, even more importantly, how do we use language as a way of becoming?

The wonder of Copper Yearning is Blaeser’s sense of storytelling and her sumptuous use of words. Readers will revel in her descriptions and feel the drumbeat of her rhythms. There is reverence and respect in her poems, places where readers—as in the opening poem—can be immersed in their own becoming: “Our bodies a libretto, / saturated, an aquifer—we speak words / from ancient water.”