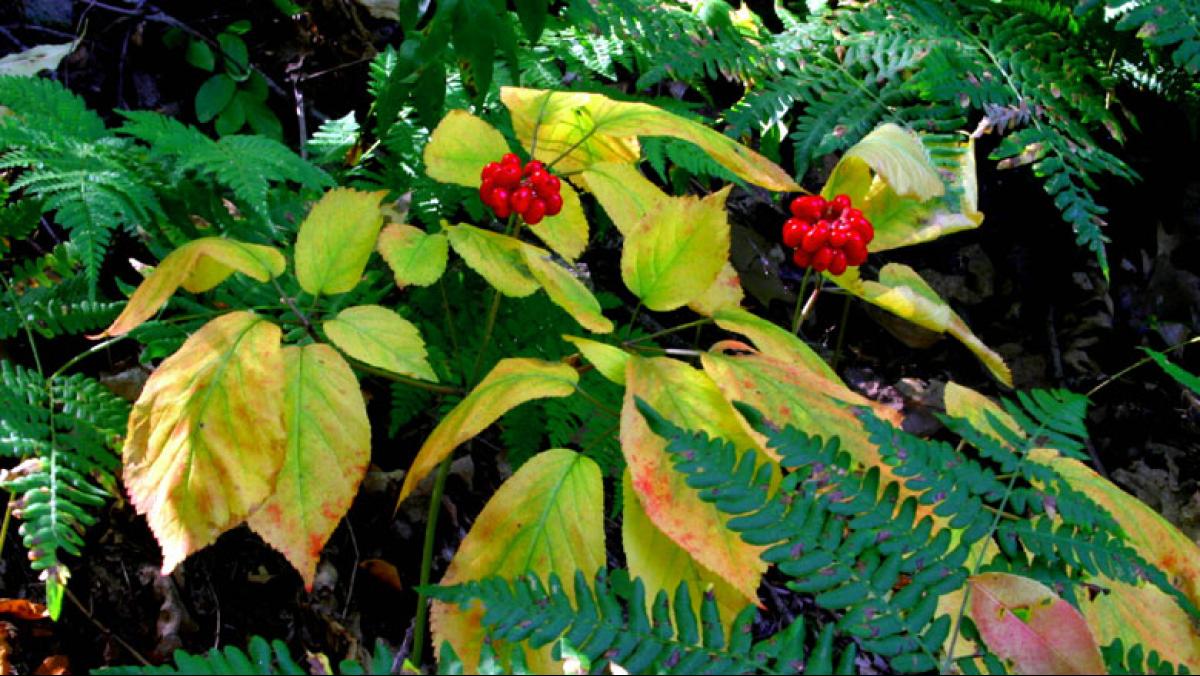 For over fifteen years, David Jorgenson* has been digging up and selling wild ginseng roots that grow on his property near the Mississippi River in Vernon County. Like many “diggers,” Jorgenson got into ginseng harvesting after a neighbor saw a few of the innocuous-looking plants on his property and asked if he could have them. Jorgenson couldn’t understand why until his neighbor pulled up the plant to reveal a spindly, parsnip-like root that he said was worth a lot of money. Jorgenson did some research on the plant at the local library and quickly realized that the roots his neighbor was harvesting were too small to sell to a reputable broker—and that his neighbor was harvesting the plants illegally.

A slow-growing perennial plant in the ivy family, wild ginseng (Panax quinquefolius) is a threatened species in Wisconsin. Here, as in nineteen other states, there are laws that regulate the harvest, sale, and purchase of wild ginseng. In Wisconsin, you need a license from the Department of Natural Resources to harvest the plant, even on your own property, and harvesting is prohibited on state-owned lands as well as national parks, forests, and wildlife refuges.

The wild ginseng harvest season in Wisconsin runs from September 1 to November 1, and is limited to mature plants that have three or more prongs with five leaflets and a flowering stalk that produces red, seed-bearing berries in the fall. As the root is the prized portion of the plant, harvesting effectively destroys it. So, as a condition of licensure, harvesters are required to plant all of the seeds in the vicinity of the harvested plant. The rules and regulations surrounding wild ginseng may seem onerous, but they are meant to ensure the survival of a species that is struggling to survive across the globe.

Ginseng root is a traditional herbal medicine, extremely popular in China, Taiwan, and Korea. The word ginseng is derived from the Chinese term jen-shen, which means “in the image of a man.” The most sought-after ginseng roots are wild roots that resemble the human form (hence the name), with thick bodies and leg-like tendrils. Often chewed or taken in pill form, the slightly bitter root is thought to raise energy levels, lower cholesterol, enhance strength, and reduce stress. Ginseng use is so prevalent in some countries that it can be found in teas, sodas, candies, soups, and even cigarettes. 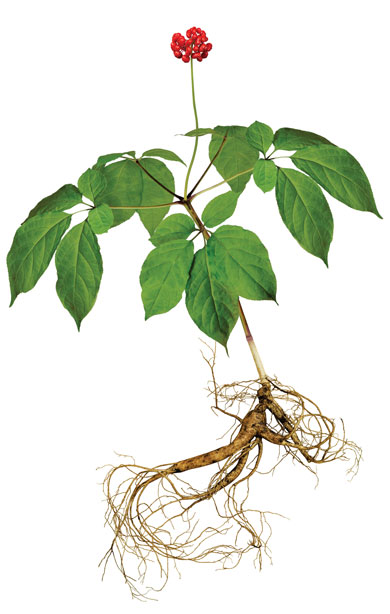 Because of East Asia’s insatiable appetite for wild ginseng, wild Asian or Korean ginseng (Panax ginseng) was harvested to near extinction over the last few centuries. While many farms in Asia (and a few in Wisconsin) now grow cultivated versions of ginseng, American wild ginseng is worth far more than these. Chinese and Korean customers will often pay between $500 and $800 per pound for dried, whole-root wild ginseng—more than ten times the price of cultivated roots. The Wisconsin Legislative Reference Bureau estimates that the state produced about $35 million worth—just over one million pounds—of cultivated ginseng in 2017 on roughly five hundred acres, mainly in Marathon County. Almost 98% of the cultivated ginseng grown in the United States comes from Wisconsin. Yet this represents only 10% of the global supply, with China, Korea, and Canada producing almost all the rest.

Exact numbers for the wild ginseng harvest are more difficult to come by, as diggers are often hobbyists who jealously guard patches of found and wild-simulated—hand-planted but not treated with chemicals or pesticides—ginseng on their properties. However, DNR wardens estimate that Wisconsin diggers pocketed close to $1,000,000 in 2015, based on 1,294 pounds (dry weight) of root sold.

Its extraordinarily high value has led to a steep decline of wild ginseng plants in heavily wooded areas of the central and eastern United States where poachers illegally harvest and sell the root on the black market. High-tech monitoring and tracking mechanisms—trail cams on ginseng patches as well as forensic dyes on, and microchips in, large roots—deployed by state and federal agencies don’t seem to deter criminals intent on cashing in on the multi- million dollar wild ginseng industry.

Yet, for all its value, we know very little about how the human body actually responds to this popular herb. Research shows that there are about sixty active compounds, called ginsenosides or panaxosides, found in wild-grown ginseng roots. Relative quantities of these compounds vary based on where the roots are grown, their ages, how they are prepared, and other factors, but some studies indicate that they have a variety of effects on the circulatory system and nervous system: some act as stimulants, others as sedatives.

“Herbal medicines are the product of dozens of chemicals that interact to create a physiological effect,” explains UW Health physician David Kiefer, a specialist in integrative medicine. “In ginseng that’s mostly triterpenoid saponins,” antioxidants that Kiefer says may help treat inflammation. “These ginsenosides … can apparently reduce the ill effects of cortisol, a chemical produced in the adrenal cortex that’s associated with stress and diabetes,” says Kiefer, adding, “though it’s not exactly clear how.”

As for wild Wisconsin ginseng, Kiefer points out that its most interesting and credible effects are on diabetes. “It seems like it can help lower blood glucose, including glucose that sometimes increases after people eat a meal,” he says.

There is not, however, a conclusive body of research on the ginseng plant and its pharmacological effects. Even though the U.S. Food and Drug Administration has categorized ginseng as a “generally recognized safe food,” it is still probably a good idea to check with a physician before taking any herbal supplement—especially if you are taking other medications.

“For me, herbal medicines including Wisconsin ginseng have a role [in good health], says Kiefer, “but I take an analytical, very science-based approach to this.” The important thing, notes Kiefer, is to consider herbal medicines in concert with the other factors affecting a patient’s health, in much the same way that we might consider nutrition.

Sustainable harvesters like Jorgenson also worry about the health of ginseng itself. While this amazing but fragile plant faces threats from poaching and over-harvesting, it, like the rest of our planet, is feeling the effects of our changing climate.

While ginseng can grow well in diverse microclimates across USDA growing zones four through eight, relatively small variations in the mean maximum summer temperature may threaten the species. According to Sara Souther, a professor at Northern Arizona University and former UW–Madison postdoc who studied thirty wild ginseng populations across six states, some can handle an increase of only three degrees Fahrenheit in annual average temperature before they begin to struggle. These localized wild ginseng populations have “specialized to the particular conditions at their site,” Souther says, noting that they are “kind of genetically cut off” from one another and cannot readily interbreed with other populations that can handle more heat.

Climate change in the upper Midwest is also expected to bring more frequent and intense rain events that will likely make things tougher on wild Wisconsin ginseng. Moisture is good, but too much stagnant moisture is bad, because the plants “have kind of a tendency toward fungal infection,” Souther says. This helps to explain why ginseng does particularly well on hillsides, where gravity helps moisture drain regularly from the soil.

According to Bob Beyfuss, a former Cornell Cooperative Extension educator and ginseng expert, wild ginseng is not an easy plant to grow. It does best on well-drained, north- or northeast-facing hillsides with lots of shade, optimally 60% to 80%. Finding wild ginseng already growing in an area is a good indicator that the conditions are right to grow more. Other indicators for suitable planting are low deer traffic (more than twenty deer per square mile causes the plants to drop out of the ecosystem), and an abundance of stinging nettle (which indicates adequate moisture) and fiddlehead fern (which grow best in calcium-rich soil). Beyfuss says that sugar maple groves are an especially suitable place for growing ginseng plants, which likely co-evolved with the trees because they provide a calcium-rich leaf cover. Too, maple leaves break down more readily than other leaves such as oak (which contain tannic acid that can prohibit growth), which means that young plants can more easily reach the surface in early spring.

During the summer, a cluster of small, white-yellow flowers appears on plants over two years old, and seeds form from fertilized flowers usually (but not always) after the plant is five years old. Seeds must undergo a season of cold to start off their eighteen-month germination period. So it’s often best to pick and plant seeds as soon as they mature in late summer to early fall (seeds found on the ground can be planted, too). New plants don’t appear until the following year and can require an additional five or more years before the roots are large enough for harvest.

The age of a ginseng plant can be determined by counting the number of stem scars on the rhizome, an underground tissue between the stem and the larger root. The rhizome can be found by removing the soil around the base of the stem. Each year of plant growth and die off adds a stem scar—a knobby ring—to the rhizome, so a five-year-old plant will have four stem scars on the rhizome. Some ginseng plants can live more than fifty years. But these are rare finds, as massive overharvesting during the 1970s destroyed much of the old-growth ginseng in the U.S.

For Jorgenson, harvest and replanting are all part of the annual ginseng cycle that keeps the species alive. He prefers to harvest later in the season, just before the first frost when the plant’s yellowing leaves make it easier to spot. “Any later and the stem falls off and you won’t be able to find the root,” he says. Jorgenson picks and plants seeds as he goes along, covering them with an inch or so of soil and fallen leaves.

Plant size doesn’t always indicate a ready-to-harvest root. “Sometimes a really big plant will have small root,” he says. In this case, Jorgenson gently re-covers the root with soil and breaks off the stem so no one else can find it. “It’s an investment,” he says. When he does find a plant that is ready for harvest, usually one that is twelve to fifteen years old, Jorgenson uses a screwdriver to carefully move the soil away from the root and tendrils. Once he removes the entire root, he places it in a bag with some others to be sold green to a licensed buyer who “lives down the river.”

While dried ginseng usually fetches a better price than fresh, Jorgenson worries that his roots will be stolen if he leaves them in the garage to dry. He mentions the recent confiscation by police of thirty pounds of illegally harvested root at a house down the road, and tells of a relative who has seen vans drop off groups of men in camouflage to scour private properties for the plant. While Jorgenson’s stories might seem far-fetched, Shawna Stringham, a warden with the Vernon County Department of Natural Resources, confirms that “in some cases landowners have been ripped off of hundreds or thousands of dollars” worth of wild ginseng.

Jorgenson says that a lot of the old-time diggers, the ones who know how to responsibly harvest the root, have been pushed out of the business by people looking to make a quick buck. In the end, it might just be the sustainable diggers like Jorgenson who save the species. “I’ve hunted and fished all of my life, and I never understood the reason that people poach or don’t follow the laws,” he says. “They are there to improve the harvest and to ensure that we have these plants for years to come so that my grandchildren can get excited about hunting for wild ginseng.”