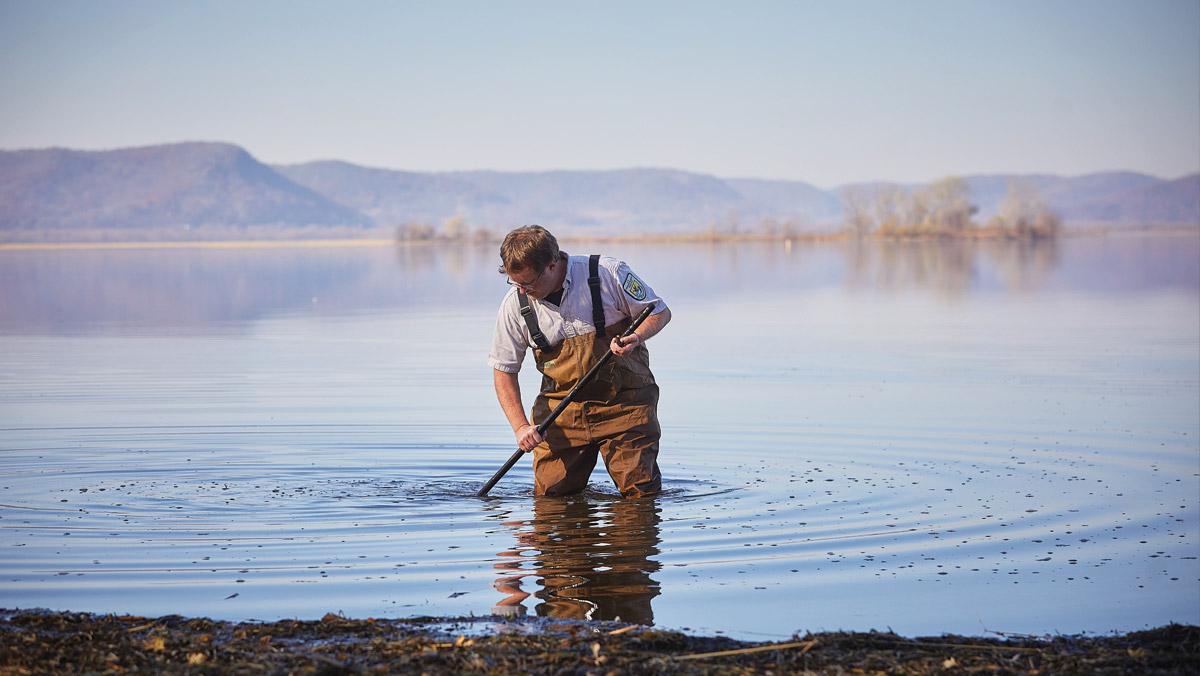 Based at the La Crosse Fish Health Center, which is part of the U.S. Fish and Wildlife Service, biologist Eric Leis investigates unexplained mussel deaths around the world. Photo by Michael Lieurance/UW–La Crosse.

On a cool, sunny morning, Eric Leis trudges through the glassy water of Lake Onalaska and stops about fifteen feet from shore. He dips a large, flat rake into the water and sweeps it along the bottom. A parasitologist and fish biologist at the La Crosse Fish Health Center, Leis studies mussel populations in the Driftless Area of Wisconsin and around the world, paying special attention to ecological threats.

“My job is like a real-life game of Clue,” says Leis, pulling a few mussels from the mud and lake weeds on his rake. “But instead of Colonel Mustard with a lead pipe, you have bacteria and changing environmental conditions. This is something everyone should care about. If mussels are dying in large numbers—and they are—we need to know why.”

Freshwater mussels come in a variety of shapes and sizes and are characterized by a brown-black ovate shell that hinges on one side and closes tightly when touched. If you pick up a mussel and its shell remains open, it is likely dead or dying, Leis explains. There are about 40 mussel species in Wisconsin and about 300 in North America, many with colorful names: pocketbooks, pigtoes, wartybacks.

The average person may not feel an affection for something called a wartyback, but perhaps they should. Mussels are keystone species, critically important to aquatic ecosystems. Mussels act as Nature’s Brita filter.

If you place a dozen or so mussels in a ten-gallon tank of muddy water, the tank will be clear in less than an hour. A single adult mussel filters up to fifteen gallons of water each day through an inhalant aperture that draws water and fine particles into its gill chambers. Algae, small zooplankton, and bacteria and viruses are digested while filtered water and undigestible particles are released through an exhalent aperture back into the environment as harmless sediment. By anchoring themselves to lake and river bottoms, mussels also fortify sediment against erosion and scouring caused by floods.

According to Leis, wherever there’s a thriving mussel population, there are going to be healthy fish, a stable ecosystem, and clean water. “There aren’t many absolutes in aquatic ecosystems, but that’s one of them,” he says. “Mussels are like the canaries in the coal mine. They tell you if something is wrong.”

Central to Leis’ current research is a mass mussel die-off in Tennessee’s Clinch River. No one knows why, but a specific species of large mussel, the pheasantshell, is dying at an alarming rate. From 2016 to 2019, the pheasantshell population on a 200-meter stretch of the Clinch River dropped from 94,000 to 14,000. In the rest of the river, it’s likely that hundreds of thousands, maybe even millions, of pheasantshells have died. Leis is part of the team trying to pinpoint the cause of these deaths in hopes of restoring the pheasantshell population and ensuring that other species of mussels avoid a similar fate.

Because the fist-sized pheasantshells are the only mussel species dying in large numbers in the Clinch River, biologists believe they can rule out pollutants and other common, indiscriminate killers as the primary threat (though they may be complicating factors). A virus, they say, is much more likely to target just one species.

The challenge, of course, is proving it.

To do this, Leis and his team are attempting to culture a densovirus, a genus of virus known to affect mussels. Since viruses tend to infect only specific cells, and since mussel cell lines have yet to be cultured and established for research purposes, they’re attempting to grow the virus in fish, snail, and mosquito cells.

“It’s kind of a guessing game to figure it out,” Leis explains. “You just pick species you think will work and see what happens.”

If they succeed in growing the virus in the lab, the team will inoculate healthy mussels with the virus and watch for a reaction—most likely gaping of the shell and non-responsiveness. Mussels inoculated with water will serve as the control group. If the mussels exposed to the virus show signs of disease, and if the team can confirm the presence of the virus in infected tissues, then they’ll have found their pheasantshell killer.

Meanwhile, Leis and his team are keeping an eye on Yokenella regensburgei, bacteria that have been linked to other mass mussel deaths. Yokenella regensburgei appears in the Clinch River in the fall, the same time pheasantshell populations typically fall off. After that, the bacteria disappear, as if they hopped in a getaway car and took off.

“Very little is known about [the bacterium], so it’s hard to say,” Leis says. “We know it’s connected in some way. We just don’t know how or why it’s associated with mussel mortality events yet.”

According to Leis, the La Crosse Fish Health Center and its partners on the investigation—UW–Madison, the U.S. Geological Survey Upper Midwest Environmental Sciences Center in La Crosse, and the U.S. Geological Survey National Wildlife Health Center in Madison—are the only labs in the world doing mussel health research with this level of analysis. The team gets questions from all over the world, most recently Spain and Nova Scotia. Last September, their research on mussels was featured in the New York Times and WNYC Studio’s Science Friday, which is broadcast by over 400 public radio stations.

The search for clues to the mussel die offs isn’t easy work. It’s riddled with complications, dead ends, and questions that only years of research can answer. But, for Leis, it stimulates the same curiosity and fascination with the natural world—especially the microscopic world—that first inspired him to become a scientist.

Growing up on a dairy farm in the Driftless Area near Cashton, Leis marveled less at the family’s cows and more at the parasites that took up residence in the cowhides. He combed the countryside for anything that crawled, slithered, or scurried. He would ask his parents to record science programs such as Nature on their VCR so he could watch them later. Leis says he even read textbooks just for fun.

Leis’ parents—Mike and Alice—say they were happy to enable their son’s obsession. One Christmas, they got him a gift that turned his spark for the sciences into a full-blown fire: a Tasco 1200X microscope kit. For Leis, putting his eye to the lens was like gazing into a new world. Leis examined anything he could get his hands on: from the intricate latticework of a snowflake to the spindly legs and gossamer wings of a house fly.

“It completely opened my eyes,” he says. “It showed me how cool things are at a microscopic level. There’s so much complexity in the world that we just can’t see.” It wasn’t until Leis attended UW–La Crosse that he realized he could turn his childhood hobbies into a lifelong career. 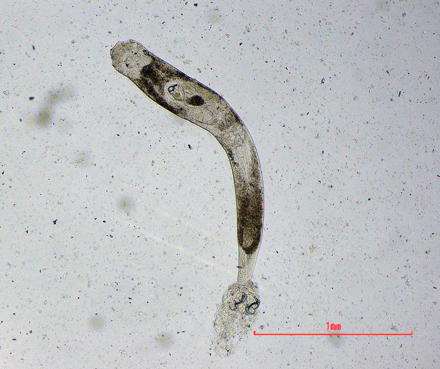 Through an aquatic animal health class taught by the late professor Dan Sutherland, Leis learned of a part-time job at the La Crosse Fish Health Center. He began working there as a student, a job that turned full time after graduation. Leis has been there ever since.

“Growing up, if I could have created my dream job, this would have been it,” he says.

A few years ago, working in the lab, Leis made a discovery that provided a unique opportunity to give back to his parents. He found a previously undiscovered parasite on the gills of a Mississippi River catfish and named it in their honor: Ligictaluridus michaelalicea, for Mike and Alice.

“All the little things they did for me—recording shows, helping me with science fair projects—made a huge difference in my life,” Leis says. “Most people don’t have the chance to name a new species after their parents. It was really neat to be able to do that.”

For Leis and his team, the most troubling aspect of the pheasantshell investigation is the lack of answers and simple solutions. Limiting stressors, such as pollutants and invasive species, is easier said than done. Once these things are in the environment, mitigating their effects is like fighting an uphill battle—but underwater. Even if a virus is killing pheasantshell mussels, it might just be the final blow, the last in a series of punches from various environmental factors.

“There are so many different possibilities—from the potential for pollutants, to habitat degradation and sedimentation, to invasive species,” Leis says. “Any of these could stress mussels, potentially making them more sensitive to the virus.”

It’s not clear if or when the pheasantshell population will reach a breaking point, but time is of the essence. While the pheasantshell die-offs have been contained, for now, to the Clinch River, there are mortality events involving other mussel species happening all over the country, with little to no explanation.

According to the Nature Conservancy in Arlington County, Virginia, 70% of mussel species in North America are extinct, endangered or otherwise imperiled—compared to 16.5% of mammals and 14.6% of birds. In the Midwest, more than half of the region’s 78 mussel species are endangered, threatened, or require special concern. This isn’t new; mussels have been under appreciated—even under attack—for centuries.

During the Industrial Revolution, factories dumped such large amounts of pollutants directly into waterways that it overwhelmed mussels, the very organisms best equipped to handle those pollutants. The development of dams was another blow. Dams restrict the movement of fish that host mussel larvae—a critical step in mussel reproduction and development.

Much like their saltwater cousin, the clam, some mussels create pearls through a natural defense mechanism. When a foreign object enters a mussel’s shell, it will sometimes coat the object in a pearly sac to reduce irritation. During the 19th and 20th centuries, mussels in the Mississippi River were overharvested for their pearls, used for jewelry, and iridescent shells that were made into buttons. Mussel harvesting and manufacturing was once a roaring industry in La Crosse, where the Wisconsin Pearl Button Company was one of the city’s biggest employers.

More recently, invasive zebra mussels have put pressure on local mussel populations, attaching themselves to the shells of native mussels and hindering their movement, feeding, and respiration. Even boaters and beachgoers have put a dent in the mussel population, quite literally.

“Occasionally, you’ll find a mussel that’s been stepped on or hit by a boat,” Leis explains. “But mussels are tough—amazingly tough. They can survive that, and they’ll actually heal.”

Climate change also has the potential to affect mussel populations—not only through events like droughts and floods, but through a disruption of mussels’ reproduction process. Even in ideal conditions, gravid mussels have a small window during which they can find the right species of fish to serve as hosts for their larvae. Phenological changes affecting mussel development or the seasonal movement of fish could tighten this window even more, stifling reproduction. Generally speaking, however, scientists have yet to draw a direct line between climate change and large-scale mussel death.

Ultimately, Leis and his team hope to clearly establish the cause, or causes, and gain a better understanding of the conditions associated with mussel mortality events. They’re also developing diagnostic assays to identify the potential pathogens, allowing for deeper investigations of future mortality events. Hopefully, with hard work and a little luck, a selection of healthy populations can be used in restoration efforts that help mussels—and the aquatic ecosystems they protect—survive and thrive into the future.

Kyle Farris is a writer, editor, and public information officer at the University of Wisconsin–La Crosse. Previously, he covered education and a variety of other topics for the La Crosse Tribune. 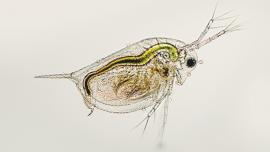 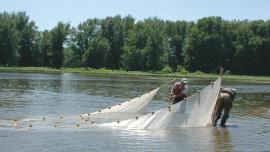 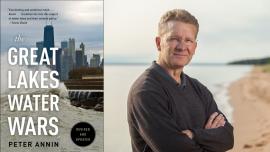 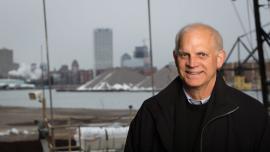