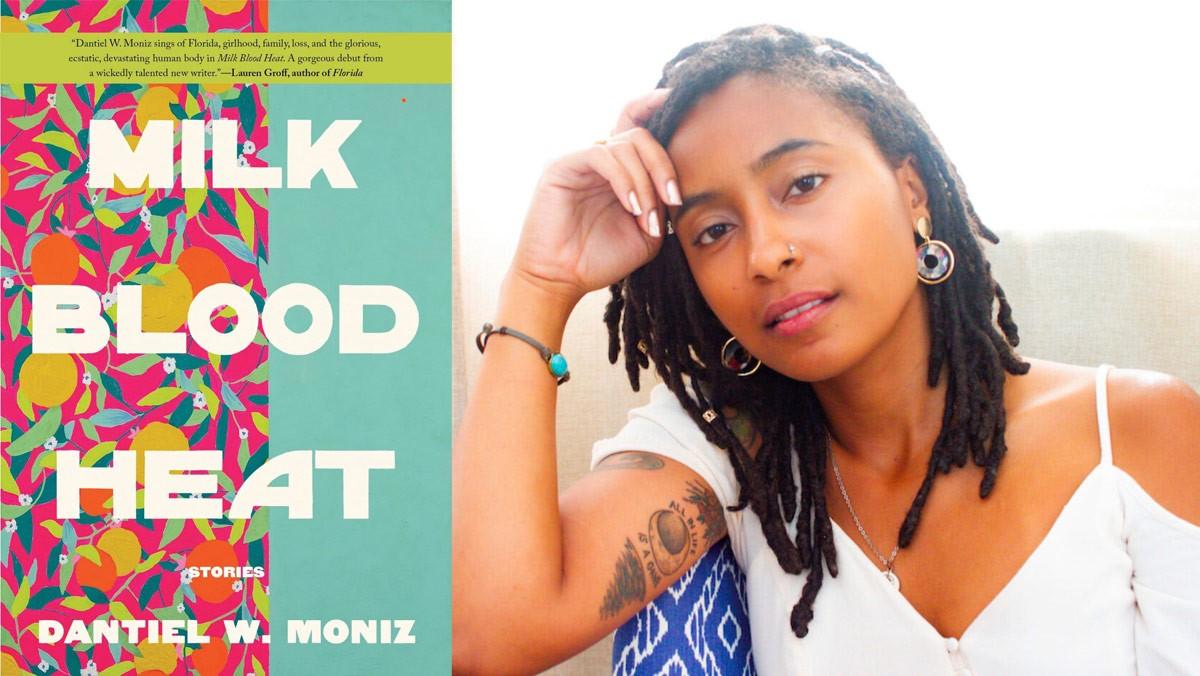 In her debut story collection Milk Blood Heat, Dantiel W. Moniz handles the concept of human connection as if it were a jewel, inspecting its every facet, glint, and shadow. Milk, blood, and heat are all conduits by which we share a part of ourselves with others. Moniz’s characters share parts of themselves through subtext, and the emotional undercurrents of these eleven stories are as resonant and complex as her prose.

Moniz was selected as a 2021 “5 Under 35 Honoree” by the National Book Foundation, and has received a Pushcart Prize, a MacDowell Fellowship, and the Alice Hoffman Prize for Fiction. A graduate of UW-Madison’s Creative Writing Program, she is now an Assistant Professor there. Though she worked on several of the stories in Milk Blood Heat during her time in the MFA program, the collection is largely set in Moniz’s hometown of Jacksonville, Florida, environments teem with life: tadpoles, water moccasins, brilliant sunsets. Moniz often marks these settings with the unnatural as well, “crickets whirring in the grass, the highway’s white noise.” In these stories the boundaries are murky, nothing is pure. An aquarium, an artificial natural environment, plays a key role in two of the stories, and in “Necessary Bodies,” a fountain with water dyed blue symbolizes the unease a recently pregnant woman feels as she considers whether to keep the baby.

The title story features two adolescent girls—one black, one white—who bond as blood sisters. A retention pond behind one girl’s backyard becomes their shared refuge from rules, the neglect and surveillance of parents, and an unspoken trauma. The small body of water embodies the girls’ grasps at agency, “a place where they—two monsterish girls—had owned the entire world.”

Like Lauren Groff in Florida and Danielle Evans in The Office of Historical Corrections, Moniz foregoes conventional linkages for a story collection such as recurring characters or plot events. Instead, the world of Milk Blood Heat is densely interwoven on the macro level of theme and the micro level of image.

A motif or metaphor in one story will reappear in another, twisting through the stories like a snake in St. Augustine grass. In “Milk Blood Heat,” the protagonist describes her friend’s mom in mourning: “her mother’s whole body seemed concave, as if consuming itself.” This simile resurfaces at the end of “Feast” in a visit to an aquarium, where the protagonist goes to escape her day-to-day life—depression unrelenting in the eight months since her miscarriage. In a corner of tank, she finds an octopus eating its own damaged limb. The act may seem self-destructive and irrational, but she instinctively recognizes the healing, “a truth behind it, muscled and gleaming.”

With images like these, Moniz plays within the literary traditions of fabulism and Southern Gothic, but her deft, jewel-like stories flash with a singular, haunting style all her own.

Bella Bravo earned their MFA in fiction at the University of Wisconsin-Madison. They live in Seattle and are at work on their first novel.