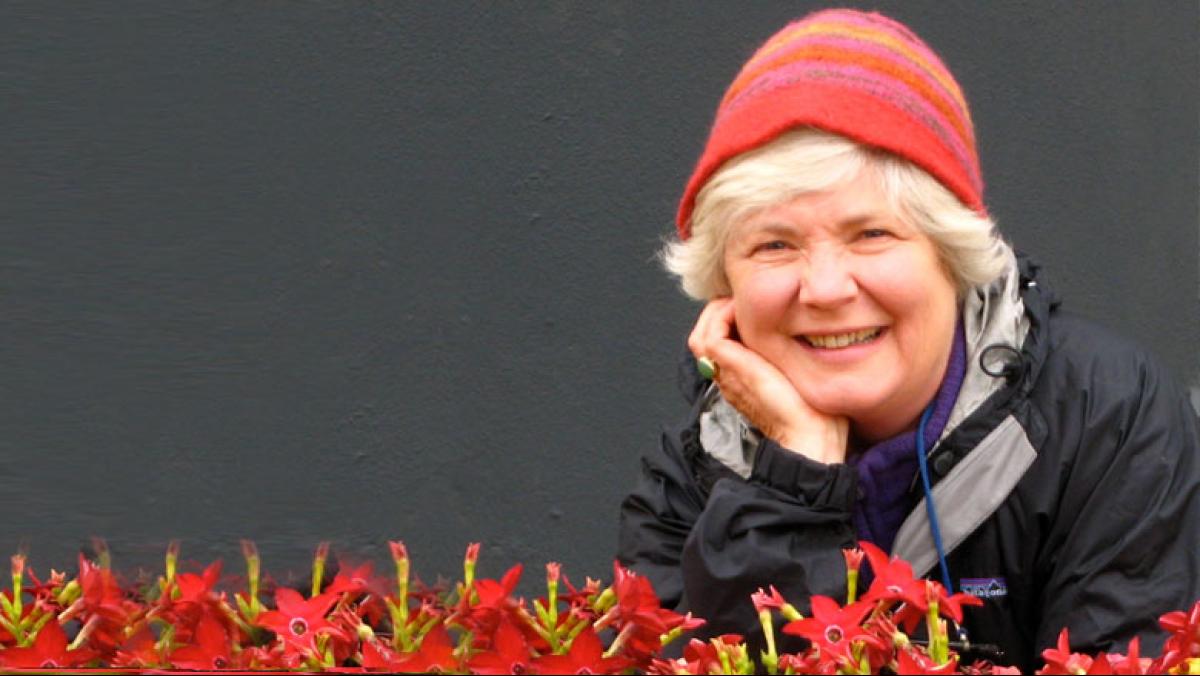 Where do poems come from? Where do dreams come from, and artists’ ideas, and mathematical proofs, and inventors’ projects? The creative process has multiple sources, and often a protracted timeline, including times when it seems as if you’re doing nothing at all.

“Incubation” is the label for this part of the process. And part of being creative is trusting that something inside of you is keeping the project alive. Somewhere, there’s a solution, image, idea, phrase, or feeling gestating.

Different poets will have different sources for creativity, and, for many of us, poems often originate in place.

Mary Oliver has her Blackwater Pond that she visited so many mornings, slipping into the lives of the creatures and the sights there. In my daily life I have the path to Picnic Point near the UW–Madison campus and the prairies, rivers, and marshes of Wisconsin. And every winter I return to the Canadian Rocky Mountains of Banff in search of poems.

If place is a trusted source, wild places make the prospect of finding a poem even more variable—it can take ten years to stumble on all the elements needed; or the poem can arrive even as you run along the Picnic Point path.

Or you will remember a landscape.

Sometimes memory isn’t enough and you need to return to a place. Two of my poems about the same piece of land in Wisconsin’s Marquette County, written thirty years apart, visit and revisit a hillside remnant prairie and oak woods about two miles from naturalist John Muir’s boyhood home, a place where my first husband and our young children camped on weekends.

The first poem I carried with me for ten years in my pocket notebook as nothing more than the last two lines of a title. I walked the hill each summer, thinking that John Muir had lived nearby.

But I knew I needed more than this vague thought for a poem.

His autobiography of growing up there, The Story of My Boyhood and Youth (1913), gave me a sense of the young Muir’s hard life, and the sensation that I might be crossing a path he once walked looking for bees.

I set myself to reading more books about Muir’s life and even paid a visit to the Wisconsin Historical Society in search of a device he created in 1862 while a student at the University of Wisconsin.

In his autobiography, Muir describes the “clockwork desk” he constructed in his dorm room to help with his studies. “I invented a desk in which the books I had to study were arranged in order at the beginning of each term,” he writes,

I also made a bed which set me on my feet every morning at the hour determined on, and in dark winter mornings just as the bed set me on the floor it lighted a lamp. Then, after the minutes allowed for dressing had elapsed, a click was heard and the first book to be studied was pushed up from a rack below the top of the desk, thrown open, and allowed to remain there the number of minutes required. Then the machinery closed the book and allowed it to drop back into its stall, then moved the rack forward and threw up the next in order, and so on, all the day being divided according to the times of recitation, and time required and allotted to each study.

Only when I had time for further reading about Muir’s life, and actually saw his incredible clockwork desk, did the poem come together and the first line of its title appear:

John Muir
walked across this hill
when he was a boy.
Bones aching
from digging out oak grubs
or hollowing out the cramped
damp well
fifty, seventy, ninety
feet down
day after day
until the neighbor noticed
that no more buckets
were coming up
and hauled him out
just before the oxygen gave out.
Head aching
from his father’s grim message:
You’re no good boy,
no good unless you work;
the only salvation
from our evil nature
is prayer and work;
reading and education
are the devil’s temptation.
Eyes aching
from reading at three a.m.,
catapulted out of bed
and sleep
by a contraption
of wooden scraps
to the wooden desk
that turned the pages
like clockwork,
twenty minutes a book.
It’s still on display
At the Historical Society.
Years later,
heart aching,
he walked away
from the education
that wasn’t the answer;
walked away from a Yosemite sawmill
and a woman who wasn’t his;
walked home to Wisconsin once
when he imagined
his mother dying.
But walked
most of his life
toward the High Sierras,
Yosemite’s upper reaches,
the Grand Canyon,
toward the views that stunned
the heart into forgiveness
or forgetfulness
and peace.
Talked Teddy Roosevelt
into leaving
all those views
to the nation.
His own salvation
foreshadowed
in the aching boy
seeking some ease,
watching and walking
through the Marquette County trees,
the light
shining in benediction
through the leaves.

I published this poem for the first time in the spring 1984 issue of Wisconsin Academy Review, well before the magazine became the Wisconsin People & Ideas we know today. Thirty years after publication I thought back to the poem and the same sandy hill in Marquette County. Children had grown up, that marriage had ended, and we had, with a wrench, sold the land after many years of no longer visiting. But in memory, our time there—fifteen years of camping in the same place—is clear; and I put some of it here:

On the forty acres of sandy hill, century-aged,
remnant-sown, John Muir’s boyhood footprints
crossed the sand blow, following bees, or so
I like to think; though it might have been only
the crest of the hill he crossed, through the oak,
or the turkeyfoot and little bluestem ranks
that wave there now. Small orchids, earthstars,
goldenrod and blazing star were found in the sand
blow, and under our shelter at the top of the hill
our own sons dug in the dirt, hammered nails,
grew to build their own skateboard ramp and hang
in the sky like the hawk’s brief survey. And here’s
the path I wandered with my field guide, learning
names—ten new species flowering every week—
here’s the place the hairy puccoon bloomed, there
the pussytoe patch, the hawkweed acres;
and here’s the place we put the bench, sightline
into Wisconsin thunderstorms, moving opposite
to lower clouds, and here’s the east toward which
the bluestems bowed; its coordinates include
the firepit—marked “kitchen,” on our map, the path
through the woods to the three-sided outhouse,
the other path to back bedroom—Adirondack
shelter where we slept to the insistent voices
of the whippoorwills, the bark of fox and coyote.
Mark the fox—it had a den in the woods. And mark
the whippoorwills—we saw one once on a limb,
its legs so weak you could scarcely see them;
and mark the trail where the ladies-slippers bloomed,
past the outhouse. Mark the locust woods to the west,
oak and hickory woods to north; question mark
for where the owl lived, nightly questioning us. Here
we found the webs of the writing and funnel
spiders, and here the walking-stick. Say that this
was the map of our days. Say that we too walked
here once, if the barred owl asks you.

Of course, not all poems take decades to accumulate their component materials. And, in my experience, creativity in writing poetry requires a kind of double vision: a strong intention coupled with a receptiveness to not knowing. Carrying a notebook and pencil. Even a title, an equation, a memory. Being present in loved places. Open to what comes. You too may find lines coming to you, walking our Wisconsin places—wild and otherwise.

From the time poet Robin Chapman was eight she has written poetry, returning to it in 1980 in Wisconsin with the commitment to meet with her writing groups weekly, including in her poems topics of daily life, nature, child language, and science.