The Illuminating Poetry of Karla Huston 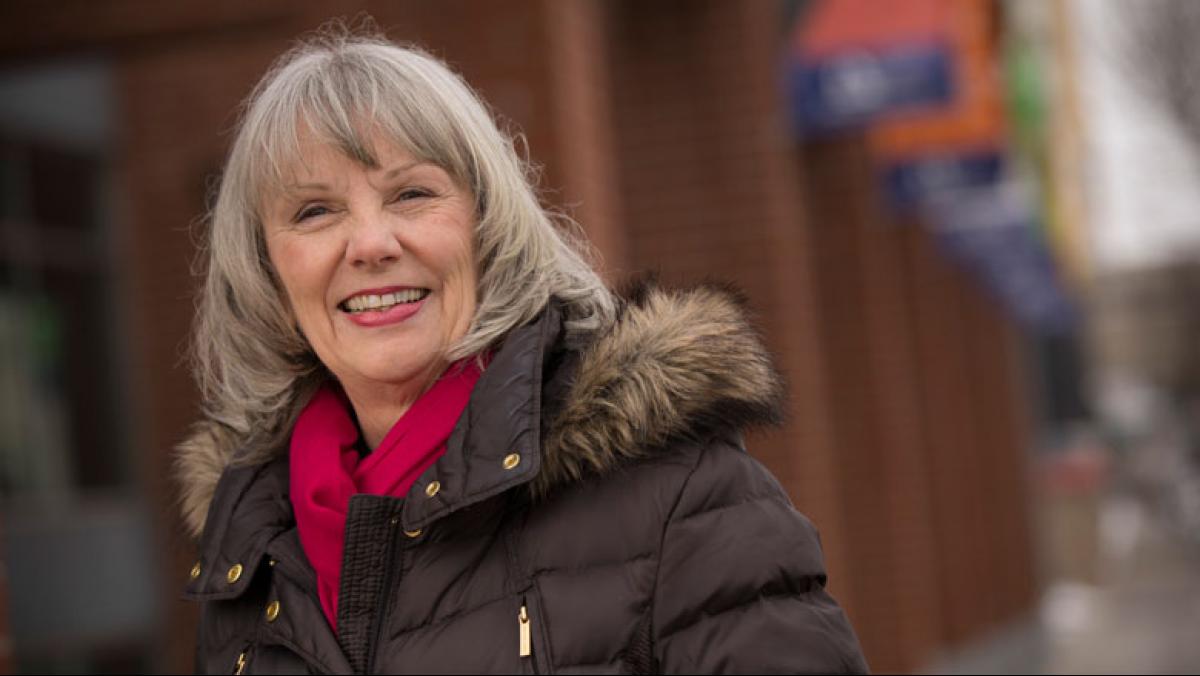 On a late November afternoon at the Hoffman Memory Care Resource Center in Kaukauna, Karla Huston witnessed the power of poetry at work. She was leading her first program at a Memory Café—a gathering space for people experiencing memory loss—and trying to figure out how to get the attendees engaged. “I read a couple of my poems that deal with memory,” Huston recalls, “and pretty soon, everybody was bubbling over with stories about when they were young: dance halls and proposals and first dates.”

The enthusiastic response from the Memory Café participants demonstrated to Huston how “poetry has the ability to tap into memory and those experiences we share as humans.” It also gave her a renewed sense of purpose in sharing her poetry with others.

As the new Wisconsin Poet Laureate for 2017–2018, Huston plans to nurture the growth of poetry reading and poetry writing among elderly and memory-impaired people across the state through Memory Cafés like the one she lead in Kaukauna. The national Memory Café movement brings together people who suffer from mild memory loss and dementia, along with their caregivers, to celebrate and collaborate in creativity and storytelling.

During her time as Wisconsin Poet Laureate, Huston will travel across the state facilitating Memory Café events and working to build community around the restorative potential of poetry and the arts. “Poetry can make valuable connections with those who suffer from memory loss, an often ignored population. That is a wonderful gift, and I’m happy to give it.”

Huston found her voice as a poet in her early forties. Her first formative encounter with poetry occurred in the early 1990s at the University of Wisconsin−Oshkosh, where she’d gone back to school to earn a bachelor’s degree in the quest to become a high school English teacher. She remembers asking her professor at the time, Doug Flaherty, about the poems of Emily Dickinson. “I didn’t understand how poems were written, how poems happened, how poets worked,” she remembers. “I asked if poets wrote with intention or whether poems rolled off their pens like some sort of magic. I was curious, but wasn’t sure how to put into words what I wanted to know.”

In 1994, with a BS in Education under her belt, Huston was hired as an English teacher at Neenah High School. While her students became her first priority, she still wanted to know more about poetry. So Huston signed up for her first creative writing class through the Continuing Education department at UW−Fox Valley. Her teacher was Neenah-based writer and poet Laurel Mills, who has since become a good friend.

“I’d never written a poem before [that class],” Huston says, “but I tried it. I agonized over the best word—sound and syllable. I was entranced. It was one of my best writing experiences. I’d written my first poem, and I was hooked.” She signed up for more poetry classes in 1996, and, though it was a struggle to balance her day job as a teacher with her graduate classes, she eventually earned her Master’s in English and Creative Writing from UW−Oshkosh.

In those early workshops, Huston imagined herself as a fiction writer, rather than a poet. Having read more fiction, she initially felt more comfortable writing in that genre (some of her short stories went on to win awards, including the Wisconsin Writer’s Association 1998 Jade Ring Award for “Picture This”). But, she says, “as hard as I worked on a story, I found that I didn’t enjoy it as much as telling that story in a narrative poem.”

The lush language and almost musical composition found in Huston’s poems make evident the pleasure she derives from playing with words. “What I loved about poetry when I began writing it—and what I love about it now—is the synergy of word and sense,” she says. “I love searching for that right word, the one that is both meaning and melody.”

Her poetry is deeply influenced by memories of her mother and grandmother, who lived just down the street from where Huston was raised in West Salem, Wisconsin. In fact, Huston’s 2013 collection, A Theory of Lipstick, which won an Outstanding Achievement Award from the Wisconsin Library Association, is dedicated to her mother. In the collection’s ultimate poem, Huston writes: “My mother wore Love That Red / and when she put it on, I knew / she was going farther / than the clothesline / or the edge of our corner lot.”

Both her mother and grandmother were homemakers, and their domestic labors made an impression on Huston. “If you want to know about my early feminist leanings,” she says, “I always thought it was very odd that [Sunday] seemed to be a day of rest for everybody except for the women who were still expected to cook.”

Huston’s poetry reflects her observations of women whose voices were often subsumed under their social and domestic responsibilities. “I grew up in a generation of women who were defined by the men they married,” she says. “They were Mrs. Someone, homemaker, wife, and mother. I don’t mean to be disrespectful of women from the Fifties (and earlier generations, too), whose lives were made full and satisfied by the roles of mother, wife, and homemaker. But I am also a child of the Sixties, where women could imagine something different, something more—a career maybe, an identity fully their own.”

The interrogation of traditional gender roles is a recurring theme throughout Huston’s wide body of work, which includes one collection and eight chapbooks. Some poems are written about women literally defined by their husbands—“The Dog-Catcher’s Wife” and “The Plastic Surgeon’s Wife”—while others, like “Mona Lisa Imagines,” assume the thoughts of a woman whose inner life is inaccessible. By writing poems from the perspectives of these characters, Huston provides them with both agency and individuality.

She admits that writing through the voices of other characters allows her to take risks she might not take if she were writing in her own voice. “I love to ‘wear the mask’ and create poems in persona,” she says. “In Greek plays, an actor could play many parts by simply changing masks. It’s adopting a whole new way of speaking in a voice not exactly your own.”

In many instances, Huston tries on the masks of women in popular culture: from Gina Lollobrigida (a 1950s Italian starlet and sex symbol) to Rapunzel. In one poem, a female narrator wryly compares herself to an aging Judy Garland—“too old / for the part, but blue-eyed and braided, / my pinafore more than a little tight”—underscoring the societal pressures placed on women to look and act youthful.

Huston’s poems about Wonderbras, control top pantyhose, and even lipstick detail the many ways in which women’s bodies are concealed and confined. But the poems are often empowering, too. Many depict women engaged in acts of liberation or defiance, allowing their bodies to be seen on their own terms and their voices to be heard.

“Men have always written about women’s bodies,” Huston says, “and I feel that women have the right to reclaim what is theirs—and to be able to speak about it without criticism, and in the way that they choose to.” Poets Kim Addonizio and Dorianne Laux have served as Huston’s inspiration on this front. “What Do Women Want?” is one of her favorite Addonizio poems; it features an empowering red dress that the narrator wants to wear—and eventually be buried in. It’s the type of poem, Huston says, that makes you want to stand up and shake your fist. “Those kinds of women writers [like Addonizio and Laux] really convinced me that I could write whatever I chose to write,” she says. “And they’re absolutely fine poets in their own right, never mind the subject matter. They’re masters of the craft.”

Over the years, Huston has begun to feel more confident in her own identity as a poet. “It took a long time,” she admits. “I’d seen myself as someone who wrote poetry, but not as a poet. I finally gave in to it when I immersed myself in poetry books and like-minded friends who also wrote poems.”

Huston found fellow poets who challenged and encouraged her newfound passion through the Wisconsin Fellowship of Poets. “Writing is a solitary act,” Huston says, “so finding like-minded writers who struggle and succeed is essential to the process.”

Along with Laurel Mills and Doug Flaherty, she cites Wisconsin’s first Poet Laureate, Ellen Kort, as an inspiration. “Ellen told to me not be afraid to write badly,” she remembers. “I’ve learned that it is in the act of writing that we learn to write. No one learns to do anything well without practice—and failure and more practice.”

Huston also keeps herself connected to the larger poetry world by writing reviews for Library Journal (a job she’s now held for over ten years) and Wisconsin People & Ideas. She claims that being a reviewer has changed her relationship with poetry. “As a writer,” Huston says, “you’re asked to attend to a poem in a different way than as a reader. To see what a poet has done with language and line and the way meaning is presented is illuminating.” And since she often doesn’t get to choose which poetry books she reviews, she’s exposed to a wide range of styles and forms—much wider than what she might seek out on her own.

After years of dedication to the craft, Huston has firmly established herself as a working poet in Wisconsin’s writing community. She serves as vice president and membership coordinator at The Mill: A Place for Writers in Appleton, in addition to serving on the board of the Council for Wisconsin Writers. Huston regularly speaks at book festivals, writing conferences, and other literary events about the public value of poetry and the arts. And she has been teaching poetry workshops at The Mill since it was founded in 2011.

As someone who has lived almost her entire life in the state, Huston doesn’t hesitate to refer to herself as a Wisconsin writer. “There is a certain value system that Wisconsinites hold close,” she says. “That work ethic, the value of an education, the importance of modest things. My parents modeled these.” Huston’s appreciation for modesty can be discerned in her observational poems—about things like lake flies, falling leaves, and the companionship of dogs. And these poems are clearly rooted in Huston’s memories of her family and time spent in Wisconsin.

Huston is eager to promote the reading and writing of poetry during her two years as Wisconsin Poet Laureate. “It goes without saying that I am looking forward to meeting poets and lovers of poetry and those who aren’t too sure about this poetry thing, all across the state,” she says.

It’s both humbling and motivating for Huston to remember that there was a time when she had plenty of questions about poetry herself. “Now I know that writing poems is glorious and often fraught with frustration and hard work,” she says, “but I believe there is still magic involved.”