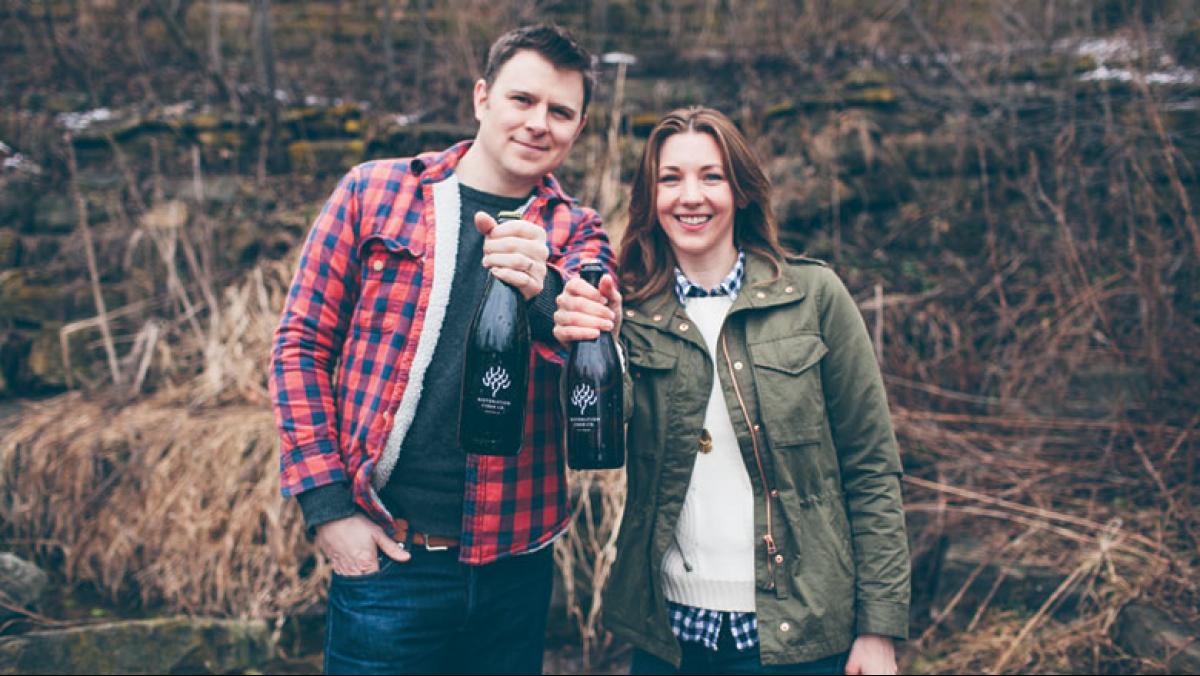 In a state known for cheese and beer, a new product with similarly deep roots is on the rise: hard cider. With more than a dozen small producers popping up across the state, Wisconsin is joining a growing movement to revive this once-popular beverage.

Hard cider gets its alcohol punch from the yeast-fueled fermentation of sugars (mainly fructose, glucose, and sucrose) found in fresh apple cider. Sugar levels vary greatly between varieties, and tarter apples with high levels of acidic tannins are often used to add complex flavors to ciders. Cane sugar or honey can be added to increase the level of fermentation and alcohol production, as well as to balance out tart or bitter flavors.

Europeans have been making cider for centuries, and dedicated cider orchards are commonplace throughout the continent. The first ciders are thought to have been brought to America on the Mayflower, and many dedicated hard cider orchards once dotted the landscape. Because the fermentation process kills many kinds of harmful bacteria, cider was an extremely common beverage in the days before refrigeration. For early Americans, cider was often safer to drink than water. (There was even a less alcoholic version, called ciderkin, for children to drink.)

An influx of immigrants with a taste for beer and the subsequent rise of the Temperance Movement contributed to the decline of hard cider in the late 19th and early 20th centuries. Many of the cider apple trees were replaced with sweeter eating apples to help farmers make ends meet. To this day, the apple industry in the United States is dominated by eating apples. According to the U.S. Apple Association, fifteen popular varieties—familiar names such as Granny Smith, Honeycrisp, and McIntosh—account for almost 90% of all U.S. apple sales.

Ela Orchard in the small town of Rochester has been growing these and other eating apples since the 1930s. Located in southeast Wisconsin in Racine County, the orchard is the quintessential family-run farm. John Ela, a cousin of the current orchard owners and the man behind Ela Cider Company, has fond childhood memories of picking apples and playing in the hay barn. Ela says his mom had the idea to venture into hard cider after decades of producing fresh cider.

So, in 2014 Ela and his parents formed a branch of the orchard called Ela Cider Company. While the trio had no formal brewing experience, other than a couple of batches of home-brewed beer, they had plenty of apples and a willingness to experiment.

Working with fermentation expert Paul Asper of Restoration Cider Company, the Elas developed their first hard cider, Stone Silo. Pressed from a blend of cultivars like Jonagold, Golden Russet, Golden Delicious, Stayman Winesap, Ida Red, and McIntosh, Stone Silo is an off-dry, lightly carbonated cider with fresh fruit flavor and intriguing depth. Ela says that adding a small amount of fresh cider when the fermentation process is complete is the key to delivering just a hint of sweet apple flavor while countering the natural acidity that comes with fermentation.

The second cider that Ela Cider Company developed, Barn Cat, is totally dry, rather tart, and a “little funkier” than Stone Silo, according to Ela. In fact, it doesn’t taste at all like apple. Ela notes that people who are familiar with traditional European ciders are very drawn to Barn Cat.

Ela prefers older varieties of apples such as Golden Russet—named for its slightly leathery, brownish-green skin—which has a zippy and aromatic flavor. The Jonathan apple, a sweet-sharp variety that dates back to the mid-1800s, is a staple in Ela hard ciders. According to Ela, Gala, Red Delicious, Honeycrisp, and other eating apples don’t have much character and should be used sparingly in cider production. Still, the cider operation uses some cast-offs from the thirty or so eating varieties the orchard grows. 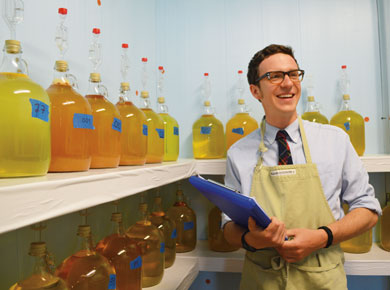 Ela’s apples are picked at the peak of ripeness, usually in October. Two weeks in mid-November are then dedicated to mashing the apples and pressing the mash through cheesecloth to separate the pulp from the juice. The juice is then put in five-gallon pails and frozen until it’s time to take it to Restoration Cider Company in Madison so that Ela can collaborate with Paul Asper on the fermentation process.

Asper and wife Lissa Koop produce hard cider under the Restoration Cider label. Asper notes that he wasn’t much of a cider drinker until he and Koop went to Spain and fell in love with traditional European cider. When they came back to America and couldn’t find any European-style ciders, Asper started making his own in their basement. “Batches were turning out pretty good, so we thought we could go into business and give people a real product made with local apples,” says Asper.

Hoping to expose more people to European-style ciders, in 2013 the two founded Restoration Cider. Asper and Koop run all aspects of the business, from marketing to product development, while balancing other professional careers with raising two daughters.

Using traditional and organic heirloom apples from orchards in the Driftless Region of Wisconsin and the Upper Peninsula of Michigan, Asper makes three kinds of cider. Sugar River is a classic apple cider, made with Wisconsin apples. The cider comes out semi-dry, with just a hint of juice added back in after fermentation to provide a subtle sweetness and to give it a thicker consistency.

Asper’s Primrose Bitter Pear is made with pears imported from Normandy. Grown for making a champagne-like beverage, these pears have a very high tannin content, making the cider a little more complex, with an amber color and a semi-dry feel.

The fermentation process at Restoration Cider begins with huge, antique dairy tanks full of fresh cider. While there are hundreds of yeasts to choose from, Asper adds white wine or champagne yeast because he feels these give the cleanest flavors and really let the fruit shine through.

“It’s really hard to maintain the clear flavors of ciders,” says Asper. “Apple juice is not a very nutritious substance. It doesn’t have protein and nitrogen and things that yeast like to reproduce and grow, so it can be really hard to make cider in general and keep it really clean and fruity without getting any off flavors.”

As the yeast consumes the sugar from the apple juice, carbon dioxide and organic acids are naturally produced. After about two weeks of keeping the cider at a stable temperature and stirring constantly “to keep the yeast floating around and happy in there,” the fermentation process is complete.

When the yeast starts to run out of sugar, it’s important to remove it immediately. The cider is filtered to remove the yeast, then put into another tank, chilled, and carbonated. According to Asper, the carbonation gets those apple aromas into your nostrils to produce a nice, fruit-forward drink.

The finished product is bottled or placed in kegs to be sent off to various restaurants and stores. From start to finish, the process takes about a month.

Just as wine has a distinct terroir, Ela says there is definitely a regional aspect to cider as well, where the cider takes on the characteristics of the area in which the apples are grown. Ela uses apples only from Ela Orchard, but says that a cider made in a similar way with apples from a different orchard will have a totally different flavor profile.

Both Ela and Asper agree that hard cider is back in a big way. Asper thinks people are growing tired of the really sweet, soda pop ciders that have been in production for a while and that there is a growing interest in a lighter alternative to India pale ales and porters. Ela notes that the gluten-free movement has also added momentum to the rise of hard cider.

“I think it’s a really cool product because Wisconsin grows great apples,” says Ela. “I think we’re only seeing the tip of the iceberg right now as far as the potential for what cider can be. … As we get different apples and different methods, you’ll start seeing a lot of really unique American cider.”