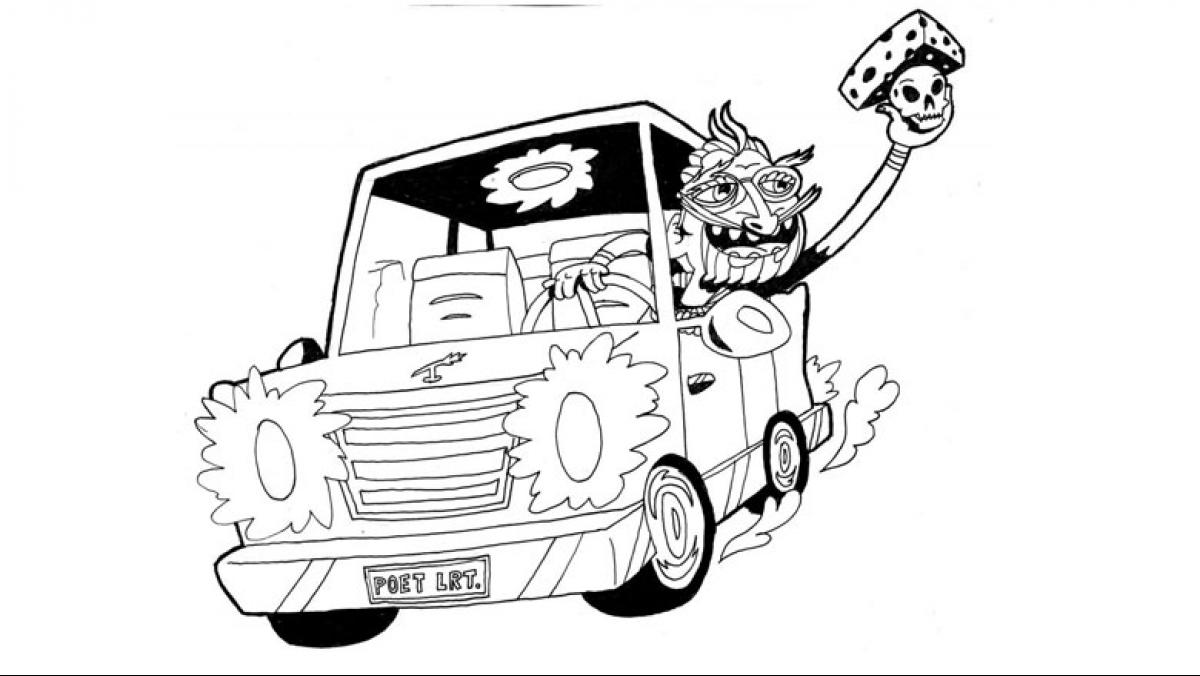 A year ago I was doing what any sane adult does on a sub-zero night in Eau Claire: sharing a plate of fried cheese curds and ordering a second round at Houligan’s. When my cell phone went into spasms for the fourth time, I stepped over to the coat rack, and among parkas, scarves, and overcoats, learned I’d been selected Poet Laureate of Wisconsin.

Now, 10,804 miles later, I’ll share some observations about the state of poetry and the arts in Wisconsin. First, a complaint: They don’t actually give you a laurel wreath to wear, though I suspect those aren’t very warm, and frankly, a set of tires would be more useful. And as has been often noted, state arts funding was tossed merrily under the bus in the governor’s 2011 budget. And though the tread marks remain, I’ll crawl out from under the wheels long enough for some observations.

Of course, writers, artists, and supporters of art continue to nurture creativity in our state. Most do it for little or no monetary gain. They do it because it’s a vital part of keeping humanity afloat in a flood of sales pitch, distraction, sound bite, and political spin. They do it because art is inherent in the species, an ancient means of expressing, with compassion, honesty, and beauty, the thunderous complexity of the human heart.

For instance, the ten-year old girl reading her prize poem in Delafield, middle-school slam poets ranting beautifully in Sheboygan, elders reading poems of loss and renewal in Oconomowoc. There were recitations in Milwaukee City Hall, songs by a mother/daughter duo among fireflies, bats, and bat-sized mosquitoes in Egg Harbor, a soprano singing arias from a flatbed truck outside Reedsburg.

I read and listened to poems in the birthplace of the electric guitar, the hamburger, the Republican Party, and the hodag. Just as I’d suspected—it’s hard to find people who don’t have poetry tucked into their hearts and minds, whether in the form of lines on a page, hymns, sermons, scripture, song lyrics, journals, daydreams. Poetry may simply manifest itself in the realization that we feel more than we can easily say, and amount to something richer than text messages or emoticons can fully express.

There were glitches, for instance, getting lost following the wrong car to my lodging in the Baraboo hills, and finally around midnight being invited in by the surprised woman whose car I’d mistakenly followed, who called into the next room to her husband, “Honey, if you’re still watching TV in your underwear, put on some pants. I’ve got the Poet Laureate of Wisconsin here. He’s lost.”

Occasionally, returning home, I found myself struck by a couple of things about my own town, one of them a little sad, the other supremely hopeful.

The sad one? It gradually became clear that Eau Claire, bursting with talent and creativity, nevertheless lags behind other places in utilizing its city center, fulfilling its natural role as a cultural destination along the 267-mile stretch between Madison and the Twin Cities. We have writers and artists galore, some famous and some who should be, and hosts of folks who donate their talent, a kind of artistic free lunch for our community, or whatever winds up in the tip jar at night’s end. We have business owners working day and night to make this a better place. But we do lack something found in almost all thriving economic and cultural centers.

The hopeful part? People on all sides of our famously fractious political spectrum are coming together to make something amazing. It seems fitting, poetic justice, you might say, that the very rivers that built this town now seem to be inspiring its renewal. Once our Confluence Project is complete we’ll not only have closed the gap between this valley and other parts of the state in terms of cultural and commercial offerings, but frankly, we’ll have surpassed most of them.

Across Wisconsin we know the “creative economy” brings jobs, visitors, tax revenues, helps attract and keep the best and brightest. I have to confess, however, that’s not why art matters to me. It matters because we—children, adults, elders—deserve more than isolated evenings of TV-induced trance, hours squinting into iPhones, and Xboxes out the wazoo. We deserve places to go, performances that enrich and expand our capacity for wonder, remind us of the power of imagination inherent in each of us.

The more I listened and talked to Wisconsinites about poetry and art this past year, the more I came to realize that while a balanced budget is good, a balanced life is a better measure of wealth.

Making a living is important, but making life worth living is an art.

Part of a balanced understanding of prosperity includes the nurturing of human imagination in service of community. Poetry and the other arts are everybody’s business, the ancient means by which we connect our individual lives with the community, as well as the natural world, without which there is neither individual life, nor community.

Less than a month later, President Kennedy was dead. Fifty years later, what he envisioned has yet to be achieved.

Having recently driven many miles across one stretch of America talking to poets and artists, I think it’s still a vision with great promise, and to slightly mangle a famous poem, though we have miles (and miles) to go, it’s a promise we should keep.

Editor's Note: A version of this article first appeared in Volume One, Eau Claire.

Max Garland is the author of The Word We Used for It, winner of the 2017-18 Brittingham Poetry Prize.