Wisconsin roads – particularly rural roads – are in urgent need of repair. Poor road conditions can cause damage to passenger and freight vehicles alike; AAA estimates that American drivers pay $3 billion annual in pothole repair alone. As state legislators currently debate the details of the transportation budget, road repair is a topic on everyone’s mind. A less commonly discussed facet of transportation is the additional stress climate change is placing on our roads, and how this affects Wisconsin residents and important sectors of our economy such as agriculture.

Michelle Miller, Associate Director at the Center for Integrated Agricultural Systems at UW–Madison, has conducted extensive research on transportation issues related to climate change and the agriculture sector, both in Wisconsin and more broadly. Miller says that extreme weather, fueled by climate change, is taking a toll on our nation’s roads and disrupting transportation in multiple ways. She points to a 2015 US Department of Transportation report that indicates how extreme storms, which used to happen once a century, are now expected to occur with increasing frequency, as often as every three years by 2080. Extreme heat, another hallmark of a changing climate, means that roads deteriorate faster, truck tires are more prone to blow out, and rail tracks more easily buckle. 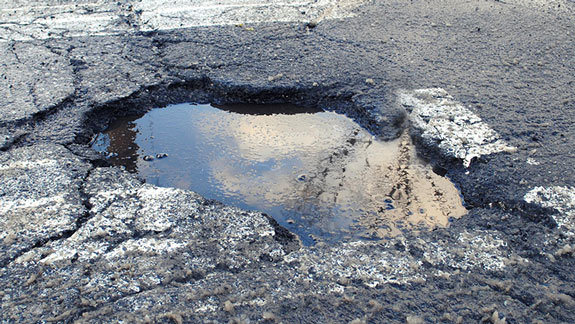 Of all these climate-change fueled transportation issues, Miller says that rural roads, which are the roads that move food from the field to market, are in the greatest jeopardy. Miller says that,

According to a number of interviews conducted with agricultural leaders in 2015, there are increasing concerns over extreme weather, agriculture, and transportation. One interviewee noted that as farms have grown larger and livestock more concentrated, agricultural machinery and vehicles have become too heavy for rural roads as originally engineered. Another interviewee observed that rural road washouts are increasingly common as heavy rainfall pummels under-maintained roads.

Miller points to the Wisconsin Institute for Climate Change Research (WICCI) report that projects that, by 2050, our winters will be significantly warmer and heavy rain events more frequent (see Figures 1 and 2). “Changes in precipitation, temperature and extreme weather events may impair transportation and supply chain infrastructure. Floods can close and damage roads. This is especially true in parts of Wisconsin prone to flash floods, such as the Driftless Region,” she says. 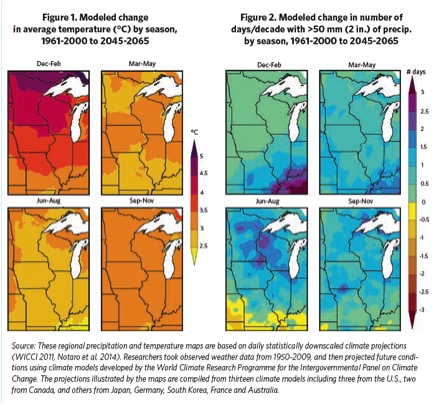 Miller connects the dots as to how climate change will impact Wisconsin’s farmers:

Wisconsin roads are of high importance in the nation’s transportation network for agricultural freight (Lin et al. 2015). From farm fields to terminal markets, U.S. agricultural freight moves primarily by truck (Blanton 2015). Grain – a category that includes many important crops grown in Wisconsin such as corn, soybeans, wheat, oats, and more – for export travels by different modes depending on its ultimate destination. In 2013, about 45 percent of U.S. grain destined for export was moved by barge, 35 percent by rail and 20 percent by truck to outgoing ports (Sparger and Marathon 2015). In the Upper Mississippi River Valley, grain for export to markets via Atlantic shipping is trucked to barges that travel down the Mississippi River. Grain destined for Asian markets and ethanol heading to West Coast refineries travels via rail. Variations in the spring and fall that impact ice cover may affect barge traffic, and therefore agricultural truck freight may become more important in the Upper Mississippi River Valley (Attavanich et al. 2013).

While Miller acknowledges that markets drive farmers’ production decisions, she notes that “extreme weather events coupled with changes in rainfall and rising temperatures may reduce yields and shift cropping patterns northward (e.g., Attavanich et al. 2013, Blanc and Reilly 2015, Zhuoting et al. 2012). A changing climate will affect crop yields and shift growing seasons and patterns. This will in turn affect how and where crops are transported, altering demands on Wisconsin’s transportation infrastructure.”

Just as Wisconsin’s agricultural sector is preparing and planning for changes in temperatures and precipitation due to climate change, our state’s transportation sector could benefit from similar foresight. There is a lot of money at stake in the current transportation budget talks, but no plan under consideration for how we will adapt to climate change. The success of agriculture, a key sector in our state’s economy, depends on adequate road networks to move product quickly to market. This summer, we have already experienced many storms, big rainfall events, and repeated flooding. The impact of these stressors on rural roads and economies can be explored further in transportation planning.

Michelle Miller is Associate Director at the UW-Center for Agricultural Systems, the sustainable agriculture research center on the Madison campus. As a practicing anthropologist she engages in participatory research with Wisconsin farmers and UW researchers.