Even though global warming is a politically polarizing topic, it’s worth considering some areas of common ground—both figuratively and literally—when it comes to how we manage the carbon dioxide (CO2) that we’re releasing into the atmosphere. Natural carbon storage, for instance, is a win-win for Wisconsin’s citizens, our land, and the global climate, and the type of common sense solution we can all get behind.

To understand natural carbon storage, it’s important to recognize that carbon naturally cycles between different reservoirs on the planet: the atmosphere, oceans, biosphere, and geosphere. We can think of it like a budget: the carbon stored in one place generally offsets carbon naturally emitted in another place, creating a sort of carbon equilibrium. However, too much carbon moving into any one of these reservoirs—especially the atmosphere and oceans—can wreak havoc on this delicate balance.

Carbon overload happens when we have too much input from sources, and not enough capacity in sinks in which to store the carbon. Since the Industrial Revolution, scientists have measured more and more CO2 accumulating in the atmosphere through the burning of hydrocarbons long-stored as fossil fuels such as oil and coal. Meanwhile, by removing and degrading important ecosystems that act as carbon sinks, such as forests cleared for lumber and prairies converted to farmland or urban use, we diminish our capacity to remove carbon from the atmosphere.

Just as humans can manage the sources of CO2 we add to the atmosphere, we can also play a big role in managing carbon sinks that can take up and store CO2. Forests, for instance, are important biological sinks in which carbon is stored long-term in wood and soil. Sustainably managing forestlands and working to preserve large tracts of forests are two ways in which we can help to decrease levels of atmospheric carbon.

Prairies, where the majority of carbon storage is in the soil, were once massive biological carbon sinks. However, the USGS reports that since 1830, tallgrass prairie in Wisconsin has decreased over 99%, greatly diminishing our capacity for capturing carbon. In addition to preventing further agricultural or urban land conversion, landowners can help increase our natural carbon storage capacity by working to restore prairies, forests, and wetlands.

Farmers are active land stewards. It is in their best interest to sustain the soil because it in turn sustains them. More than many other professions, farmers are intimately linked to long-term changes in the weather. When someone makes a living off the land—and provides food and resources essential to others—long-term thinking is about sustainability in every sense of the word. Many farmers are already implementing common sense land management practices for storing more carbon, though there are many other opportunities. We’re only currently tapping about 10% of the soil carbon storage potential in U.S. cropland, and there’s a lot more we can do to maintain health of our environment, locally and globally.

Farmers can help store carbon through agricultural management techniques that sequester CO2 while yielding clear benefits to their businesses and communities. Specific practices such as agroforestry, use of cover crops, and no-till agriculture can improve soil health and resilience, while storing carbon. 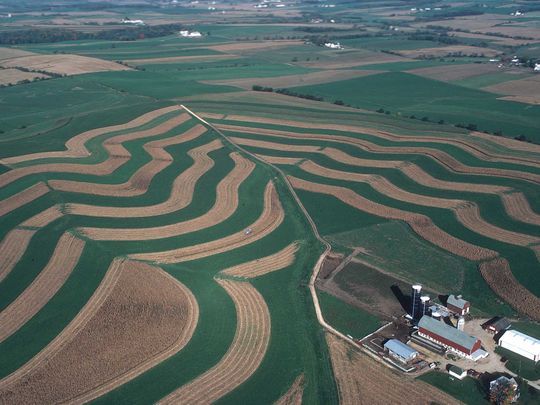 Agroforestry, a land management practice where trees are grown amongst crops or pasture, can promote long-term carbon storage through soil stability and increased root growth. Using cover crops—crops that are intentionally planted but not intended for harvest—can increase organic matter and fertility in the soil, support the ability of soil to hold and supply nutrients, and support diverse microbe communities that help store organic matter as soil carbon. Another popular technique, no-till farming, entails less disturbance of the land. This lowers the rate of organic matter decomposition, limiting the release of greenhouse gases back to the atmosphere.

These management techniques have many benefits beyond carbon storage. Agroforestry can lead to increased yields due to improved crop shelter, and also enhance biodiversity by providing a habitat for wildlife. Since bare soils are much more susceptible to wind and water erosion, keeping a continuous cover of vegetation (by planting cover crops) can provide more stability, increasing resilience to floods and droughts. No-till agriculture also minimizes soil erosion and maintains soil fertility.

Reducing erosion of rich top soil, maintaining soil fertility, and building resilience to droughts, floods, and extreme weather events (which are becoming more frequent and intense) are practices that make sense to implement locally. These actions also lessen our contributions to climate change. Working in these natural carbon storage systems can simultaneously help us mitigate and adapt to climate change and increase our resilience, while feeding our communities and sustaining rural economies.

When a renewed sense of urgency for soil conservation emerged during the Dust Bowl of the 1930s, Wisconsin became the first state in the nation to trial an erosion control project, introducing contour strip cropping in the Coon Creek Watershed. We’re the state that prides itself on inspiring Aldo Leopold’s land ethic. We can continue to lead on pragmatic land management. By avoiding further land conversion that releases stored carbon, and adopting agricultural practices that promote crop health and resilience, land stewards in Wisconsin can invest in long-term sustainability, both in their own rural communities and more broadly.