An interview with Milwaukee poet and scholar Angela Sorby 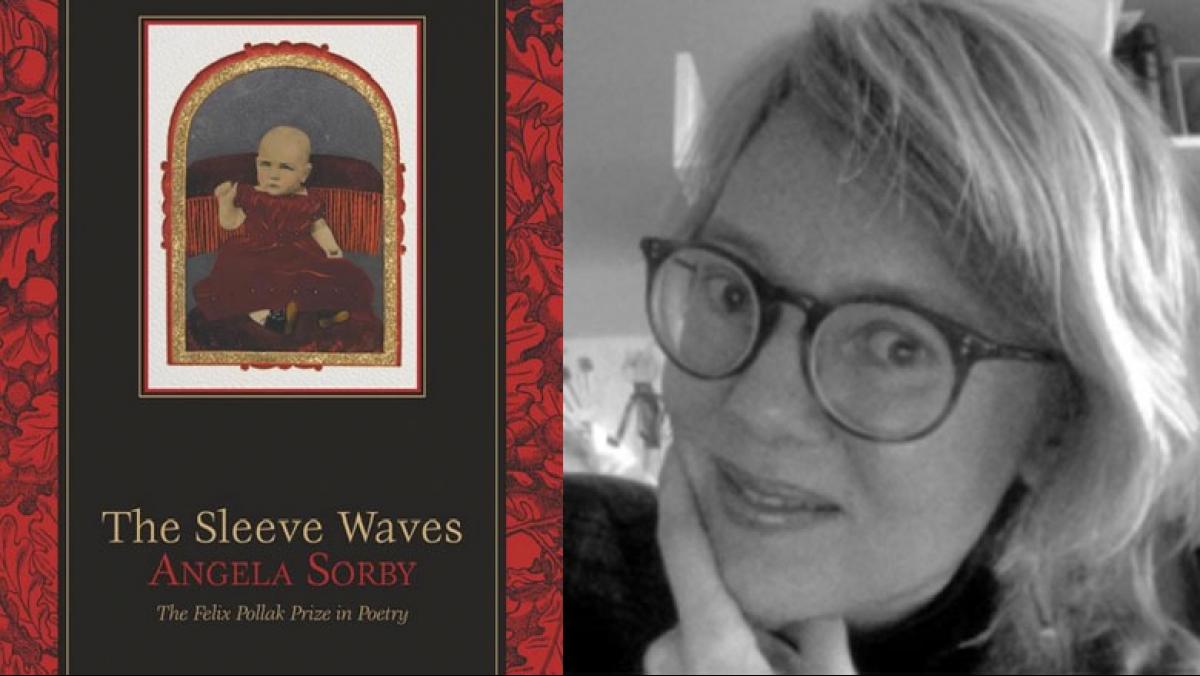 First off, congratulations on your collection The Sleeve Waves winning the Felix Pollak poetry prize. To borrow a musical term, I feel that there is lot of riffing going in these poems, like there are these intense clusters of meaning and sound punctuating the rhythm of your verse. What role does music play in your writing or process?

I have an uncanny ability to remember song lyrics—a skill that takes up all the brain space other people devote to useful knowledge. If you can’t remember the lyrics to “Hotel California” or “Good King Wenceslas,” I’m your gal.

This neurological glitch has an upside, though, because it helps me write poetry. My poems are composed of audible patterns, like songs, and as I compose them I read them aloud to myself. In structure and effect, my favorite poems tend to be lyric fugues, closer to songs than they are to prose narratives.

That said, there is a huge difference between poetry and song lyrics. When I see Bob Dylan songs included in a poetry anthology it makes me crazy, because it’s like putting a cat in the dog circus.

In addition to being a published author and poet, you are a literary scholar and associate professor of English at Marquette University. What is it you enjoy about teaching?

I love teaching creative writing because the workshop method allows for a very non-hierarchical class structure. It can seem slow and repetitive at times—sitting in a circle, reading poem after poem—but after a few weeks people begin to find their own voices.

This is an intimate process that involves a lot of practice and a lot of risk. And then suddenly, at least a few times every semester, someone writes a poem that blows everybody away. When it happens, everyone can tell—but how it happens remains a mystery.

I am more pragmatic than romantic most of the time, but the creative process always feels a little magical. Faculty members are supposed to list pedagogical objectives on their syllabi, specifying exactly what students can expect to learn, but that’s not how poetry happens. The best poetry comes unexpectedly, from unexpected places.

You were awarded a Fulbright scholarship to spend a semester teaching American literature in China. Can you tell us about your curriculum?

I taught two graduate courses in China, and I also had weekly coffee chats with a subset of particularly enthusiastic students. They were, or at least politely pretended to be, fascinated by my (tame) “wild” experiences as an American high school student. Their own teen years had been defined by a standardized-test-based curriculum with little room for self-expression or experimentation. At the same time, they were incredibly hard workers with a deep and detailed knowledge of their country’s past.

I remember I taught one class on Billy Collins’s poem, “Reading an Anthology of Chinese Poems of the Sung Dynasty, I Pause To Admire the Length and Clarity of Their Titles.” Everyone laughed because, as they pointed out, Sung Dynasty poems do not have titles. First lines must thus function as titles, which accounts for their perceived length.

And—speaking of poems with first lines as titles—I also flew around the mainland giving lectures on Emily Dickinson. My Chinese professor-hosts ran the gamut from smug Stalinists to chain-smoking dissidents, but everyone responded to Emily Dickinson. Graduate school taught me to distrust the concept of universality, but I must say Dickinson comes close—and she especially resonates with readers who feel confined by strict social and linguistic codes.

You recently published (along with University of North Carolina–Greensboro American Literature scholar Karen Kilcup) the comprehensive and much lauded collection, Over the River and Through the Wood: An Anthology of Nineteenth-Century American Children’s Poetry. What is so compelling about poetry from the golden age of children’s verse?

Certain nineteenth-century American poems—“A Visit from St. Nicholas,” “Mary’s Lamb”—remain among the best-remembered texts in the language. But while I was researching my critical book (Schoolroom Poets), I kept encountering delightful verses that languished in obscurity. For instance, here’s one from 1890 by Laura Richards:

The owl and the eel and the warming-pan,
They went to call on the soap-fat man.
The soap-fat man he was not within:
He’d gone for a ride on his rolling-pin.
So they all came back by the way of the town,
And turned the meeting-house upside down.

Karen and I spent many years combing through old books and magazines, and I’m afraid we developed an addiction. The collection would have been 1,000 pages long if our editors at Hopkins had not intervened.

To what degree does your life in Milwaukee inspire or influence your work? Are there other Wisconsin poets you admire?

Fifteen years ago, when I applied for the Marquette job, I’d never actually been to Wisconsin. My whole extended family is from Seattle.

However, one of my grandfathers was born in Beloit and left for the West Coast during the Depression, to pick apples. He was a rabid Green Bay fan and, after he died, we positioned his false teeth on the television during Packers games. So in a way, moving here was like—to misquote a John Denver song that I can’t shake—“coming home to a place I’d never been before.”

I’ve been busy raising three kids in Bay View, and seldom venture beyond Puddler’s Hall, but I do admire the work of many Wisconsin poets from afar. The late Lorine Niedecker was phenomenal and I think Rebecca Dunham is an heir to her creative lineage. I’m also constantly amazed by the pro-poetry energy pouring out of Madison from folks like Susan Elbe, Sarah Busse, and Wendy Vardaman. And I also admire Ron Wallace and Mark Kraushaar, who understand that poetry doesn’t have to be dead serious to be serious.

Angela Sorby is the author of three poetry collections: Distance Learning (1998); Bird Skin Coat (2009); and The Sleeve Waves (2014), winner of the 2014 Felix Pollak Prize in Poetry from the University of Wisconsin Press.