Something there is that doesn’t love a wall,
That sends the frozen-ground-swell under it,
And spills the upper boulders in the sun,
And makes gaps even two can pass abreast.

In Laken’s collection of eight stories, everyone is in some way negotiating their own emotional and psychological wall. As the stories unfold, some of these barriers are erected and others are smashed. This clever barrier metaphor plays out through the title of the book as well as through the use of the Cold War-era Russians that populate the stories.

One of my favorite stories from the collection is the sprawling “Map of the City.” On the cusp of the fall of the Soviet Union, a female American exchange student in Moscow has second thoughts about her planned cultural immersion and seeks the safety of Western life within the city. The uncertainty of the revolution on the streets paired with the creeping power of Western-style consumerism bring to end her quest for some kind of Soviet authenticity. After months of bedbugs, inadequate food, and chintzy clothing, she finds herself at an apartment party for global expats. The young student laments the forced austerity by which she as a mock-comrade must abide and questions her capacity to deal with the harsh Moscow winter:

I sit studying them from a corner of the futon. Part of me is revolted, but there is another part, the groupless part. The language coming out of their mouths is perfect and swift and takes no effort to follow. They have normal food like potato chips and beer. I saw bananas and a box of Frosted Flakes in the kitchen … In the winter like this, when the light lasts only six hours a day, and Christmas is coming and you are just twenty-one … you can try to escape yourself, but you are still here.

Laken has lived and worked in Moscow, Russia, as well as in Poland and Czechoslovakia, and her canny ability to convey that sense of an untethered Westerner in a foreign city must come from a depth of experience.

A central theme to these stories, too, is the “otherness” of those with extraordinary physical challenges: a blind twelve-year-old boy, a middle-aged amputee golfer, a bon vivant made comatose by a heart attack. To see the world through their eyes, and, perhaps more importantly, to have them see themselves reflected in the eyes of friends and family, gives the characters a tremendous emotional resonance.

Separate Kingdoms is in many ways a collection of stories by and about exiles. In the tradition of the great Russian novelists, Laken refines these tales of human longing and desire for connection into a captivating and excellent collection. 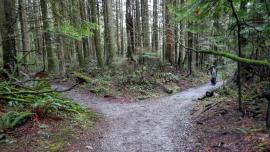 Fiction
Eyes in the Back of Her Head