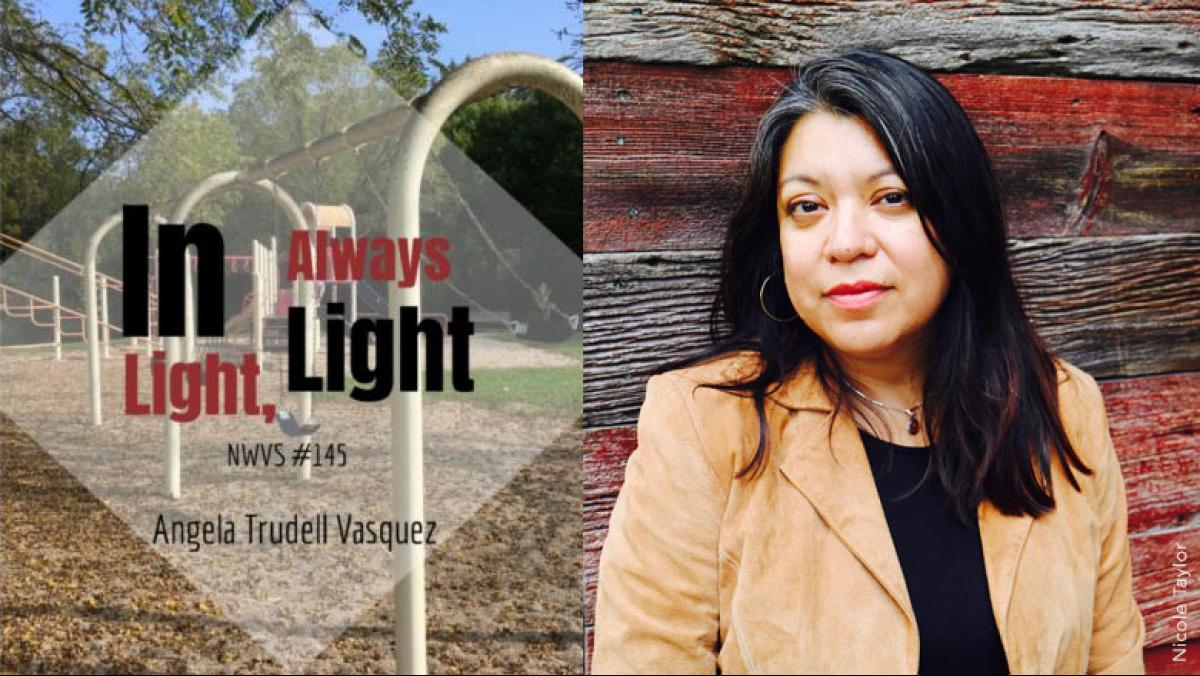 Spectral presences flit in and out of In Light, Always Light, Milwaukee poet Angela Trudell Vasquez’s first chapbook. Ghosts appear with purposeful messages, the voices of dead ancestors echo, and human remains float over a city. But In Light, Always Light is at the same time a very corporeal book, rich in the experiences of friends and family cooking and eating, planting and harvesting, working and playing, and, of course, dying. Trudell Vasquez is a careful observer of transformational moments both personal and cultural.

Midway through the book, her poem “Sea Burial” recounts the time when the poet and a companion traveled with only “backpacks… [and] a week of groceries” to an isolated island. There is “no hospital / for 200 miles” and “no wheels” available to quickly cover the great distance. Looking back on what can only be described as an early-term miscarriage, Trudell Vasquez writes of being comforted by “Female island ghosts” who spoke to her: “sit in the water let life wash out and back / cool stone slabs your throne. We know.” The way that Trudell Vasquez relates the experience makes for an intimate and stoic vision in which females have the last word, even if they are ghosts.

From this collection’s early pages, the poet’s acute socio-historical awareness is on full display. For instance, in “Arboretum” the lives of the poet’s family and forebears are considered in terms of the broad historical forces that excluded, even exploited, them:

These are the same people who attend to “an arboretum of sweet pink light. / Whose perfume carries itself uptown.” Their malefactors may not have included them in the census, but these people counted then—and, the poet reminds us, they count now. Their senses of beauty and purpose shine in Trudell Vasquez’s poem.

Similar concerns animate “What Sea Tentacles Did Not Tangle,” with its civilians trapped in war zones and dead refugee children washed ashore. Their “blood floods psychic landscapes ” while “world leaders” (Trudell Vasquez encloses these two words in scare quotes) pursue “piles of gold or oil” with their “store bought arms manufactured in the U.S.”

Trudell Vasquez speaks for those who have no voice, and her well-crafted poems face injustices both global and personal. Readers can feel the weight of deep moral center at work in this collection by a fine poet who deserves their regard.

Mark Zimmermann is currently working on a book-length poetry manuscript focused on his life in Japan, where he lived from 1990-1991 and 1993-2001.