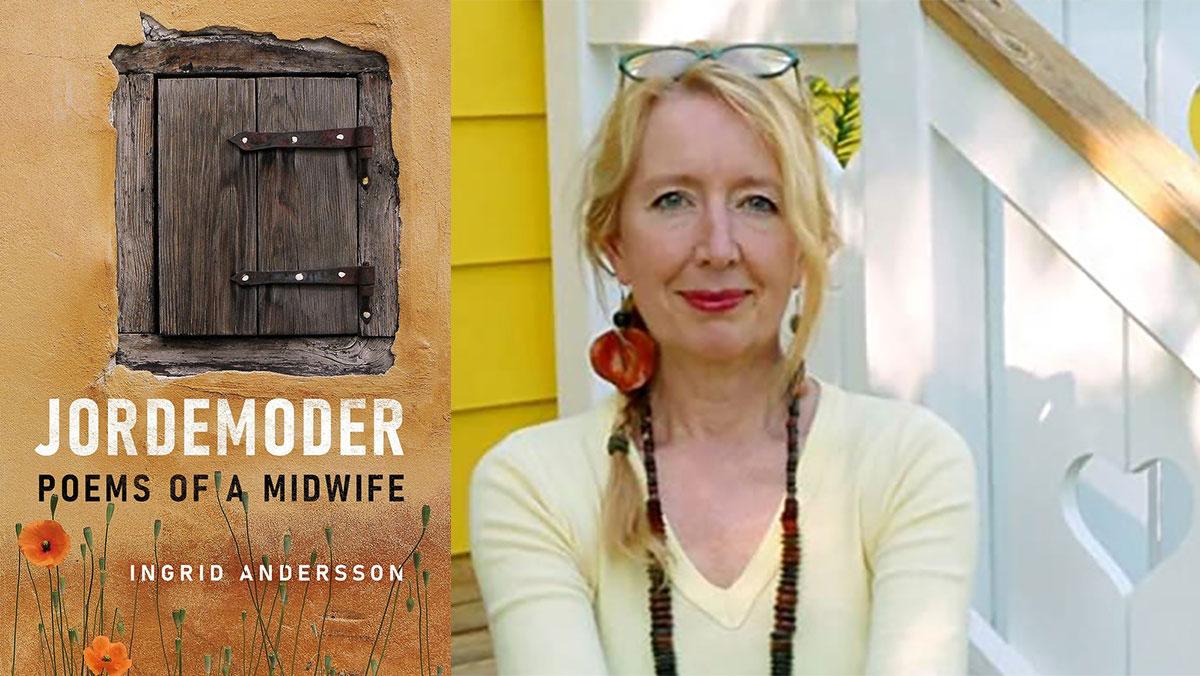 In Ingrid Andersson’s first collection of poetry, Jordemoder (the Swedish for “earth mother” or “midwife”), the poems serve as passionate witness to human experience, revolving around the subjects of home, immigration, the parent and child relationship, life, birth, and death. The book is organized into five sections: Daughter, Midwife, Mother, Invandrare (Immigrant), and Home. The collection is filled with beginnings and endings, and such surprising and difficult moments as in the poem “The Cycle” where predatory insects known as antlions remind the poet of a childhood companion turned murderer.

Jordemoder begins by introducing the speaker’s mother who saves graywater, fights for non-human rights, and requests a green burial. The poet witnesses both her mother’s fire and her frailty disappearing / into the maw of entropy and art.

Throughout, the poems provide fine particular details such as “pink opossum feet land like cherry blossoms beneath the suet feeder,” and sweep the reader into the eons with images of sandhill cranes as dinosaurs or the view from a hotel window of the ancient remains of mother and child below.

Most engaging is the Invandrare section. In the liminal poem, “Rauks,” the speaker happily dangles her “knobby feet“ over Baltic Sea cliffs, imagining their geology as brainstems:

“Still Life” recounts a memory of childhood and a mother who serves perfect cardamom buns to others but denies herself. Years later the speaker, on sabbatical in her mother’s home country of Sweden, rejects such self-denial and in a café in her mother’s Swedish homeland she chooses to take for herself

the loveliest bun I see, pour
self-serve coffee into an Ikea cup
and sit at a table with a real cloth
and she realizes
I want for nothing, but my mother
sitting with me.

In the poem, “Maieutic,” upon seeing a pregnant woman in hijab weeping, the speaker connects powerfully with the immigrant’s grief and isolation:

Sooner or later, everybody’s buffeted
to the margins in pregnancy, marriage,
war—all the mergings and expulsions
that we are made in, die in,
risk unknown borders for.

In contrast, “It Takes a Dog” captures a humorous and surprising encounter in a Swedish café with a stereotypical Texan who drawls words of wisdom and disappears before the startled speaker can respond.

At the heart of Jordemoder is the crossroads where the midwife works, the knife edge where a breath taken, or not, determines a celebration of birth and new life, or the loss and grief of death. Andersson inhabits that crossroads and writes from there with precision, empathy, and grace.

Catherine Young is a writer and performing artist whose work is infused with a keen sense of place. Trained in Environmental Science and Geography, Young has worked as a national park ranger, farmer, mother, and educator before completing her MFA in creative writing at UBC Vancouver.