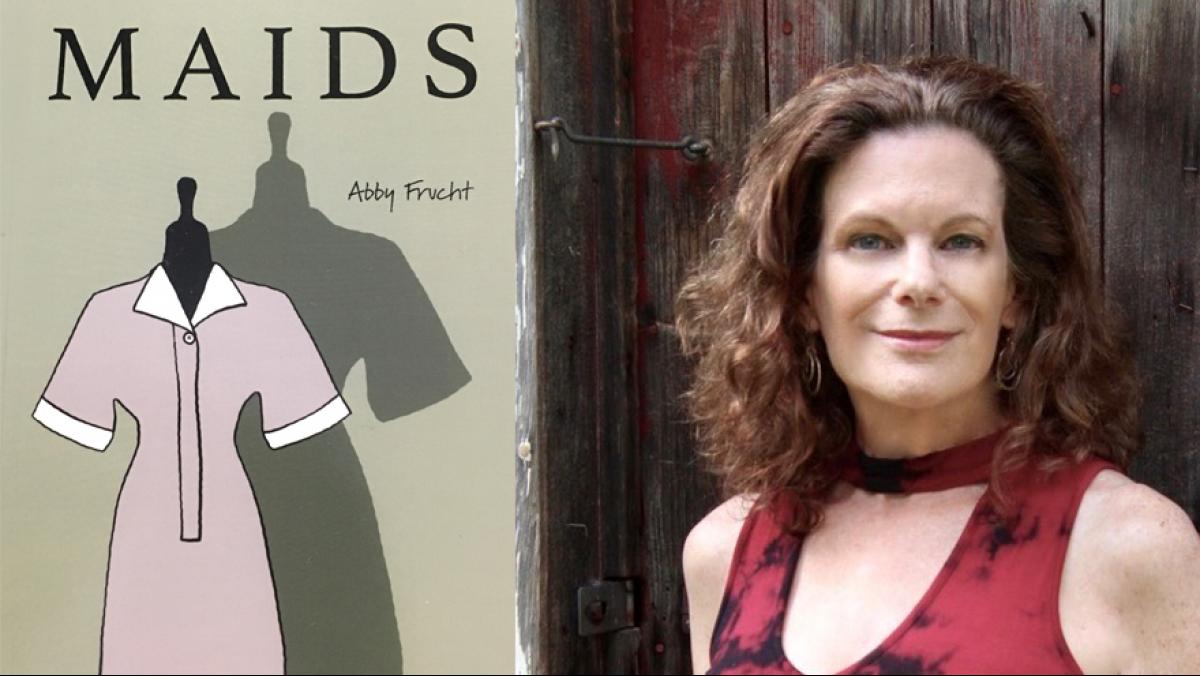 Maids is Abby Frucht’s first collection of poetry, and, as she says on her website, probably her last. Too bad for us, because this nationally known author and essayist has put together an astonishing collection that has been named a finalist for a slew of prizes, including the Robert C. Jones Prize for Short Prose and the Marie Alexander Poetry Series.

In these prose poems—essentially, little stories—Frucht’s narrator recalls the women who were hired to clean and do kitchen work in her parents’ house when she was a girl living on Long Island during the ’60s and ’70s. Most of the maids are women of color, such as Ida and Della, who are both “fired/let go,” terms the six-year-old doesn’t understand. But there is also the slender, fair-skinned, redheaded maid from Finland, “her face tranquil as teacups.”

The maid with the most resonance is Cynthia, who lives in the little room upstairs with the vacuum cleaner. The narrator recalls how Cynthia’s “reedy clarinet voice squeaked when she cried” as she thought about her daughter, Wanda, a little girl the same age as the narrator. Cynthia left Wanda in Saint Vincent and the Grenadines to work in the United States, and she sends her salary home so Wanda can become a doctor. Eventually Cynthia is fired for crying too much and sent back home. The narrator often wonders about Wanda, and later as an adult even tries to find her.

While Frucht is the consummate storyteller, what is startling and stunning about these poems is her use of imagery, her play with time, and her disruption of language, all of which cause readers to back up and go forward, never quite sure of their footing. These disruptions, though frustrating at times, deepen the meaning and perhaps reflect the narrator’s struggle to grapple with her privileged upbringing, as in this passage from “Occasionally”:

Occasionally what irks her is the question of
syllables since doctor’s daughter has too many
while she has too few not to mention commas
bug her because they cause a divide between
halves of a thought parts of a recollection
figments of emotion no more appealing than
mosquitoes they buzz in the middles of things
they have no business punctuating and in addition
metaphors.

It is the limited use of punctuation that gives these poems their power. The reader is asked to read and consider again what it is the narrator is telling her.

Time is fluid in these poems. The now-adult narrator slips into contemplating the racial divisions found in the Long Island of her youth, comparing them to her understanding of race in present-day Oshkosh, and then returns to the past to consider why she had no Black friends when growing up. Identity and privilege come up again and again: She is no longer “the doctor’s daughter,” but, rather, a newly divorced woman with a hysterectomy and breast cancer in her future—a future that “will make rather / a mess of some parts of her self.”

Yet humor is a sword Frucht uses to pierce the veil of racism and classism that hangs over her childhood.

Unlike rust tarnish is self limiting. Whatever. The
doctor’s daughter has no clue what self limiting
means perhaps … tarnish
is unable to stop itself from tarnishing from not
letting one see what is required to be seen in
it to be understood by seeing it such as really
it doesn’t matter so much the spirit in which
something happens as that it happens at all.

What shines through these dazzling poems is the voice of a person who is trying to transcend her learned sense of class, of racism and status. These poems will stay with you long after you’ve finished reading them.