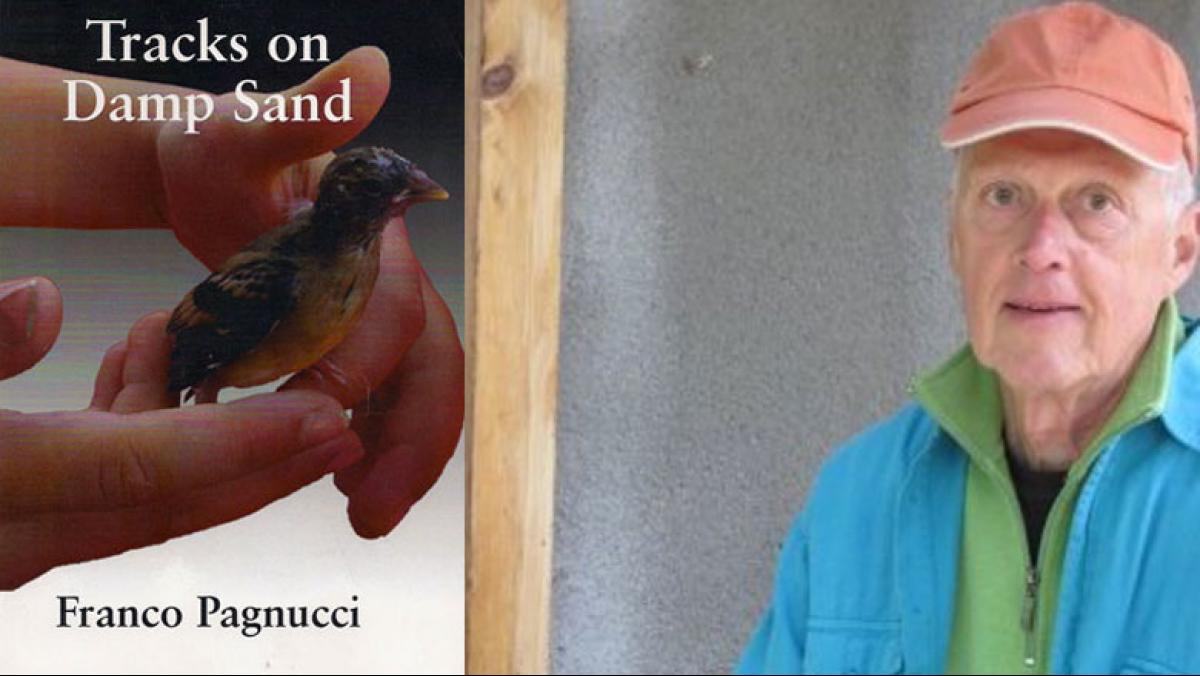 As someone who appreciates the writings of Henry David Thoreau, I have tried to imagine what it would be like to experience nature as he did in 19th century America, to have even a modestly similar experience as this: “I once had a sparrow alight upon my shoulder for a moment, while I was hoeing in a village garden, and I felt that I was more distinguished by that circumstance than I should have been by any epaulet I could have worn.”

Evocative expression is something we expect of nature poetry, but how is it successfully achieved?

The sixty-two poems of Barnes-based poet Franco Pagnucci’s Tracks on Damp Sand offer a lesson. His fifth collection of poetry seems to channel the spirit of Thoreau, evoking in the reader a sublime feeling of being a part of an organic whole, a melding of the human and the natural that seems almost ordained.

A good teacher doesn’t tell his students what to think, but awakens them to new thoughts and feelings. Tracks on Damp Sand sends us to the amazing classroom of the outdoors to face the nature of nature, to see with the poet’s eyes details so easily missed.

In this selection from “Love” we see how Tracks enables our humbling participation in nature’s expansive domain:

So, why shouldn’t I think of you,
how you saw that scarlet finch,
working between tufts of the spruce,
gathering cobwebs into a ball,

the sun brightening his scarlet throat,
and how you called me to the window?

Pagnucci also makes room for intimacy. In one poem “the lake skips,” in another “Dusk undresses in our windows.” In “Patience” we witness winter’s progress: “Today, in one place, the ice heaved under our feet like a great tingling shoulder, shifting in sleep.” In “Sometimes You Push Back the Curtains,” Pagnucci shares a poignant inevitability:

Sometimes you push back the curtains
and find the red fox
standing on a stump.

She looks at you
and you know
summer has slipped by

and the years,
Your mother’s age marks
are on the back of your hands.

The fox looks mottled
in her new gray with black spots.

The free verse and personal style of Tracks help the reader “know” the story. And touching yet energetic images emerge, as in the endearing matrimonial bungling in “You Heard,” where a male eagle struggles with a big stick in a great wind trying to impress the female with his building skills:

He rose above the white pine’s
peak and her whistles
and loosened his claws,

letting the long stick drop,
left of center, next to the trunk.
It settled well but dislodged
a couple sticks below it,
and they tumbled through the pine’s

branches, knocking and echoing,
like a screwdriver down a basement
stairs. When he dropped in next
to her on the branch, she shifted a little,
then settled back against his side.

Creating a sense of place is a strength of this collection, and it is Pagnucci’s artistry that brings immediacy to nature’s stage: roads, woods, hills, trees, bays, lakes with “milky ice-fringes along shore,” and skies topped with “an orange horizon.”

The human participants in these poems recognize themselves as part of the landscape. They own nothing, take nothing more than the creatures around them. For Pagnucci, nature has the power to stop us in our tracks like that sparrow on the shoulder, reveal what is important, and connect us to something larger.

Some say bald eagles
lay eggs in early March,
and we’d seen them,
now and then, hauling sticks
to the old nest,

but I was out and looked up
because I heard that whistle,
He was on her, and ever since
I’ve been mulling the fact
that she must have whistled.
—from “Early March—That Whistle”

There is a richness outside our doors that begs our notice. Franco Pagnucci knows that Thoreau’s sparrow holds indescribable power; with Tracks on Damp Sand he reminds us that we too can be “distinguished by that circumstance,” as in “All That Is Left”:

All goes silent
though I put these words around you

And nature is unmoved,
even if I love what green is left.

Claire Dulgar taught English, speech, and debate in the Anoka-Hennepin District (Mpls. suburb) for over twenty years and several years in smaller Minnesota towns.  Teaching plus raising three children left little time for writing, but she enjoys doing that now after retiring.