The Mansion of Happiness, by Jon Loomis | wisconsinacademy.org
Skip to main content

The Mansion of Happiness, by Jon Loomis 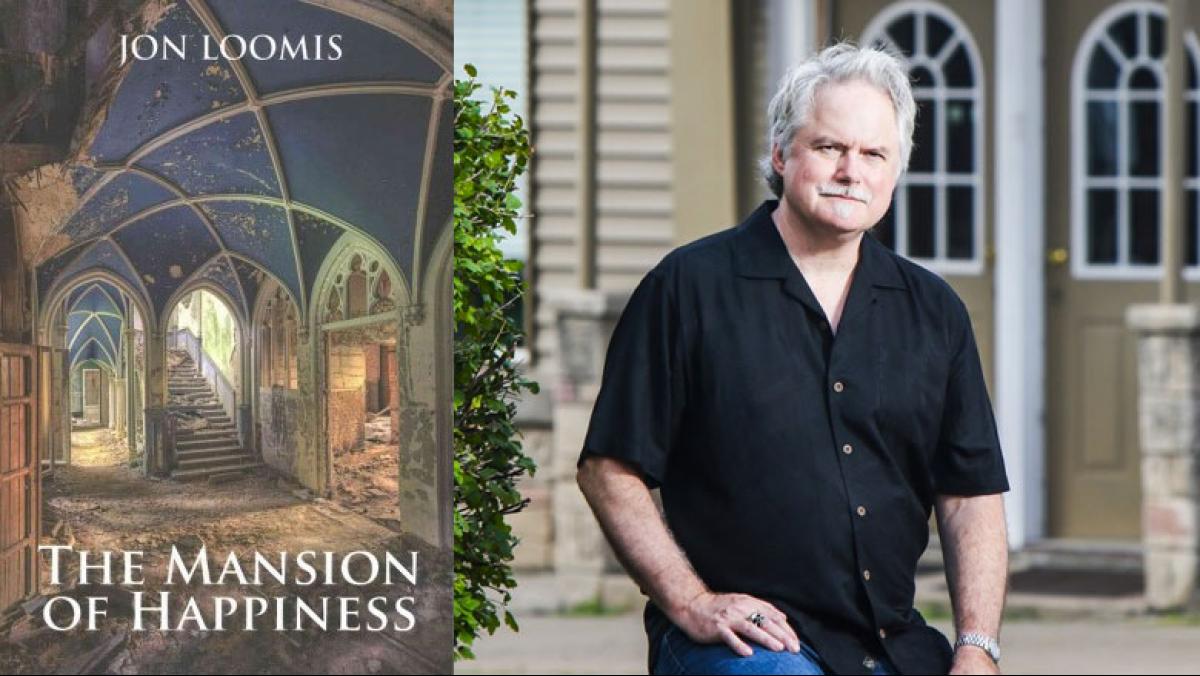 I’d never encountered Jon Loomis’ poetry before. But I was delighted to make the acquaintance of both poet and poetry at the Foot of the Lake reading series in the Thelma Sadoff Center for the Arts in Fond du Lac.

Winner of the 1997 FIELD prize in poetry, Loomis published his first and second books of poetry in 1998 and 2001 (Vanitas Motel and The Pleasure Principle, both by Oberlin College Press). He then turned his craft to writing mystery/detective fiction, creating four novels in the Frank Coffin Mysteries series during the 2000s.

Readers of Loomis’ poems will be thrilled to know he is back to poet-ing. With The Mansion of Happiness: Poems, his first book of poems in more than fifteen years, Loomis is sharper than ever. His verse reflects a self-deprecating sense of humor and a wry take on life.

The Mansion of Happiness begins with the poet/narrator’s demise, a familiar trope for most writers who find their grounding in writing about life, death, and love—and the myriad metaphors which lie therein.

I’m reminded, if briefly, of Cesar Vallejo’s “Black Stone Lying on a White Stone,” a poem mimicked by many poets. While Loomis’ narrator doesn’t name the day of his death as Vallejo does (a Thursday), readers are given many details of the day: bees and flowers, the colleague who may find him, the worry about what might be discovered on his laptop, what he should have said to his wife, his children. Then like a feinting saint, the poet rises:

… through the trees, look down from the steep
steel roof of the new student union. A small crowd,
my body—Jesus, I’m fat. Somehow I’m missing a shoe.

Written in free verse, these poems are mostly constructed in tercets. Many of them end in ellipses, as if there is more to say, more mystery, the poet wanting the reader, perhaps, … to fill in the blanks.

Though Loomis’ poems are often irreverent, there is always something more. The poet/narrator, seemingly befuddled by life, comes to conclusions somewhere close to stunning. The poems about his young son, especially, ring with perplexity, fill readers with tenderness. In the poem, “The Babysitters,” the narrator muses about the babysitters, young girls with their “tall, clean beauty.” Readers are left with:

But Henry, my little son,
what does he want, eyes soft
with desire? Come,

he whispers. Come up to my room—
I’ll show you my trucks.

For all of Loomis’ smart talk, there is the wonder of his imagery: “magenta scarf tossed over the day’s blue lampshade, “amber, rustling squadrons of monarchs,” “drapes paisleyed with mildew,” “the window’s violet // mouthful of sky,” “desire like a crown of napalm.”

Many of the poems deal with the art and craft and struggle of writing poems. In “Poetry Workshop: Course Objectives,” he lays it out, how poets should be:

We’ll shimmer like bats
in the treetops, commune with the dead,
decide what to do with our mothers,

turn mothers into cats, cats into flame,
flame into sorrow, nothing into the something,
that’s like the thing we would say if only

we knew what it was …

While Loomis begins The Mansions of Happiness with a poem about the poet’s demise, readers are brought full circle with his last, “If I Come Back,” a poem that imagines a second chance at life, a narrator who wants to return as a tree, a maple, “a crimson throb,” someone who might let the dog off the leash once in a while. Someone who might get it right this time. If only.