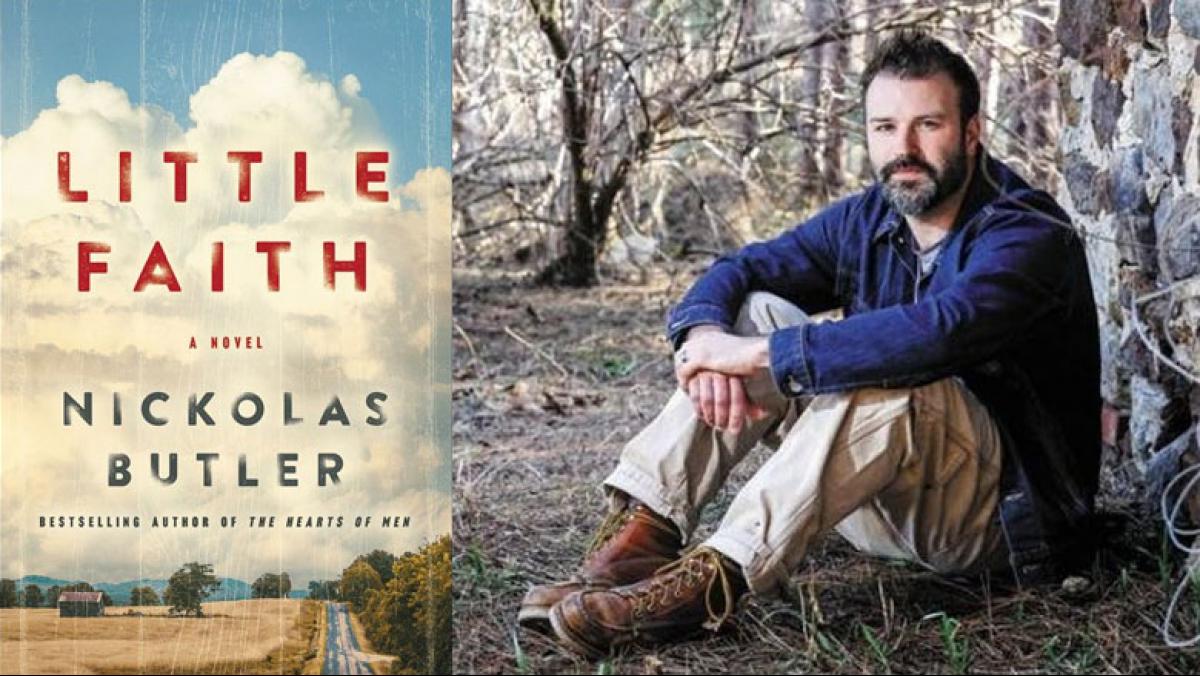 Here in western Wisconsin, pretty much everyone knows author Nickolas Butler—this reviewer included. The appeal of Butler’s writing is not found just in his Northwoods focus, but also in deftly drawn characters that remind us of our friends and neighbors. In Little Faith, Butler’s follow-up to the critically acclaimed novels Shotgun Lovesongs and The Hearts of Men, he returns to small-town Wisconsin. Here, in rural Redford, we meet 65-year-old everyman Lyle Hovde, a husband, father, and grandfather whose years as an appliance repairman hardly qualify him to fix the fractures in his own life. For decades, Lyle and his wife, Peg, have committed themselves to the code of rural life, helping friends and neighbors most days of the week while reserving Sundays for church.

Yet, following the death of Lyle and Peg’s nine-month-old son decades prior, Lyle’s faith has faltered; his church attendance is a routine that has less to do with the search for spiritual truth than the maintenance of appearances. Lyle is forced to confront his lapsed Lutheranism all over again when his and Peg’s adopted daughter, Shiloh, returns home from the Twin Cities with a son named Issac. The two begin attending a radical church led by the smooth-talking Pastor Steven, whose dogmatic insistence on faith healing over medical science leaves Lyle and Peg baffled—and afraid for Shiloh and Issac. The charismatic Pastor Steven (“The young man looked like the lead singer of a rock band”) believes Issac is endowed with the healing powers he promotes through his church. However, when the boy requires medical attention, Lyle and Peg’s concern for their family reaches a fever pitch.

As always, Butler treats readers to a wondrously rendered Wisconsin landscape, complete with church steeples and barns and “manifold fields of future corn or beans.” But Butler’s book shines brightest in its exploration of the interior lives of its characters. Taken together, his characters—Otis, the retired professor-turned-apple-farmer; Hoot, the Packers-loving best friend; and Pastor Charlie, a man as reliable in a deer stand as behind a pulpit—form a snapshot of rural Wisconsin. These are people we know, or wish to know, whose reverence for one another is as powerful as religion itself.  Each of them, though Lyle most of all, confronts the unknown with a profound humility, seeking answers in God as well as through their own good acts.

As in his previous books, Butler demands that readers confront the hard questions. Though this time, the questions feel more personal—and unanswerable—than ever. How far can a good man go before he risks his righteousness? And how can we love the sinner but hate the sin, especially if we ourselves are not saved? “The world,” Butler writes, “is filled with a near endless array of mysteries, and an even more infinite amount of guesses, grifts, lies, spiels, and here and there, almost hidden, a very few sacred handfuls of answers.”

Don’t read Butler’s stunning new work in search of such answers.  Revel, instead, in the questions.

B.J. Hollars is the author of several books, most recently Midwestern Strange: Hunting Monsters, Martians and the Weird in Flyover Country, The Road South: Personal Stories of the Freedom Riders, and Flock Together: A Love Affair with Extinct Birds.