Caring for a World Water Treasure

The Academy has commemorated World Water Day for the last several years through our Waters of Wisconsin Initiative. This year as we consider the waters of the world, let me urge those of us in the Great Lakes region to pay attention to the world treasure in our backyard.

One fifth of the world’s flowing fresh water is held in the Great Lakes Basin. Another fifth is held in Siberia’s Lake Baikal—the world’s largest lake by depth and volume. The Amazon Basin is host to another fifth, and the rest of Earth’s unfrozen fresh water is distributed across lakes, ponds and river basins around the world. Only a small fraction—3.5%— of Earth’s water is fresh water, and much of that remains icebound in the polar regions and the Earth’s glaciers. The salty oceans comprise the other 96.5%. For those of us among the countless species that can only survive on fresh water, the precious lakes, river basins and potable aquifers are the sources of life. Why, with this knowledge, would we put them in danger or take them for granted?

The new federal administration has proposed a budget that eliminates all funds for the federal Great Lakes Restoration Initiative along with making drastic cuts to EPA funding. If adopted, these changes would place the Great Lakes at greater risk than we’ve seen in decades. In the last few weeks my Facebook feed has included a regular stream of posts with photos of the tragic fires on the surface of Ohio’s Cuyahoga River in the 1960s as a reminder of why we need the EPA. But we shouldn’t need flaming rivers to justify thoughtful and intentional care for freshwater ecosystems, and safeguarding the Great Lakes is a lot more complicated than the steps it took to clean up the Cuyahoga following the enactment of the first Clean Water Act in 1972. 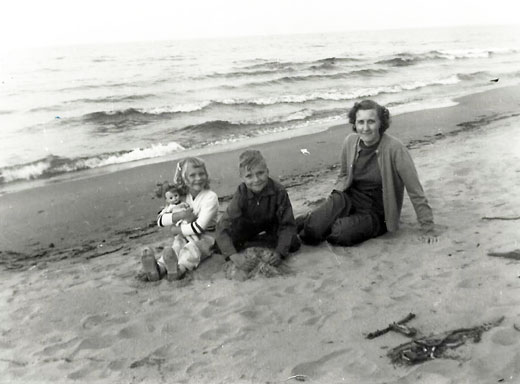 The magic of the Great Lakes captured me when I was five years old. A family vacation took us to my mother’s childhood haunts near Marquette, Michigan, and we explored the shores of Lake Superior. That old photo is of me, with my brother and mom on my first Great Lakes beach. I still get that grin on my face when I’m near the shining waters of these glorious lakes.

I’ve spent much of my career working to help keep them great, and to restore the damage done by pollution, invasive species, and carelessness. I’ve worked on wetlands protection, coastal zone conservation, establishment and protection of National Lakeshores and shoreline wilderness. I dedicated years to working on policy to get toxic chemicals out of the air and water and the Great Lakes food web through changes to the U.S. Clean Water Act and Clean Air Act (I still consider PCBs in lake trout as a personal affront). I battled for budget dollars for Great Lakes clean-up and restoration, for monitoring and research, and for environmental education. I worked to strengthen the Great Lakes Water Quality Agreement between the United States and Canada, and currently serve as a volunteer member of the Great Lakes Water Quality Board. Hundreds, if not thousands of others have made similar commitments, and we’ve seen progress from all those investments.

Toxic chemicals in Great Lakes fish and shorebirds have been declining over the last two decades and healthy birds of prey have returned to the shorelines. Natural reproduction in lake trout began to recover in Lakes Michigan and Huron about ten years ago.  Habitat restoration, much of it fueled by the Great Lakes Restoration Initiative, has begun to bring back important wetlands, shorelines and healthier tributaries. Still, there is much progress to make. We have seen the dramatic rise in nutrient-driven algal blooms in Lake Erie, Green Bay, Saginaw Bay over the last decade, as well as upheavals and crashes in the lake food web because of invasive species. We’re also seeing the rise of new types of pollution, from microplastics to pharmaceutical compounds. Then there is our rapidly changing climate, and increasing pollution and threats to habitat from intense storms that flush sediments and pollutants into near-shore waters and extreme swings between drought and flood conditions that disrupt habitat. Now is not the time to walk away. 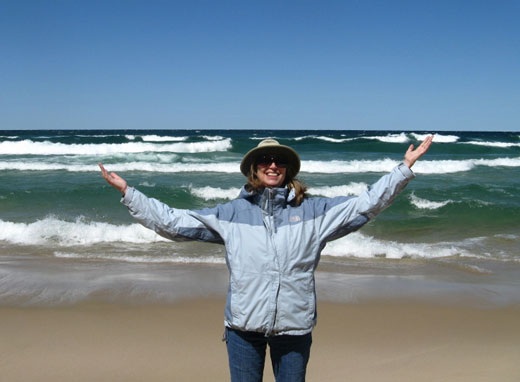 I’m committed to the lakes because I love them for their beauty, magic, and life-giving wonder. There is no Plan B for humanity and our fellow species if we fail to keep our waters alive and clean. There is no button to order six quadrillion gallons of clean fresh water and a complex freshwater ecosystem with an Amazon Prime account. The water on Earth now is the water we are going to have cycled and recycled forever, period (unless we intend to import water from another planet in the future). Our Great Lakes ecosystem is a living system, not some vast, lifeless cistern. Life, while resilient, has its limits. The lakes need vigilant care. Public investments in the waters that sustain us are safeguards for us and for future generations that depend on one of Earth’s most important ecosystems.

About the WOW Blog

Welcome to the Waters of Wisconsin blog—an ongoing conversation with Wisconsin writers, policymakers, farmers, scientists, and others about our state’s shared waters. Through this series, we aim to feature great ideas and poignant stories to explore what healthy, abundant water means to Wisconsin and her people.