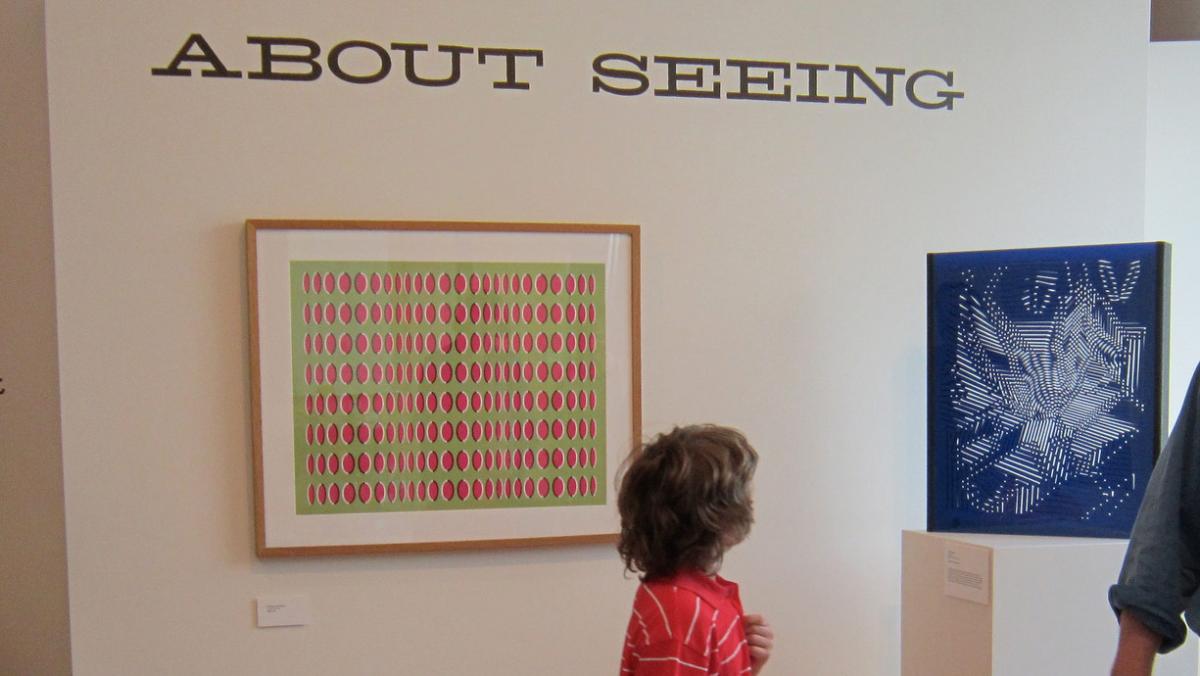 About Seeing is an exploration of the fascinating differences in how we see. Through works of art, interactive demonstrations, and a series of public programs, this exhibition considers the physiology of color and depth perception, synesthesia, and the effects of vision loss. Focused in depth on the work of artists Heidi Lasher-Oakes, Daniel John O’Neal, and Tom Linfield, the show also includes work from local collections by Chuck Close, Victor Vasarely, Richard Anuszkiewicz, Josef Albers, and Sylvia Mangold, among others.

When asked which of the five senses they most fear losing, most people answer “sight.” Visual artists, particularly, rely on their ability to experience the world through sight. Yet few of us understand the mechanics of vision, and we tend to assume that (barring significant eye disease) all of us are seeing the same thing. But the science of vision and perception reveals a more complicated story. Variations in color and depth perception, significant challenges like face blindness (prosopagnosia), and unusual perceptual abilities such as synesthesia, for example, all create visual experiences that challenge our assumptions about “normal” vision.

To illustrate the variety of visual experience, About Seeing includes works like South African artist Ilka Van Schalkwyk’s book Reading Color, a vivid demonstration of grapheme synesthesia, in which color is involuntarily associated with sound, words, or numbers. Chuck Close, represented by a piece made with paper pulp, has an idiosyncratic approach to portraiture that is strongly influenced by his face blindness. UW chemist and color researcher Rodney Schreiner’s computer simulations illustrate tetrachromatic vision, which encompasses more nuances of color than most of us see. Josef Albers’ seminal book on color perception, Interactions of Color, and artworks by Richard Anuszkiewicz and Victor Vasarely, among others, extend the show’s interpretation of optical illusions and depth perception.

The three artists featured in depth in About Seeing-- Dan O’Neal, Heidi Lasher-Oakes, and Tom Linfield—have experienced significant vision loss and used their visual art practice to document or work towards acceptance of their vision changes. The color palette of Dan O’Neal’s realist paintings has drastically changed since he developed macular degeneration in one eye, and he has also created a series of apparent abstractions which represent what he saw through his damaged eye. Heidi Lasher-Oakes kept a visual diary of her deteriorating vision that helped with the diagnosis of her rare eye disease, and used sculpture to express her fascination with the eye’s architecture as well as Braille type. Tom Linfield had severe strabismus, or lazy eye, in infancy and now sees through just one eye, which affects his depth perception. As a result, Linfield’s paintings often reflect his unusual sense of perspective. The work of these three artists demonstrates how an individual’s challenges with sight can inform and enrich our view of the world around us.

About Seeing is curated by James Watrous Gallery director Martha Glowacki in partnership with the McPherson Eye Research Institute at UW-Madison (MERI). MERI’s members include faculty in the sciences, engineering, arts, and humanities working to further vision research and share their knowledge with the public.

Listen to curator Martha Glowacki talk about the show on Wisconsin Public Radio's Audio Archives (scroll down to the entries for August 24, 2012).

Related events (free and open to the public):

Saturday, September 29, 3-4:30 pm
Color: More than Meets the Eye, a gallery talk and demonstration with chemist Rodney Schreiner.* Held in conjunction with the Wisconsin Science Festival.

Sunday, October 7, 2 – 3:30 pm
Gallery talk with artist Daniel John O’Neal and ophthalmologist Barbara Blodi* on the changes in O’Neal’s color perception after he developed macular degeneration, and the “eye-mind” relationship revealed through brain-imaging.

Heidi Lasher-Oakes was originally trained in sculpture and taught art at the University of Wisconsin-Stevens Point from 1997-2000. She has been challenged by a multi-system neurological illness, one of the first symptoms of which was vision loss. She now retains about 30% of her vision.

Madison artist Tom Linfield spent a large part of his life living in Europe, sketching stone circles and cairns, visiting cathedrals, and living in a medieval village called Cordes in the south of France. He is fascinated by the beauty and potency of these ancient, sacred stone formations, and their imagery continues to inform his work.

Daniel John O'Neal is a painter from Stevens Point, Wisconsin known for his meticulously rendered realist work in oils. He received a BFA from Western Illinois University in 1978, and an MFA from the University of Wisconsin-Madison in 1983.