When Bernard Gilardi died in 2008 at the age of 88 he had made nearly four hundred oil paintings. The fruits of a more than forty-year effort, these works were tucked away in the basement studio of his Milwaukee home, neatly stacked amongst files of preliminary sketches and the magazine and newspaper cuttings from which he drew inspiration. During his lifetime Gilardi hadn’t publicly exhibited any of his work. Ironically, it was Gilardi’s funeral that eventually brought his paintings out of the basement. A family friend attending the funeral at the Gilardi home saw his studio and told daughters Dee and Mary they should show their father’s work. This suggestion prompted the sisters to take photographs of a few paintings and send them to various galleries in the Milwaukee area.

Debra Brehmer, director of Milwaukee’s Portrait Society, was one of those who received the photographs. A contemporary art gallery, Portrait Society showcases both current and historic artists who work in portraiture. Brehmer called to inquire about the paintings immediately after looking at them. Soon she and artist Richard Knight, her assistant for the excursion, were descending into Gilardi’s basement studio and excitedly uncovering painting after painting. “We were down there with our mouths open,” says Brehmer. The two spent months in Gilardi’s basement studio, cataloging and photographing his paintings.

According to Brehmer, Gilardi is a rare example of a self-taught artist who, painting in his spare time, crafted not only a prolific amount of work—more than some professional artists—but work whose style and subject matter evolved over time. It’s even more incredible when one considers that he had no support group or critical audience from which he received feedback. His devout Catholic family mostly ignored his painting—to them it was simply “Bernard’s pastime”—or found the figures and faces he painted a bit too strange for contemplation.

Gilardi’s early work in the late 1950s reflected a conventional style of portrait painting. But by the 1960s he had “abandoned realist tendencies for inventive fantasy creatures and cartoonish scenes with punning titles,” says Brehmer. The 1970s saw even greater expansion of his subject matter, which ranges from “religious stories set in contemporary times and infused with gentle humor to imagined portraits and hybrid, fantasy animals.”

Gilardi’s style falls roughly within a “historic Midwestern tendency toward Magic Realism,” says Brehmer, a style that “tethered Surrealist tendencies to local landscapes and ideas.” Some other Wisconsin artists whose painting reflects this style include John Wilde, who passed away in 2006, and Sylvia Fein. More recently, works by artists such as Fred Stonehouse and Dennis Nechvatal seem to draw influence from this unique vernacular.

Though Bernard Gilardi was primarily self-taught, his style and his interest in artistic pursuits did not emerge from thin air. Indeed, Gilardi had wanted to be an artist since childhood, as evidenced by an inscription in his high school yearbook, “hope you become a darn good artist,” and his forays into formal art education—a semester in the Art Education program at UW–Madison in 1940 and a few courses at the Layton School of Art in Milwaukee in 1947. Later in 1947 Gilardi began a lithography apprenticeship with a printing company and went on to become a dot etcher (one who ensures that printed type and image colors render correctly). Brehmer believes Gilardi’s use of bright, saturated color in his painting was influenced by this work in the color printing industry.

Gilardi also visited art fairs and shows throughout his life and clipped articles about exhibitions and artists out of the paper. According to his daughter Dee, the exotic places Gilardi visited and the different people he met during his travels in North Africa and Southern Europe as an Army Air Corps radio operator during World War II influenced him greatly. The family also remembers Gilardi noting American artist Paul Cadmus (1904–1999), who worked in a Magic Realist style, as an inspiration. A few of Gilardi’s paintings even seem to nod toward specific Cadmus works.

With their vibrant color and fantastic characters, Bernard Gilardi’s paintings appeal to many different people. Brehmer says, “interest in the work has been surprisingly broad-based, almost like I've never seen before.” According to Brehmer, everyone from artists to middle-class buyers, self-taught collectors, and even a set designer in L.A., has purchased pieces by this prolific Milwaukee artist. “It’s rare that there is so much cross-over appeal in a body of work.”

Victoria Statz is the editorial assistant for Wisconsin People & Ideas magazine. She began working with the Wisconsin Academy as an intern in May 2011 after gradating from UW–Madison with a BA in English Literature. 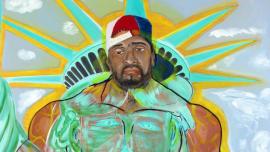 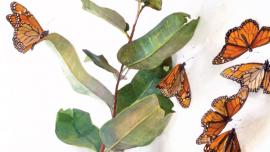